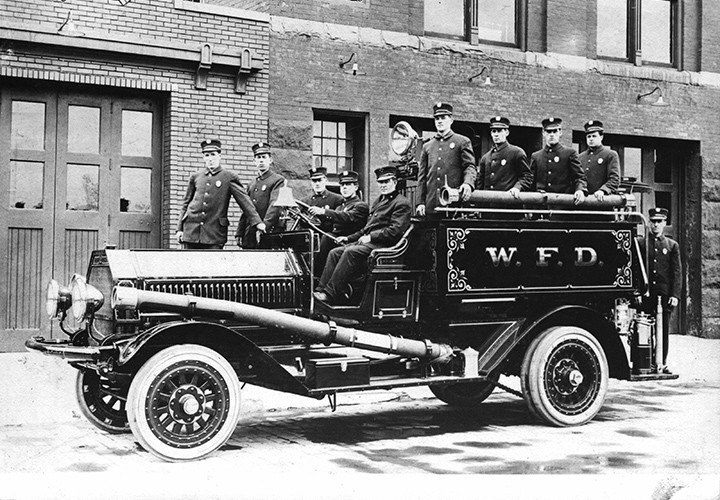 An important historical milestone was passed in mid-April, 2014. It was exactly 100 years ago that the Windsor Fire Department placed into service its very first piece of motorized fire apparatus.

After a slow, uncertain start in the early years of the 20th century, motorization of fire departments across the United States and Canada shifted into high gear in the `teens. Vancouver, B.C. was the first fire department in Canada to motorize, starting with the purchase of two motor hose wagons and a chemical car in 1907. Toronto, Ottawa and Hamilton all purchased W.E. Seagrave aircooled motor combination hose and chemical engines in 1911. Montreal began its motorization program by replacing the three horses that pulled its largest Waterous steam fire engine with a four-wheel motor tractor built by W.E. Seagrave in 1912. And so it went throughout the decade. By 1920 most cities and towns had retired their faithful fire horses in favor of much faster, far more efficient motor fire engines.

Purchased at a cost of $12,000 Windsor’s first motorized fire truck was placed into service at the Pitt Street headquarters fire station on April 14, 1914. Powered by a 96-horsepower six-cylinder engine, the shiny new engine had a rear-mounted 750 gallon-per-minute pump surmounted by a large hose box. Hard suction hoses were slung over the truck’s front fenders.

Almost immediately, Fire Chief George Murray discovered that the city’ three horse-drawn hose wagons were unable to keep up with the far faster motor pumper. So it was that in the following year, two locally-built Medard motor hose combinations were acquired to replace the horse-drawn hose wagons at the city’s west- and east-end fire stations. In 1916, a Menard motor tractor was purchased to replace the horses that pulled Windsor’s 1910 Seagrave aerial ladder truck. Despite the seasonal festivities, it was a sad day when Windsor’s last fire horses were put out to pasture on Christmas Day, 1916.

During the 1920s Windsor purchased three American-LaFrance triple combination pumpers equipped with pump, hose body and chemical/booster equipment on a single chassis. Except for a single aerial ladder truck, the W.F.D. purchased no new motor fire apparatus during the lean depression years. Following the Second World War and into the early 1950s, the Windsor Fire Department embarked on an ambitious apparatus replacement and modernization plan. Four new pumpers and two new aerial ladder trucks were purchased to replace outdated apparatus in service since the 1920s.

In 1977, four new pumpers were purchased to replace the hard-used postwar equipment. But the department’s largest single apparatus purchase was five Sutphen aerial towers – three 95-foot platforms and two 70-foot mini-towers – placed in service in 1998. Four of the 1998 Sutphen quints were replaced in early 2014. Coincidentally, Truck 4’s new Sutphen went into service at the College Avenue station almost 100 years to the day after the 1914 Seagrave pumper. Since that historic day a century ago, Windsor Fire & Rescue has purchased 97 pumpers, ladder trucks and rescue squads, as well as dozens of automobiles and light trucks used as chief’s cars, command and support vehicles, etc.

And what happened to Windsor’s first motor fire engine? Nicknamed “Old Mike”, the 1914 Seagrave pumper served the City of Windsor for 33 years, before it was retired and hauled off to the junkyard in early 1947. – Walt McCall