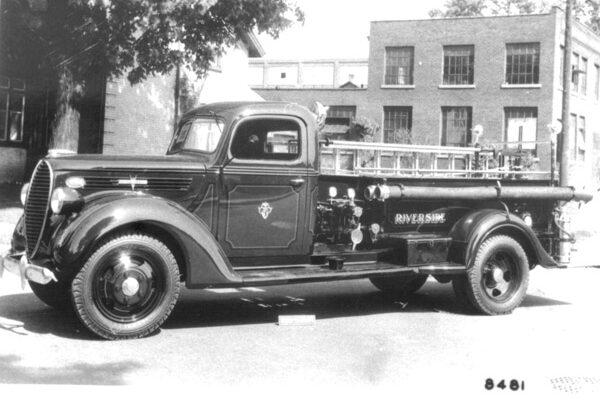 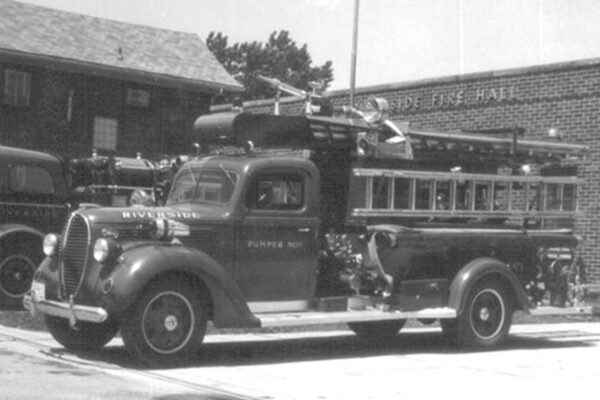 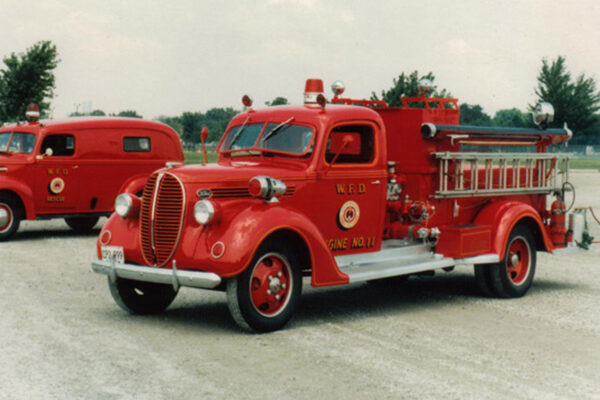 With the January 1, 1966 annexation by the City of Windsor of the former Town of Riverside and portions of Sandwich East and Sandwich West Townships, the Windsor Fire Department acquired seven pieces of apparatus formerly owned by these suburban, mostly volunteer fire departments.

The oldest of these was acquisitions was a 1938 Ford pumper then still in reserve service on the former Riverside Fire Department. Built by Bickle-Seagrave Ltd. of Woodstock, Ontario on a Ford two-ton truck chassis with a 420 gallon-per-minute Bickle rotary gear pump behind its closed two-man cab, the new pumper replaced a Model “T” Ford fire truck Riverside had purchased in the early 1920s.

Housed in a single-bay firehall in the Riverside Town Hall on Lauzon Road near Riverside Dr. E., the Bickle-Ford was Riverside’s only fire engine until a new American-LaFrance pumper was delivered in early 1956. Loaded down with extra equipment, including an overhead ladder rack and a booster water tank above its hose bed, old Pumper No. 1 continued to answer calls as the town’s second-out pumper. By the mid-1960s, however, the `38 Ford was used primarily as a parade and special events rig.

Following the 1966 annexation, the newly-enlarged Windsor Fire Department relettered the 28-year-old pumper Engine No. 11. During grass fire season, the vintage Ford was actually placed into service at Station 5 on the Third Concession. In the late 1970s the truck rig was repainted and City of Windsor decals affixed to the cab doors. Along with a 1947 Mercury ambulance and 1959 Elcombe pumper, the 1938 Ford was part of the W.F.D.’s growing vintage vehicle fleet, used for fire education purposes and parades.

Stored wherever a spare bay was available, the old Ford was moved from hall to hall. Most of the time it could be found in its later years in the back bay of Station 5 on Cabana Road. More than 60 years after it had been delivered to Riverside, the `38 Ford was sold as surplus to a local vintage vehicle collector several years ago. It’s believed to still be in the area.