Every family has a family album – a bulging book of nostalgic photos taken over the years. The most evocative of these is the family photo –you, know – the one with whole family gathered in one place, a rare occasion for most families with far-flung members and relatives.

In the fall of 1957, Windsor Star staff photographer Bill Bishop, in conversation with Windsor Fire Chief Raymond F. May, thought it would be a great idea to bring all of the Windsor Fire Department’s apparatus together in one place for such a group photo. Always cooperative, Chief May thought that it was good idea, too, and after some discussion plans were made and a date chosen in early December, to make it happen.

They needed a lot of space to do this, of course, and a suitable wide-open area was found in Jackson Park – ironically on the very spot where the park’s huge, wooden grandstand had burned to the ground just five months earlier, on July 13, 1957. Such an ambitious project took a lot of planning and coordination, of course, but arrangements were made to bring all of the apparatus and their crews from Windsor’s five fire stations to the park for the group photo. Along with the department’s front-line pumpers, ladder trucks, rescue squad and chief’s cars, the historic gathering included the W.F.D.’s three spare pumpers and its Civil Defense training pumper.

It must have been an impressive sight as more than 20 fire trucks streamed into the park on that sunny afternoon. As it turned out, there were simply too many rigs to include in a single photo, so they were photographed in two separate groups .

Something of a fire buff at heart himself, Star Photographer Bill Bishop took the photos with his bulky but trusty Speed Graphic – one of those iconic flashbulb-popping press cameras you see in old movies – from one of the department’s aerial ladder trucks, which later took its own place in one of the groups. The big family gathering – the last of its kind ever attempted – included the W.F.D.’s newest rig,– a 1957 Fargo salvage and rescue squad placed in service three months earlier – and its oldest, a chain-drive 1925 LaFrance pumper. The spares – older engines that filled in when the front line rigs were in the shop for maintenance or repairs – included a pair of 1929 and 1930 Bickle pumpers inherited from Walkerville and Sandwich, and the 1925 LaFrance.

Fortunately, no fire calls came in during the three-hour shoot, but all of the rigs were ready to immediately respond from the park if needed. Of the 20 pieces of apparatus in the photos, six are known to survive to day. Two of them – the 1947 Mercury panel truck ambulance and the Elcombe, a later 1959 rebuild of the 1927 Gotfredson-Bickle pumper – are still on the Windsor Fire & Rescue Service roster as parade rigs.

Bill’s photos were later published in an impressive two-page spread in The Star. Long retired, Bill remembers that day very well. “If you look closely at one of the photos, you can see my car parked in the background. Yes, it was a lot of work, but it was worth it”.

For the record, here are the rigs in the photos: 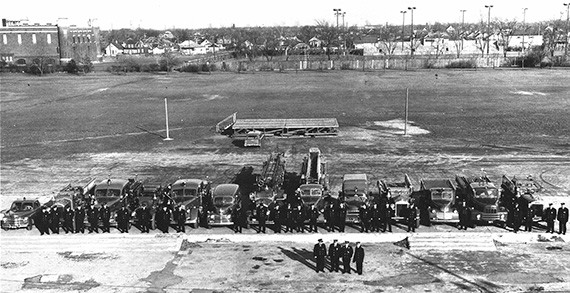 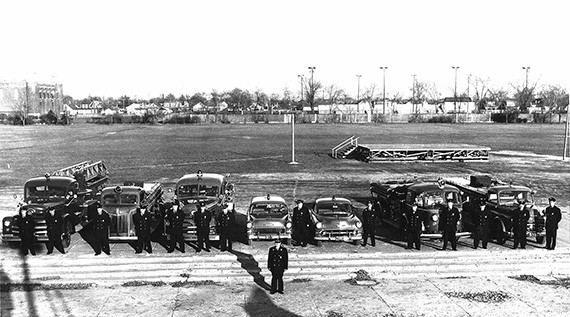 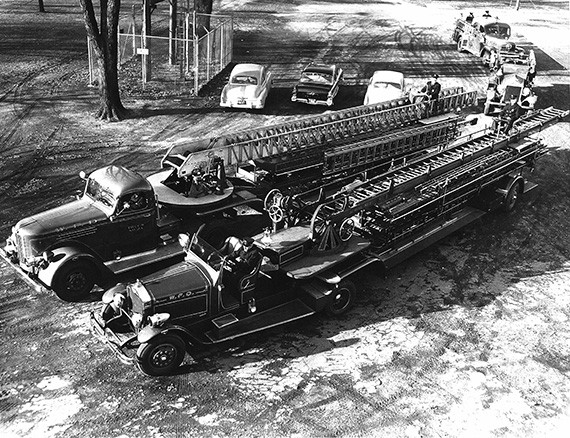