The force of water is great. Firefighters know this and it is why firefighting equipment must be constantly tested and checked. Equipment failure, sometimes preventable, sometimes not, could result in an unsuccessful firefighting task or a serious injury. On the morning of Saturday February 27, 1971 the forces of nature came into play when a fire broke out at the four-storey J. T. Wing building on Pitt Street East in downtown Windsor.Wind gusts of 100 Km per hour were being recorded when District Chief C. DeFields left an alarm call on McDougall Street in response to another alarm call on Riverside Drive. While proceeding east on Pitt Street, he was stopped by the cleaning lady in front of the J.T. Wing building, who informed him there was smoke in her building. Chief Defields went to investigate, as there was no smoke visible from the outside. When the door opened he noticed heavy smoke and immediately called in the fire at 10:46. 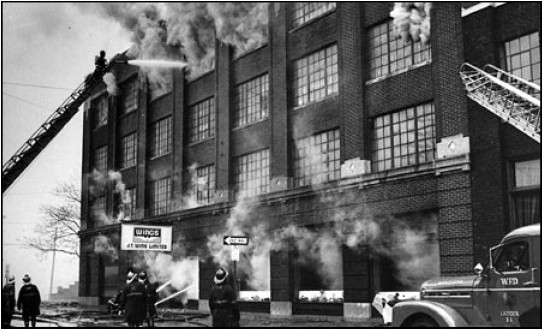 “Early in the fire” – photo courtesy Windsor Fire & RescueMeanwhile Engine 2 Captain R. Ferguson noticed smoke at the rear of the same building while at an alarm call on Chatham Street, and also responded to the scene. With wind now gusting to 140 Km per hour, firefighters, hampered by bricked-up first floor windows and heavy smoke with no visible fire, were unable to locate the source of the fire.By 11:20 a 4th alarm had been called giving Deputy Chief J. Malott 5 engines, 4 ladder trucks and 2 squads with about 50 firefighters. They settled in for a long defensive battle in frigid temperatures using the aerial ladders as water towers and operating several deluge guns.With two-thirds of the W.F.D. now on scene District Chief DeFields called headquarters to call in all off-duty firefighters to assist at the fire. Local television and radio stations facilitated this urgent request and firefighter Len Bondy was the first of over 30 to call and report he was coming in.

The day after his 33rd birthday, firefighter Bondy arrived at the station, picked up his gear and headed to the 4-alarm fire. At 5:57 p.m. he climbed up Ladder 4-A, from Station 1, which was extended 72 feet, to adjust the large nozzle or “ladder pipe” as it is called, from the tip of the aerial ladder.

The ladder pipe device is clamped to the rungs of the steel aerial ladder and supplied by a 3-inch hose, which rests on the ladder rungs down the middle of the ladder and is secured with leather hose straps. The firefighter operating the ladder pipe uses a handle to direct the large volume stream to the  areas of best advantage as seen from his position above the burning building.

While adjusting the ladder pipe at the tip of the ladder it suddenly broke apart. The barrel of the pipe broke away from the high-pressure hose causing it to whip around wildly, throwing Bondy off the ladder. He crashed head first into the wall of the building and fell the remaining 35-feet to the street. An ambulance on scene rushed him to the Hotel Dieu Hospital where he was pronounced dead from his injuries at 6:05 p.m.

Leonard Bondy, who was born in Windsor, left behind his wife Barbara, daughters Jacqueline and Judy and sons Charles and Ken. On Wednesday March 3 firefighters from Ontario and Michigan
silently marched through Windsor behind Bondy’s Engine 2, carrying his remains to Heavenly Rest Cemetery where he now lies under a maple tree.

Leonard Bondy joined the Windsor Fire Department nine years earlier in 1962 to replace  firefighter Gilbert Dupuis who had died in the line of duty. They both died in February answering the call and both wore Badge #16, which was permanently retired after the second incident. The Windsor Casino now occupies the location of the Wing Building, removing any reminder of that fire.

A new memorial to Windsor and Detroit Firefighters is being considered not far away on the waterfront.

He is a captain with the Mississauga Fire and emergency Services, which he joined in 1984. He is a recipient of the Ontario Medal for Firefighters Bravery, the 125th Anniversary of the Confederation of Canada Medal, the Queen Elizabeth II’s Golden Jubilee Medal and the Federal Fire Services Exemplary Service Medal. Robert is also the author of the book- Their Last Alarm, documenting the line of duty deaths of firefighters in Ontario. He is currently serving as the Regional Vice President for Ontario with the Canadian Fallen Firefighters Foundation in Ottawa.