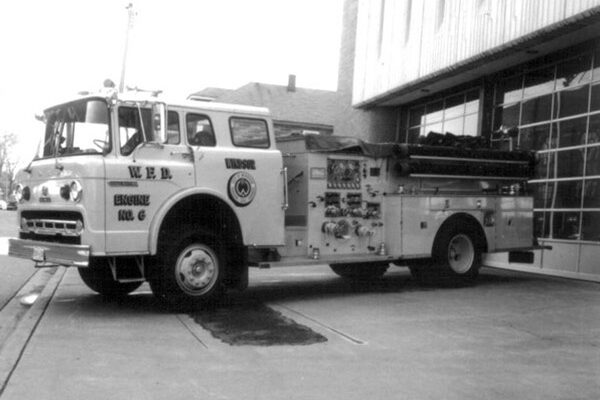 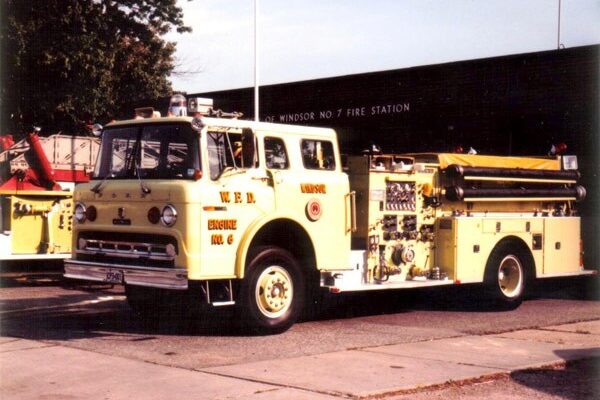 In 1970, a respected optometrist in Oswego, N.Y. released the results of a scientific study which concluded that yellow was a much more visible — and safer — color for fire apparatus than the traditional red, especially at night. A prominent U.S. fire apparatus manufacturer — the Ward LaFrance Truck Corp. of Elmira Heights, N.Y. — became the driving force behind a nation-wide switch from red to lime-green (or lime-yellow) fire apparatus, sparking what was perhaps the most heated controversy in the North American fire service since the motor pumper replaced the horse-drawn steamer.

The Windsor Fire Department clambered aboard the lime-yellow bandwagon in 1974. In May of 1973, the W.F.D. had ordered a new pumper from King-Seagrave Ltd. of Woodstock, Ontario. The original contract specified that the 1050 gpm pumper, on Ford C-9000 chassis, be painted the traditional fire department red. But before the completed pumper went into the paint booth, Chief of Apparatus Mike Koehl had the color changed from red to the trendy new lime yellow. Fire Chief Harold Coxon, very much aware of the ongoing controversy, said he was willing to try anything that might make the already dangerous job of firefighting safer for his men.

Thus it was that the W.F.D. took delivery of its first lime-yellow fire engine in early November, 1974* More than a dozen more lime-yellow pumpers, aerial trucks and rescue squads would eventually follow the `74 Ford onto the W.F.D. roster over the next twelve years. Purchased at a contract price of $43,635 and powered by a Detroit Diesel engine with Hale QLF pump and 380-gallon water tank, the new canopy-cab pumper was also the first piece of apparatus on the Windsor Fire Department with an automatic transmission.

Lettered Engine No. 6 on its cab doors, the bright-yellow pumper was officially placed into service at the W.F.D.’s Headquarters Fire Station on Goyeau St. on December 19, 1974. Three years later the King/Ford was displaced as the “first-out” engine at headquarters by one of four new Pierreville/Ford pumpers delivered in 1977. Engine No. 6 was then reassigned as the second-out, or “back” engine at Headquarters. With the delivery of two new Spartan pumpers in 1983, Engine 6 was moved to Station 7 on Lauzon Rd. In the early 1990s, Engine 6 went into second-line service as a spare. After two decades of faithful service, the 1974 King/Ford was retired and sold – still in its original trend-setting lime yellow paint – even though the Windsor Fire & Rescue Service had long since reverted back to the traditional red.

A Footnote: the author went along on Engine 6’s delivery trip on November 4, 1974, riding shotgun in the cab with Chief Mike Koehl at the wheel. After a thorough inspection of the new engine and a short test-drive, we departed the King-Seagrave plant in Woodstock at mid-afternoon and wheeled the shiny new pumper into the former W.F.D. shops on Richmond St. next to Station 2, at dusk. A few days later The Windsor Star ran a front-page photo of the new truck. Not everyone approved of the new color — which was disparagingly dubbed “slime green” by some detractors. It was an interesting era in fire apparatus industry history. Like Windsor, most departments eventually changed back to red or white-over-red apparatus. Very lime-green rigs are being built anymore.
– Walt McCall