A Century of “Sticks” 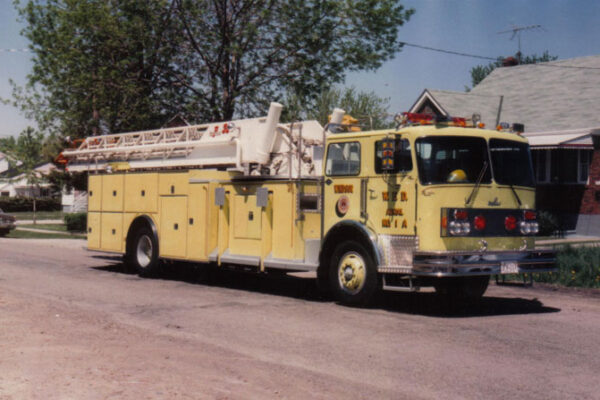 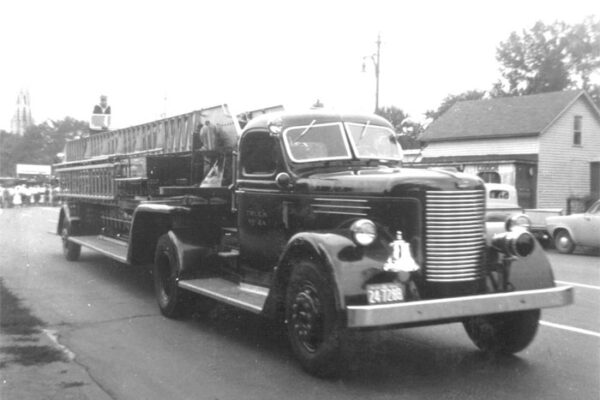 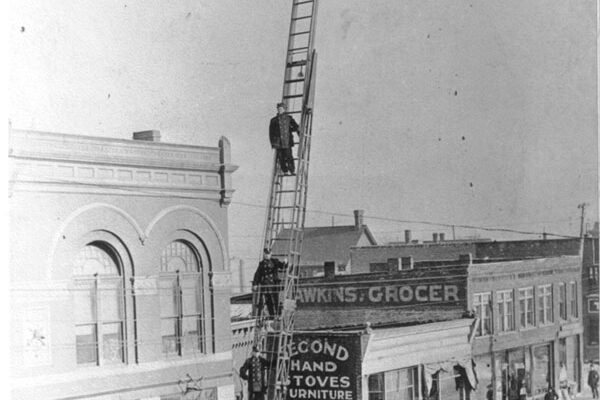 One hundred years ago, the Windsor Fire Department received its first aerial hook and ladder truck. Built by the W. E. Seagrave Fire Apparatus Company in neighboring Walkerville in 1910, it was a technological marvel at the time. Drawn by three horses, the huge (for the time) truck had a two-section, 85-foot wood aerial ladder that was automatically raised from its bed by a pair of powerful springs at its base. The upper, or fly, section was extended by turning handwheels on each side of the ladder, and the turntable on which the ladder was mounted could be rotated 360 degrees. Perched high above the ground, a tillerman steered the big rig’s rear wheels, Six years later, a Menard motor tractor replaced the horses.The 1910 Seagrave was the first of nine aerial ladder trucks to serve the Windsor Fire Department over the years. The second was another W.E. Seagrave acquired when Windsor annexed the former Town of Walkerville in 1935. Walkerville had purchased the motor-driven, tractor-drawn Seagrave 85′ aerial in 1913. The original Seagrave tractor was replaced by a locally-made Gotfredson truck tractor in the early 1920’s. Wrecked in a fatal accident on Walker road in 1927, this tractor was replaced by another Gotfredson.

In 1936, Windsor purchased a brand-new, tractor-drawn American-LaFrance 85′ aerial. Powered by a V-12 engine, this big spring-raised, tillered wood aerial was in service for 31 years. Retired in 1967, it’s still on the road today, owned by an antique fire apparatus collector in Illinois.

Windsor did not get its first modern power-operated, hydraulic metal aerial ladder until 1949. Built by Peter Pirsch & Sons of Kenosha, Wisc. it was also the city’s first 100-foot aerial and the first with a closed cab. The only one of its kind ever delivered in Canada, the big tractor-trailer, tillered Pirsch was retired and sold in 1978.

The W.F.D. purchased its first straight-frame, four-wheel service aerial in 1952. Built by Bickle-Seagrave Ltd. of Woodstock, this compact aerial had a closed three-man cab and four-section, 75-foot steel aerial ladder. Known on the job as the “junior” aerial, it was retired and sold in the early 1980s.

Fifteen years would pass before Windsor bought another aerial ladder truck. In 1967, the 1936 LaFrance was replaced by another LaFrance – this one a 100-foot service aerial on a canopy cab-forward International CO-8190 chassis.

In 1966, following the annexation of the former Town of Riverside, the W.F.D. acquired its only quintuple combination – a 100-foot LaFrance aerial with 840 gpm pump on 1964 Mercury tilt-cab chassis.

In the early 1980s, Windsor purchased its last two conventional aerial ladder trucks – one from Pierre Thibault Ltd. in 1981 and a nearly identical aerial from rival Pierreville Fire Trucks in 1982. Both of these 100-foot service aerials with pre-piped waterways were built on Spartan canopy cab chassis. Both were painted lime-green instead of the usual fire engine red.

The “aerial revolution” that swept the North American fire service in the 1960s came to Windsor in 1971 with the purchase of the city’s first elevating platform. Instead of a conventional telescopic aerial adder, the revolutionary new Snorkel had a crew basket with powerful fixed monitor nozzle at the upper end of an 85’ articulating boom. Firefighters no longer had to climb or drag hose up an aerial ladder. The Snorkel provided increased safety and remarkable aerial mobility. Windsor purchased a second Hi-Ranger Snorkel in 1982.

In 1998, under the progressive leadership of Fire Chief David Fields, the Windsor Fire & Rescue Service purchased no fewer than five Sutphen Aerial Towers – three with 95-foot telescopic booms and two “mini-quints” with 70-foot booms. But that’s a story for another day.

In summary, then, over the past century the Windsor Fire Service has operated a total of 16 aerial devices, including nine aerial ladder trucks, two elevating platforms and five aerial tower quints. Not included in this count are the six non-aerial city service hook and ladder trucks purchased between 1915 and 1952, for a grand total of 22 ladder trucks of all types.

As this article was being written, the WFRS was contemplating the purchase of its first conventional straight-frame service aerial in many years. This aerial, with remote-control, power-operated ladder pipe, would augment the four aerial towers currently in service. Onward and upward!

Note- With the exception of the Sutphen towers, all of these ladder trucks have been profiled in earlier installments in this historical series.