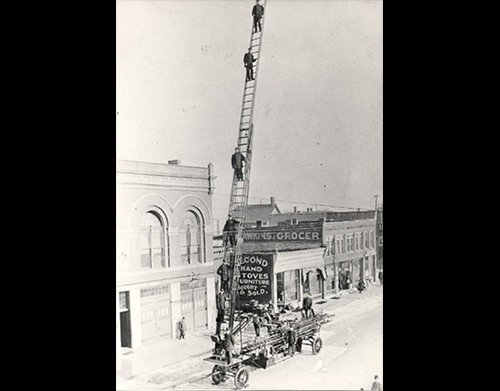 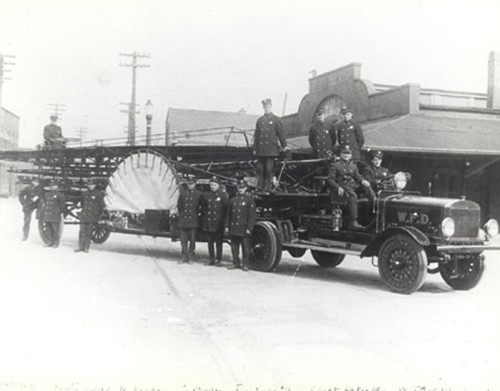 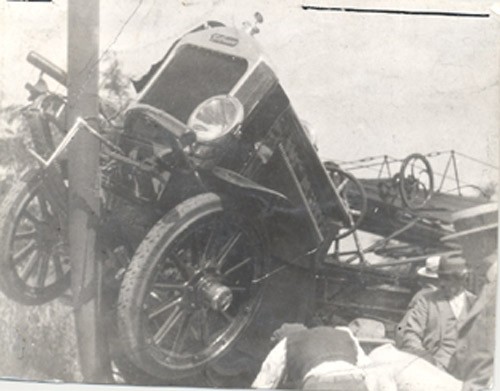 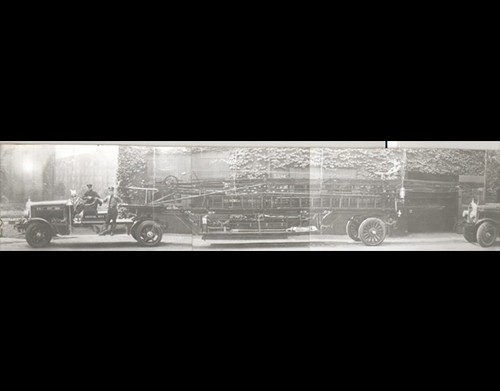 Over a period of seventy-two years, the Windsor Fire Department acquired a total of nine conventional aerial ladder trucks – seven purchased by the city and two inherited as the result of various municipal annexations.

In this and our next few articles, we will cover the histories of each of these impressive rigs. Our initial installment here will discuss the first two.

Purchased in 1910, Windsor’s first aerial ladder truck was a locally-made product – as was the second, inherited through annexation

In the early years of the 20th century, The Seagrave Company of Columbus, Ohio formed a new subsidiary company to manufacture horse-drawn – and later motor-driven — fire apparatus for the growing Canadian market. The W. E. Seagrave Fire Apparatus Company erected a two-story brick factory on Walker Road in what was then the Town of Walkerville in about 1905. Remarkably, the former W.E. Seagrave fire apparatus factory is still standing today, more than a century later – but that’s another story for another time!

Up to now, the Windsor Fire Department had only one ladder truck. Pulled by a team of two horses, Hook & Ladder Truck No. 1 was quartered in the city’s Fire Station No. 2 on Pitt Street East.

The W.F.D. ordered its very first Aerial Hook and Ladder Truck from the W. E. Seagrave Company in early 1910. This impressive apparatus – which was absolutely huge for its day – had a two-section, 85-foot trussed wood aerial ladder and tiller rear wheel steering. Beneath the main ladder lay a single bank of Seagrave’s patented trussed ground ladders — including a massive 55-foot Bangor ladder with “tormentor” poles.

The heavy aerial ladder was raised off its bed by two powerful coil springs housed in two long cylinders located just below the ladder’s pivot. Two burly firefighters spun big hand wheels at the ladder’s base to extend the fly ladder, and long, crowbar-like tools were used to manually rotate the aerial ladder turntable. Drawn by two big horses, the state-of-the-art aerial ladder truck was placed in service in the Pitt Street Hall – the only one of Windsor’s three fire stations big enough to house it – on September 29, 1910.

But the world was changing. The Ford Motor Company of Canada, which had been founded in a former wagon factory on Riverside Drive E. just six years earlier was thriving, and the company’s new Model “T” was already changing the world. A decision was made to replace the horses under the fire department’s relatively new aerial ladder truck – so it could keep up with the big, W.E. Seagrave motor pumper (Windsor’s first) which had been placed in service at the Pitt St. hall in 1914.

So it was that sometime in mid-1916, the front wheels of the 1910 W. E. Seagrave aerial were removed and a locally-built Menard four-wheel motor tractor was attached to the fifth wheel – putting two more fire horses out to pasture. The number “T W O” was spelled out in big brass letters on the Menard’s radiator core.

In the early 1920s, the six-cylinder W. E. Seagrave tractor was replaced with a Walkerville-built Gotfredson commercial truck tractor. Tragically, this tractor was wrecked when the big ladder truck was involved in a crash on Walker Road in 1927. The tillerman was hurled from his lofty perch at the rear of the machine and killed. A new 1927 Gotfredson tractor replaced the wrecked one.

In 1932, Walkerville’s 1927/1913 aerial was driven to the Seagrave Fire Engines Ltd. factory in St. Catharines, Ont. where a new spring-raised 85-foot Seagrave aerial ladder was installed. Three years later, Windsor annexed the surrounding towns of Walkerville, Sandwich and East Windsor. Walkerville’s Aerial No. 1, the 1927/1913 Gotfredson/Seagrave became Aerial No. 2A on the enlarged, integrated Windsor Fire Department, but continued to run out of the former Walkerville fire station on Walker Rd. at Richmond St.

Meanwhile, Windsor’s former Truck Two – renumbered Aerial No. 1A — was nearing the end of its service life. The truck’s aerial ladder had been damaged at the Windsor Ice & Coal Co. fire on July 4, 1935. Truck Two had fought its last fire. A replacement was needed — immediately. In April 1936, the 1916 Menard/1910 W.E. Seagrave aerial was replaced by a new American-LaFrance V-12 tractor-drawn 85-foot aerial – which will be profiled in our next installment. The Menard tractor was sold to a Mr. B. Jasperson in Kingsville. The trailer and ladder were broken up for scrap.

The former Walkerville aerial came to grief on a rainy night in November, 1949. While responding to an alarm on Drouillard Rd., something went wrong with the tiller steering gear and the tail end of the long hook and ladder bounced off a row of parked cars. The truck was towed back to the W.F.D. shops on Richmond St. Not long after, old Aerial No. 2A was hauled to the Kovinsky junkyard and broken up for scrap.

It looked like the days of iron firemen and wooden aerial ladders was, in Windsor, over. But not quite.