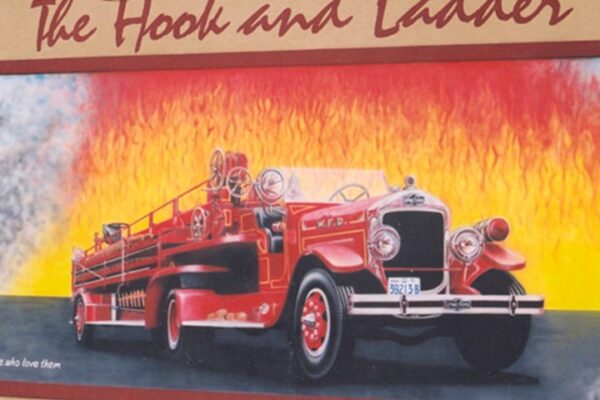 Aerial No. 1A as immortalized on mural at the Hook 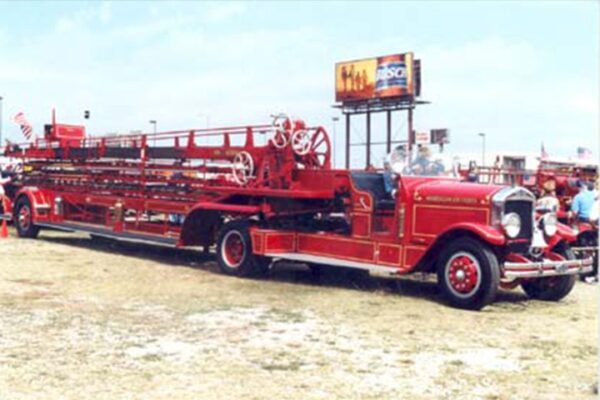 Windsor’s former Aerial No. 1A as it looks today with original 1936 tractor attached to ex-Ann Arbor 75’ aerial trailer. Photo taken by Ron Heal at an antique fire apparatus muster in St. Louis, Mo. in 2003 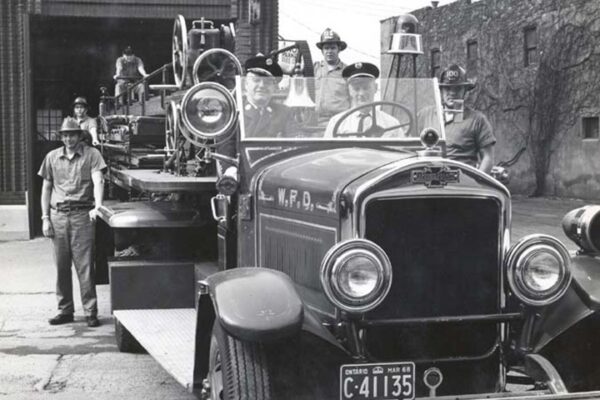 Aerial No. 1A photographed at former W.F.D. Headquarters on Pitt St. E. a few months before its retirement in 1967. That’s Chief Harold Coxon in the officer’s seat 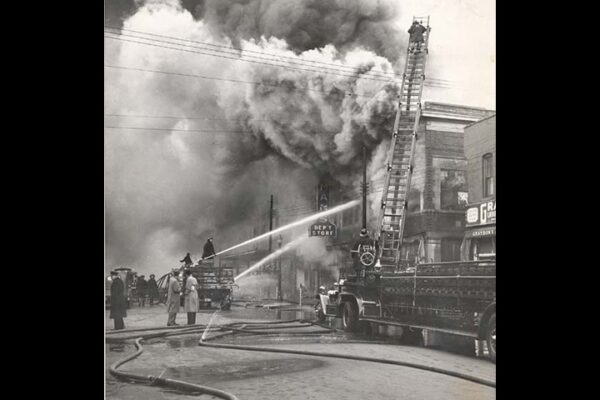 Aerial No. 1A, right, in action at Adelman’s clothing store fire on Chatham St. East on December 14, 1948 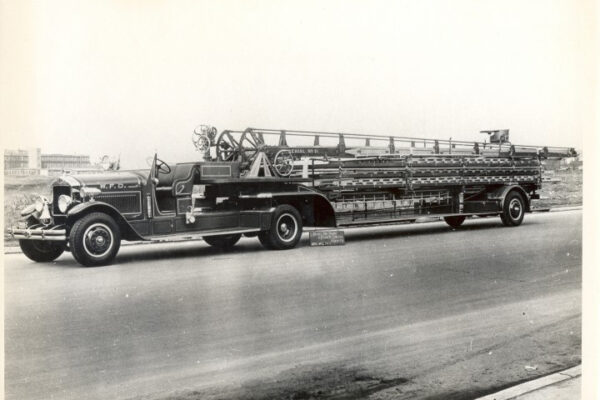 Aerial No. 1A, right, in action at Adelman’s clothing store fire on Chatham St. East on December 14, 1948

By the mid-1930s – twenty-five years after it had been delivered – Windsor’s first aerial ladder truck was clearly showing its age. Built in 1910, the W. E. Seagrave 85-foot spring-raised aerial was originally pulled by a team of horses. In 1916 the front wheels were removed and the horses were replaced by a locally-made Menard four-wheel motor tractor.

On July 4, 1935 – just four days after Windsor annexed the surrounding towns of Walkerville, Sandwich and East Windsor – Aerial No. 1A’s wooden aerial adder was damaged while fighting the Windsor Ice and Coal Company fire. With no reserve aerial on the Windsor Fire Department roster, a replacement was needed — immediately.

Tenders were duly called, and on December 30, 1935 an order was placed with LaFrance Fire Engine & Foamite Ltd. of Toronto for a brand-new 85-foot double-bank tractor-trailer aerial ladder truck. The contract price was a staggering – for the time – $17,900.

Resplendent in its rich deep vermilion paint with lavish gold-leaf trim, the new American-LaFrance Type 92-TA tractor-drawn aerial bearing factory serial number L-747 was delivered to Windsor on April 14, 1936. The awesome new aerial was absolutely the last word in modern firefighting technology. Under its high, rounded hood throbbed a 240-horsepower V-12 engine. The two-section, 85-foot wood aerial ladder was equipped with an American Automatic quick-raising hoist. By simply depressing a foot pedal on the turntable, two powerful coil springs smoothly lifted the big ladder out of its bed and into the air. Firefighters spinning big handwheels could quickly extend the fly ladder and rotate the turntable. The long trailer with tiller rear steering held two stacks of Douglas Fir trussed ground ladders ranging in length from 12 to 55 feet.

What’s more, the versatile new aerial could also be used as a Water Tower. A length of three-inch hose run up the underside of the bed ladder to a Morse Invincible nozzle at its tip. Three 2-1/2-inch hoselines fed the ladder pipe which could be remotely controlled by hand lines from the ground. A 12-inch bell was mounted on the front bumper ahead of the radiator and a big coaster siren on the left front fender cleared the way through traffic.

The queen of the W.F.D. fleet, the shiny new aerial ladder truck was placed into service at the Windsor Fire Department headquarters station at 254 Pitt St. E. For the next 13 years, the big LaFrance saw action at every major fire in the downtown area – including the Kresge store fire on Christmas night 1945, and the Adelman’s Department Store blaze on Chatham St. E. three years later.

In 1949, the 1936 American-LaFrance aerial was displaced at W.F.D. Headquarters station by a shiny new Pirsch 100-foot tractor-trailer hydro-mechanical aerial. Aerial No. 1A was reassigned to Station No. 2 on Richmond St. at Walker Road, where it answered alarms for the next 17 years. There, a pair of goggles hung from the tiller seat to protect the tillerman’s eyes while guiding the rear end of the big ladder truck through some of the leafy, tree-lined streets in the stately old Walkerville neighborhood.

In an ironic repeat of history, the tip of Aerial No. 1A’s ladder was damaged while fighting a multiple-alarm fire in a commercial building on University Avenue West on May 2, 1966. Chief of Apparatus Mike Koehl was reluctant to let the men climb the creaky old wood ladder. From now on the aerial would be used as a water tower only. And – just as in1935, – a replacement was urgently needed.

So it was that a new LaFrance 100’-foot service aerial on International CO-8190 canopy cab chassis was delivered in October, 1967. Lettered Ladder No. 1A, the new aerial was placed in service at headquarters. Truck No. 2A, the 1949 Pirsch 100-foot tractor-trailer aerial, was moved to Station 2 on Walker Rd to replace the 31-year old LaFance aerial, which was immediately retired from service.

The following month, the `36 LaFrance was sold to Walter Johnson of Windsor, who used it as a novelty and advertising vehicle for several years. After Mr. Johnson lost his storage space, the big ladder truck was parked in the grass under a lean-to shed at Walker Farms. Within weeks, the truck had been heavily vandalized. Its headlight and gauges smashed and It’s peeling wood ladders scattered about in the grass.

Sometime in the early 1970s, noted fire apparatus restorer Kenneth Soderbeck of Jackson, Michigan sought out the remains of the old truck. The trailer had been hauled off to a junkyard and cut up for scrap. The tractor – its big V-12 engine intact – had been sold to a Leamington man who planned to make a hot rod out of it. Ken bought the tractor and hauled it home to Jackson. A few years later the ex-Windsor tractor was mated with an ex-Ann Arbor (Michigan) 1938 American-LaFrance 75-foot single bank aerial ladder trailer. The hybrid aerial was eventually purchased by a fire truck buff in Kettering, Ohio.

Gone, but not forgotten, Aerial No. 1A has been memorialized in the big mural painted on the east wall of the Hook And Ladder Club on Seminole St. The mural image was taken from a photo the author took of the LaFrance in 1962, when it was still in front-line service at Station 2.

On yet another personal note, the writer had the honor of tillering Aerial 1A (with the assistance of the late Jim Meyers of the Apparatus Shops staff) out of service on that rainy Saturday morning in November 1967 when the `36 LaFrance ladder truck was delivered to its new owner.