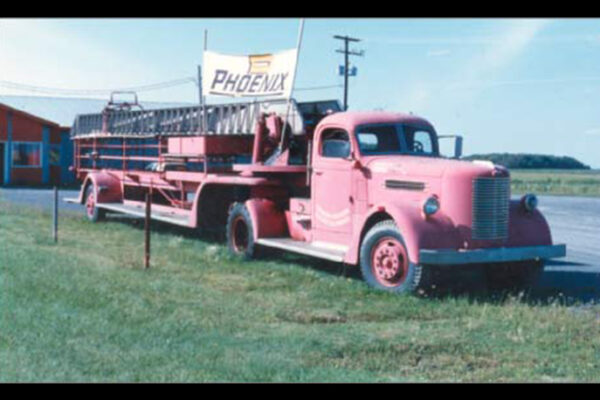 Faded and stripped of equipment, the old Pirsch ended its days as a billboard for Phoenix Fire Apparatus in Drummondville, Quebec 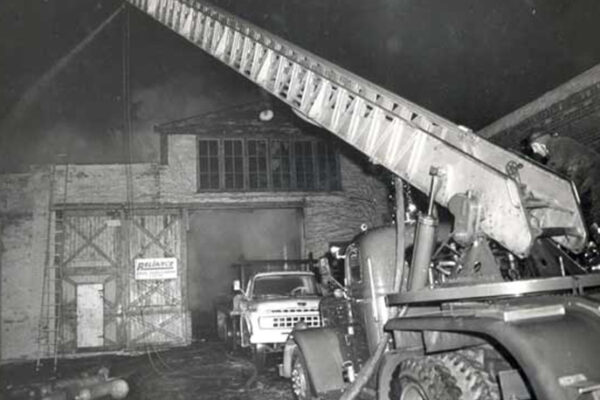 Truck No. 2A in action at the Kohen Box Company fire on University Avenue W. on March 11, 1967 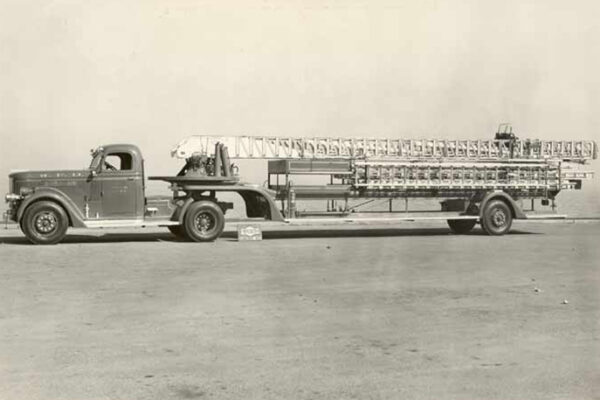 Factory-fresh Truck No. 2A poses for its maiden portrait on the shores of Lake Michigan in Kenosha, Wisconsin a few days before it was driven to Windsor 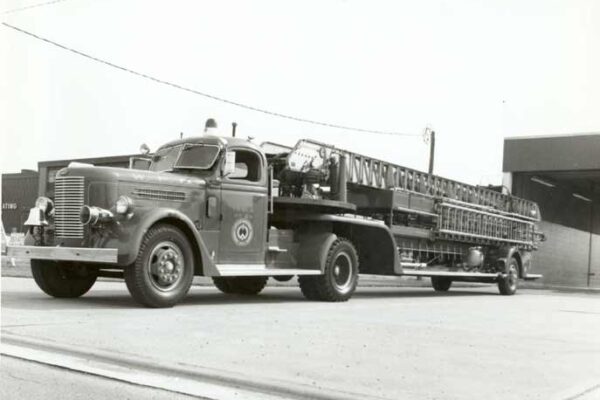 The Second World War was finally over, and Windsor was again basking in peacetime prosperity. Because it had been an important centre for war production, with several major auto plants and other vital defense industries, Windsor had expanded considerably during the war years. And so had the city’s need for improved fire protection.

On October 28, 1945, Fire Chief Clarence DeFields signed a purchase order for a new aerial ladder truck – the city’s first in a decade. Ordinarily, this order would have been placed with one of Canada’s two major fire apparatus manufacturers – LaFrance Fire Engine & Foamite Ltd. of Toronto, or Bickle-Seagrave Ltd. in Woodstock. But for reasons lost to history, the City of Windsor ordered its first modern 100-foot, hydraulically-operated metal aerial ladder truck from an American firm – the Peter Pirsch & Sons Co. of Kenosha, Wisconsin.

Because of a huge backlog of orders faced by all U.S. and Canadian fire apparatus manufacturers in the years immediately following the war, four years would pass before Windsor’s Pirsch aerial truck was completed and ready for delivery. In early April of 1949, the factory-fresh truck was photographed on the western shore of Lake Michigan a few blocks from the Pirsch factory a few days before the long delivery trip to Canada.

The 1949 Pirsch Model 41 Senior 100’ Tractor-Drawn Aerial Ladder Truck arrived in Windsor on April 7. Contract price was $22,000 but an additional $5,217 in customs duties and exchange boosted the delivered price to a whopping (for the time) $26,778. Following four days of extensive training, Truck No. 2A was placed in service at the Windsor Fire Department’s Headquarters Station at 254 Pitt St. E. on April 11. The 1936 American-LaFrance 85-foot spring-raised wood aerial the Pirsch displaced was transferred to Station No. 2 at Richmond St. and Walker Rd.

Powered by a Waukesha six-cylinder engine, the imposing Pirsch aerial had a three-man closed cab – and a windshield (with wipers) for the tillerman who sat in a bucket seat at the extreme rear of the long ladder truck. But the new truck’s most distinctive feature was its three-section, close-latticed 100-foot aluminum alloy aerial ladder – a Peter Pirsch & Sons hallmark.

The only one of its type ever delivered in Canada, the big Pirsch ran out of the Pitt Street station for 18 years before it was replaced by a new aerial truck in 1967.Nicknamed “The Big Stick”, the 1949 Pirsch responded with Engine No. 5 and Salvage No. 1 to all alarms in the downtown core area, including frequent runs to Hotel Dieu and Grace Hospitals. Between 1952 and 1964, two aerial trucks actually ran out of Station 1. The “Junior Aerial” (No. 3A) was a 75’ Bickle-Seagrave service aerial that answered all alarms outside the downtown area.

The big Pirsch fought many memorable downtown blazes, including an all-day fire that gutted the Baum & Brody furniture store on Chatham St. W. in August of 1957. Truck No. 2A also responded to the Metropolitan Store explosion that took ten lives and injured more than 100 on October 25, 1960. On a lighter note, the big tractor-trailer Pirsch aerial truck always rolled at the head of Windsor’s Labor Day parade with firefighter Tommy Dyson dressed as Popeye The Sailor waving to the crowds from his lofty perch in the tillerman’s seat.

When a new LaFrance/International 100’ service aerial was placed in service at the Pitt Street hall in November, 1967, the Pirsch was reassigned to Station 2 on Walker Road. In later years Truck No. 2A also saw service at the new Station 6 on Tecumseh Rd. E. and Station 3 on Edinburgh St. When Windsor’s first aerial platform was placed in service in 1971, the Pirsch became a spare ladder truck. Its aging ladder no longer safe to climb, Truck 2A was used for training before it was finally retired from service in 1978.

After nearly three decades in Windsor, the Pirsch aerial ladder truck was sold to Pierreville Fire Trucks and in early 1979 was driven to the company’s plant in Quebec. Still lettered “W.F.D.”, the truck was used briefly at the Quebec firefighters training school. Stripped of its ground ladders and faded to a dull pink, the Pirsch ignobly ended its days as a stationary billboard in front of the Phoenix Fire Apparatus Co. plant in Drummondville, Que. Sometime in the early 1990s the Pirsch was hauled off to a local junkyard and cut up for scrap.

As a footnote, only three Pirsch aerials were delivered to Canadian fire departments – all of them within a 50-mile radius of Windsor. Chatham purchased a 65’ Pirsch aerial on International cab-forward chassis in 1941, and in 1948 the Sarnia Fire Department got a 75’ Pirsch service aerial with open semi-cab. Both the Chatham and Sarnia Pirsches are still on the road today, occasionally participating in parades and antique fire apparatus musters.