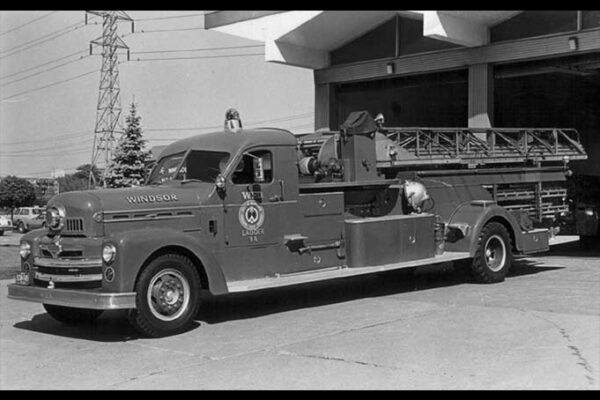 Aerial No. 3A was painted maroon – a much darker shade of red than on Windsor’s other fire apparatus 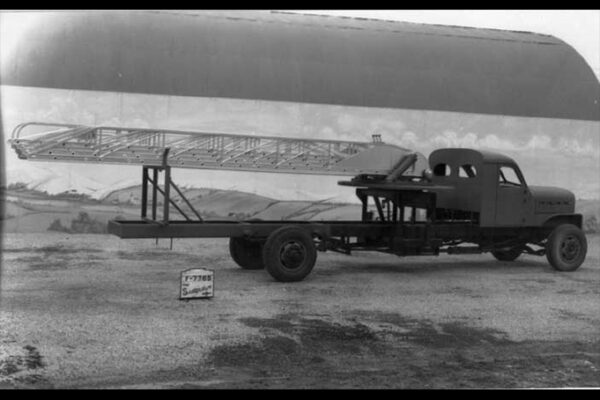 Bare chassis in primer at the Seagrave plant in Columbus, Ohio prior to shipment to Bickle-Seagrave Ltd. in Woodstock, Ontario 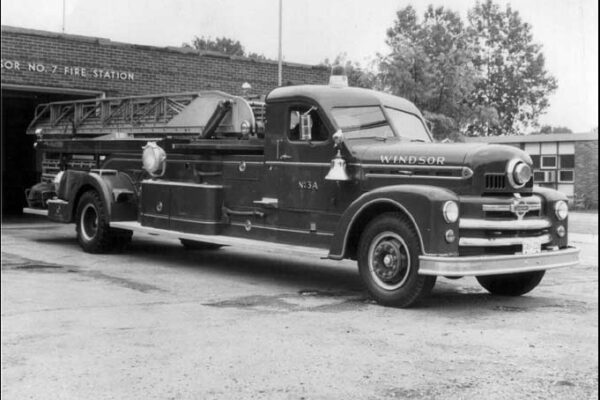 The Junior Aerial in action at the Bowman-Anthony Co. fire on Benjamin St., May 21, 1967

Windsor’s first service aerial ladder truck was purchased in 1952. Ordered as a replacement for a 32-year-old American-LaFrance city service hook and ladder truck, it was built by Bickle-Seagrave Ltd. of Woodstock, Ontario at a contract price of $40,990.

This aerial truck was actually built in two plants. The chassis, complete with three-man closed cab and 75-foot hydraulic aerial ladder assembly, was built in the Seagrave Corporation plant in Columbus, Ohio. Finished in grey primer but without fenders, ladder bed or cab glass, the bare chassis was shipped by rail to Bickle-Seagrave in Woodstock where it was completed and painted. Finished in a rich dark maroon and lettered “No. 3A” on its cab doors, the handsome new service aerial was delivered to Windsor on May 30, 1952. Aerial No. 3A was placed in service in Windsor Fire Department Headquarters the following day.

Powered by Seagrave’s “small” V-12 engine, the Model 400-A service aerial bore factory serial number F-7765 and had a compact, four-section 75-foot steel aerial ladder – one of very few of this configuration ever built by Seagrave in the United States or Canada. Most Seagrave 75-foot service aerials had three-section ladders. The new truck was of Seagrave’s bold new 70th Anniversary Series design, with the siren mounted in the truck’s nose above a wide two-bar chrome grille.

For reasons not completely clear today, two aerial ladder trucks ran out of the Pitt Street station in the 1950s. First-out was the Senior aerial – a 100-foot Peter Pirsch & Sons tractor-trailer aerial delivered in 1949. The smaller aerial was parked in the adjacent bay behind the shop-built 1940 Ford salvage squad — hence the nickname the Junior aerial designation. The “A” designated a ladder truck with an aerial ladder.

Aerial No. 3A responded to alarms out of the Pitt Street hall for the next 12 years, but in mid-1964 the 1952 Bickle-Seagrave was transferred to the new Station 4 on College Avenue just east of Huron Church Rd. — the first aerial ladder truck in the west end of the growing city. Following the annexation of Riverside by the City of Windsor in 1966, the Junior Aerial was moved to the former Riverside fire hall (redesignated Station 7) on Lauzon Rd. Riverside’s two-year-old 100-foot LaFrance/Mercury quint was quietly moved to Station 4 – raising howls of protest from former Riverside taxpayers.

In 1966, the Junior Aerial’s original V-12 engine was replaced by a big six-cylinder Waukesha engine taken out of a 1929 Bickle pumper that was being scrapped. This low-mileage motor had been installed in the old Bickle in 1953. In 1967 Windsor Body & Fender repainted the Junior aerial in a much brighter shade of red. At about this time the original Propello-Ray light on the cab roof was replaced by a more effective Federal Beacon-Ray.

Traded in to fire equipment dealer C. E. Hickey in May of 1982, the 1952 Bickle-Seagrave service aerial was sold to a fire apparatus collector near Toledo, Ohio later that same year. It was last seen at an Antique Fire Apparatus Muster in Greenfield Village in Dearborn, Michigan a year or two later.

During its three decades of service, Aerial No. 3A saw action at some of Windsor’s largest fires, including the Labelle Building all-nighter at Ouellette and University in February 1959 and the Metropolitan Store disaster in downtown Windsor the following year.