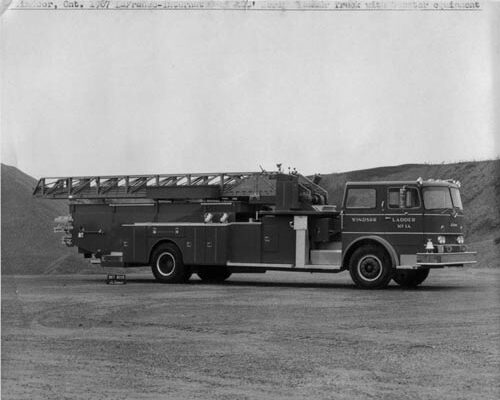 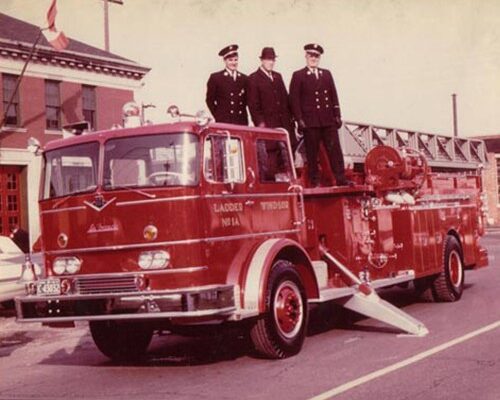 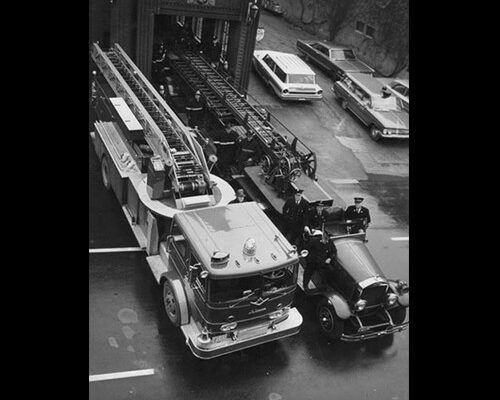 The LaFrance/Mercury Quint prepares to go into action at the Herald Press fire on Pitt St. W. in June, 1974 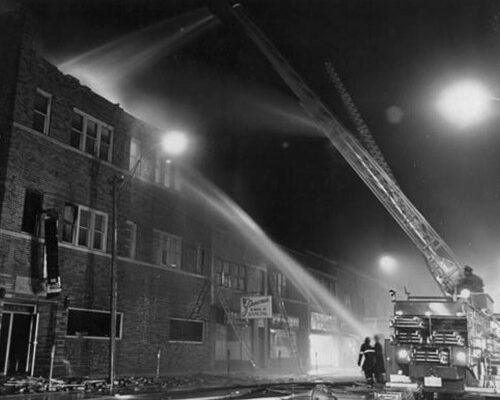 By the mid-1960s, Windsor’s aerial ladder fleet was beginning to show its age. Aerial No. 1A – a 1936 American-LaFrance – had been in service for nearly three decades. Truck No. 2A, a 1949 Pirsch, had been responding to alarms for 26 years, and Aerial No. 3A, the 1952 Bickle-Seagrave “Junior Aerial” had been around for 16 years.

So it was that in early 1966, Chief Harold Coxon and Chief of Apparatus Mike Koehl began drawing up specs for a new aerial ladder truck. Bids were duly solicited from the leading Canadian fire apparatus manufacturers and on October 18, 1966 a contract was awarded to LaFrance Fire Engine & Foamite Ltd. of Toronto for a 100-foot service aerial at a contract price of $52,000.

More than a year would pass before the new aerial truck was delivered. Lettered Ladder No. 1A, the cab-forward 100-foot service aerial arrived at the Windsor Fire Department shops on Richmond St. next to Station 2 on November 3, 1967.

The new ladder truck was of the straight-frame service aerial type. Instead of the premium LaFrance custom fire apparatus chassis, Ladder 1A was built on a long-wheelbase International CO-8190 semi-custom chassis with five-man closed canopy cab. Powered by a 275-horsepower International gasoline engine, Ladder No. 1A was Windsor’s first aerial with booster equipment, and also carried 250 feet of metal ground ladders. A pair of hydraulic outriggers stabilized the big truck when the four-section 100-foot steel aerial ladder was raised.

After extensive testing and training, the new aerial was placed in to service at the W.F.D. Headquarters Station at 254 Pitt Street East station on November 17, 1967. Ladder No. 1A displaced the 1949 Peter Pirsch 100-foot tractor-trailer aerial, which was transferred to Station 2 on Richmond St. at Walker Road. The former Aerial No. 1A, the 1936 American-LaFrance open-cab tractor-trailer aerial with spring-raised 85-foor ladder, was taken out of reserve service and retired. A few weeks later it was sold to a local citizen, Walter Johnson.

Opened in 1928, the Pitt Street station was closed in August, 1970. Engines 1 and 7 and Ladder No. 1A were moved to the new Headquarters Station 1 on Goyeau St. A little over a year later, in late 1971, the LaFrance/International service aerial was replaced at headquarters by Windsor’s first elevating platform, or aerial tower. Ladder No. 1A was transferred to Station 2.

In December, 1972, Ladder No. 1A was involved in a collision which damaged its 100-foot aerial ladder. The truck was taken out of service and driven to Montreal and Pierreville, Que. for repairs and placed back in service in early 1973.

In the late 1970s, Ladder No. 1A was repainted from its original red to the trendy new lime green.

After just 14 years on the W.F.D. apparatus roster, the LaFrance/International was traded in on a new 100’ aerial truck in 1981 and driven to the Pierre Thibault plant in Pierreville, Que., where it was reconditioned and sold to an unknown fire department in Quebec.

Although it served the city well, the 1967 LaFrance/International had the shortest service life of any aerial truck in Windsor Fire Department history.