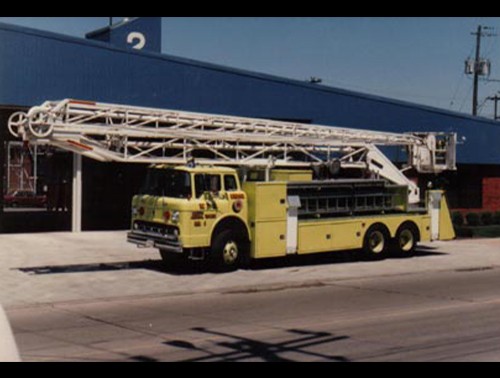 1971 Hi-Ranger As It Looked Late In Its Career 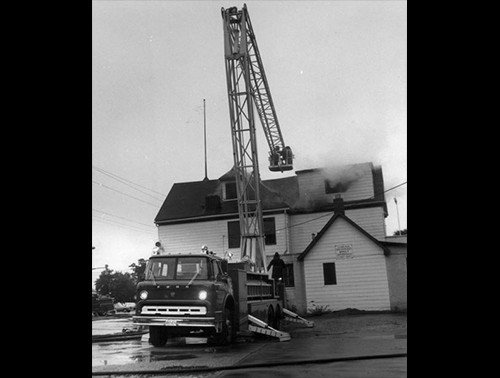 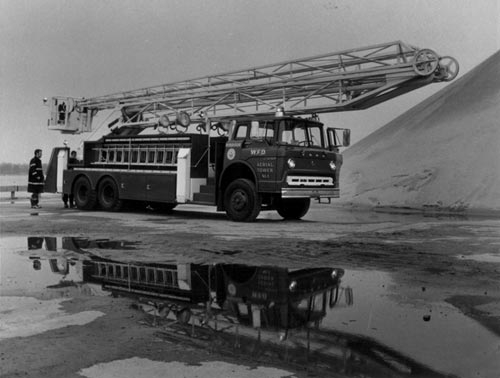 Aerial Tower No. 1 During Pre-Service Training at Ford Dock

Strolling back to his office after lunch one day in 1957, Chicago Fire Commissioner Robert J. Quinn paused to watch some city tree-trimmers at work in a city park. Quinn was amazed at the mobility the men in the bucket of their utility-type elevating platform had – the ease with which they could move up or down, around and over objects. Why, Quinn thought, couldn’t his firefighters have this same kind of aerial mobility?

Quinn shared his observations with other senior members of the Chicago Fire Department, who decided then and there to explore this novel concept. Thus it was that in 1958, the Windy City placed the first firefighting elevating platform – nicknamed Quinn’s Snorkel – into service, sparking an aerial revolution. Within a few years, the elevating platform, or Snorkel, virtually revolutionized aerial firefighting in the United States and Canada.

Fredericton, New Brunswick was the first fire department in Canada to place an elevating platform into service, in 1960. Within a few years, most major Canadian cities had added Snorkels to their firefighting fleets.

Windsor took delivery of its first elevating platform in 1971. Fire Chief Harold Coxon and Chief of Apparatus Melchior (Mike) Koehl had carefully studied all of the major types and makes of firefighting aerial platforms before recommending the purchase of one to Windsor City Council in the late 1960s.

Windsor’s first aerial tower arrived at the new Fire Department Headquarters station on Goyeau Street late on the afternoon of October 21, 1971. Ordered more than a year earlier, it was built by the Aerial Tower Sales Division of Duke Lawn Equipment Ltd. in Burlington, Ontario at a contract price of $73,525. Mounted on a tandem-axle Ford CT-900 chassis with three-man tilt cab, the 85-foot Hi-Ranger Snorkel was also Windsor’s first piece of Diesel-powered fire apparatus.

In addition to its two-section articulated boom of open-lattice construction, the aerial tower carried 240 feet of ground ladders. The roomy basket was equipped with a prepiped monitor nozzle, and a duplicate set of controls allowed the men in the basket to control movement of the tower. Two sets of “A” frame hydraulic outriggers stabilized the big truck when the white-painted boom was raised.

Unfortunately, however, this totally new kind of aerial apparatus was not warmly welcomed by all of Windsor’s firefighters, some of who shunned the strange-looking truck and refused to even look at it. “R.I.P. Snorky” read the card on a big basket of flowers someone scored from a nearby funeral home and placed on the tower’s rear step hours after it was backed into its stall for the first time.

But the skeptics were soon converted as the big machine demonstrated its incredible versatility as both a rescue vehicle and water tower in the weeks of intensive training that followed. Within no time, it seemed, nobody wanted to climb an aerial ladder anymore!

Lettered Aerial Tower No. 1 on its cab doors, the Snorkel was placed into service at Windsor Fire Department headquarters in late November, 1971. Six months were to pass before the aerial tower fought its first working fire in a row of stores on Wyandotte St. E. near Hall Avenue the following May. From this point on, Aerial Tower No. 1 was front and centre at nearly every major fire in the city.

After eleven years of service at the Goyeau Street hall, Aerial Tower No. 1 was replaced at headquarters by a second Hi-Ranger elevating platform delivered in the spring of 1982. Aerial Tower No. 1 was reassigned to Station 6 on Tecumseh Rd. E. In 1986 the 15-year-old tower was completely overhauled and repainted from its original red to lime-green to match most of the W.F.D.’s other pumpers and ladder trucks.

Running out of various Windsor halls, Aerial Tower No. 1 soldiered on for another dozen years before it reached the end of the line. The delivery of three Sutphen Aerial Towers and two Sutphen Mini-Tower Quints in 1998 effectively ended the aerial ladder era in Windsor. The two 85’ Hi-Ranger Snorkels and two100-foot midship-mount service aerials purchased in the early 1980s were declared surplus and retired.

Twenty-seven years after it was delivered that bright October afternoon, Aerial Tower No. 1 was stripped of its equipment and sold to an individual in the Windsor area. It hasn’t been seen since.