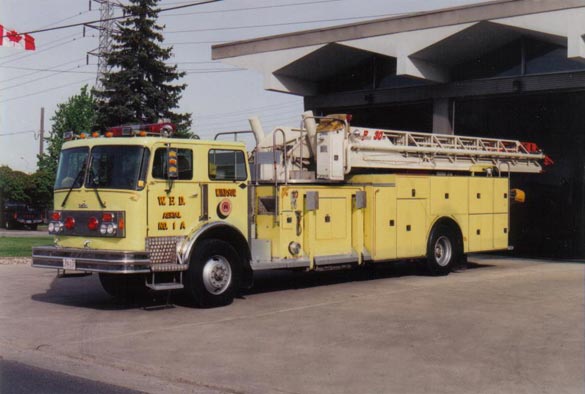 Aerial No. 1A – the 1982 Pierreville-Spartan with retrofitted piped waterway 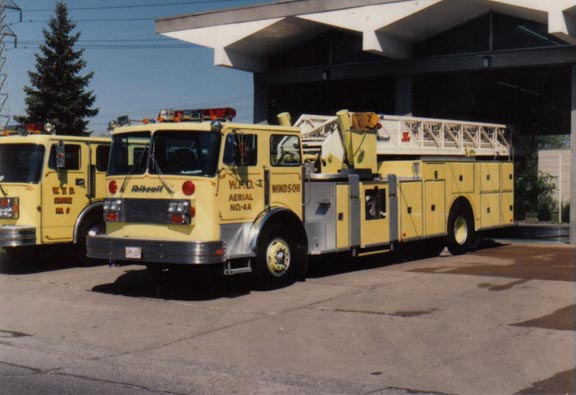 By the late 1970s, the years were again catching up to Windsor’s hard-working aerial ladder fleet. More than a decade had passed since the Windsor Fire Department had purchased its last new aerial ladder truck – a LaFrance 100’ service aerial on semi-custom International chassis delivered in 1967. The W.F.D.’s “junior” aerial – a 1952 Bickle-Seagrave 75-footer – had been in service for nearly two decades and was due for replacement.

In 1980, Fire Chief Ken Stewart and Chief of Apparatus Mike Koehl drew up specifications for two 100-foot midship-mounted service aerials. While both were ordered from prominent Canadian fire apparatus manufacturers located in the same small town in Quebec, the ladder trucks were built by two totally separate companies.

The first one was built by Pierre Thibault Ltd. Although the company traced its roots all the way back to 1918, Pierre Thibault set up shop in Pierreville, Quebec, near Sorel, in the 1930s. Following the demise of Bickle-Seagrave Ltd. in 1955 and LaFrance in the early 1970s, Thibault emerged as Canada’s largest fire apparatus builder.

In November 1980 the writer accompanied Chief Koehl and Chief Stewart to the Pierre Thibault factory in Quebec for an in-progress inspection of the new aerial truck which was taking shape on the shop floor. Still in primer, most of the aerial’s rear bodywork had not yet been installed, so mechanical components – the engine, turntable mechanism, hoist and hydraulic system – could be readily accessed and inspected for contract compliance.

Lettered Aerial No. 4A on its cab doors, the first of these two new aerials was delivered to Windsor in the early spring of 1981. After the requisite testing and crew training, the handsome new aerial truck was placed in service at Fire Station No. 4 on College Avenue near Huron Church Rd.

A virtual clone of the 1981 delivery, the second new aerial arrived in Windsor in mid-1982. Lettered Aerial No. 1A, this aerial was built by Thibault’s archrival, Pierreville Fire Trucks. Following a bitter feud within the Thibault family following the death of patriarch Pierre Thibault, five of his sons left the family firm and set up their own fire apparatus company – Pierreville Fire Trucks – in a new factory in St. Francois-du-Lac, just across the river from Pierreville.

Painted lime-green with gold-leaf striping and lettering, the two Diesel-powered ladder trucks were virtually identical in appearance. About the only way to tell the two trucks apart were the two big, round red lights on the front of the Thibault’s cab. Both were built on Spartan custom cab-forward chassis with five-man canopy cabs. Each had a midship-mounted, white-painted four-section 100-foot steel aerial ladder. Dual sets of hydraulic outriggers stabilized the apparatus when the main ladder was raised. Ladder beds were fully enclosed, behind large equipment compartments on both sides of the apparatus.

Following several weeks of training, Aerial No. 1A was placed in service at Station 2 on Richmond St. at Walker Road.

Years later, for reasons that now elude us, the numbers on the cab doors of these two aerials were switched. Former Aerial No. 4A became Aerial No. 1A, and Aerial 1 became Aerial 4. Go figure.
Following an accident, the 1982 Pierreville/Spartan aerial was sent back to Pierreville for repairs and while there was retrofitted with a pre-piped waterway with fixed, remote control ladder pipe.

Through the 1980s and well into the 1990s, Windsor’s aerial apparatus included the two 100-foot service aerials and two elevating platforms, or Snorkels. The eighth and ninth aerial ladder trucks purchased by the W.F.D. since 1910, the 1981 and 1982 Spartans went into reserve when the Windsor Fire & Rescue Service took delivery of five Sutphen Aerial Tower quints in 1998. Within a few years both of the conventional aerials were retired and sold. At least one of them is believed to still be in service on a fire department in Quebec.

The “Quebec Twins” had served the citizens of Windsor well for nearly 20 years.