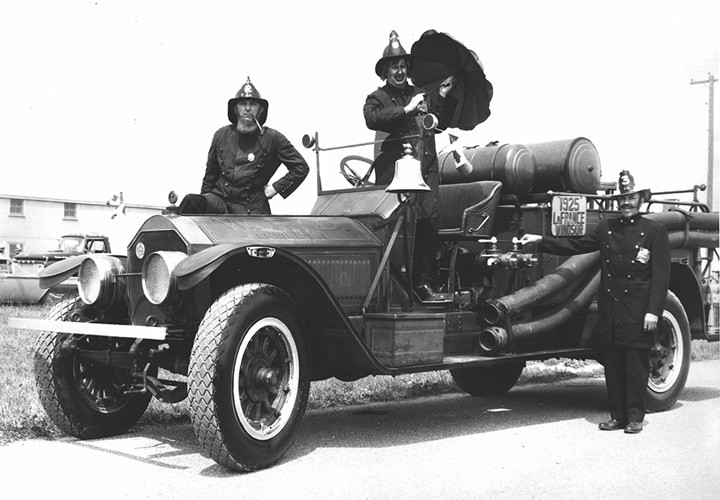 In 1967 – in preparation for the mammoth parade planned to mark Canada’s 100 th birthday – three members of the Windsor Fire Department decided to form their own Clown Troupe.

Jim Meyers was a mechanic at the fire department’s Apparatus Division, which maintained the W.F.D.’s vehicles ranging from chief’s cars and pickup trucks to big pumpers, rescue squads  and aerial ladder trucks. John Rogers and Mark Learmonth toiled in the W.F.D. Signals Division, which maintained the city’s fire alarm system. Both of these vital support functions were housed in the Windsor Fire Department Shops complex in the former Walkerville Public Market building on Richmond St., next door to Fire Station No. 2.

After months of rehearsals and deciding on outrageous costumes and face paint, the fledgling troupe was ready to perform. Their big debut came on Canada’s Centennial day, July 1, 1967. The parade which rolled down Ouellette Avenue that memorable day was the largest the city had seen since its very own centennial parade in 1954. The three novice clowns rode on the back step of a former Windsor Fire Department 1925 American-LaFrance pumper, which the city had donated to the Historical Vehicle Society of Windsor in 1959. Hopping on and off the rear step, the highly-animated trio delighted young and old alike all along the crowded parade route with their crazy antics.  Following the July 1st parade, the Windsor Fire Department clowns performed in a number of other centennial parades that year – including the Detroit Fire Department’s centennial parade in October. Meyers, Learmonth and Rogers continued to entertain at Windsor Fire Department and other public events until their retirement. All are since deceased.

Over the years, Windsor Fire Department members dressed up as clowns from time to time – volunteer entertainers who performed in parades. Among the most memorable of these was the late Tommy Dyson who for many years, dressed as Popeye – complete with corncob pipe – waved to cheering crowds from the tiller seat of Aerial No. 2 in Windsor’s annual Labor Day Parade.