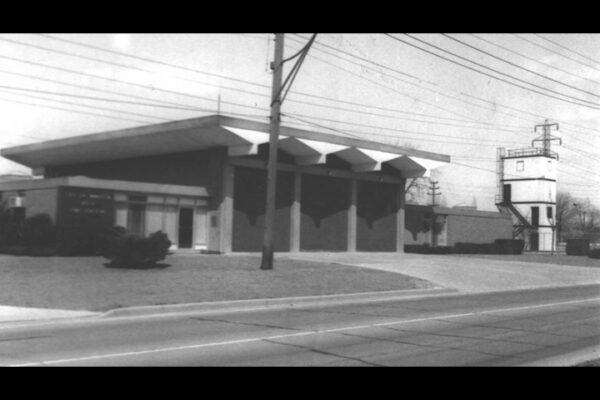 Over the past three-quarters of a century, the Windsor Fire Department has had just two fire stations that bore the number 4.As the second decade of the new century unfolded, Windsor began the motorization of its fire department. The Windsor Fire Department acquired its first motorized fire engine – a big W. E. Seagrave automobile pumper built by the W.E. Seagrave Fire Apparatus Co. in neighboring Walkerville, in 1914. The following year the W.F.D. acquired two locally-built Menard combination hose and chemical cars. To house the speedy new motor hose combinations , two new fire stations were erected, one on each side of the city.

The first of these new fire halls was built on the city’s west side, on Wellington St. just north of Wyandotte St. E. A second, identical single-bay, bungalow style fire station was opened the following year at 744 Langlois Ave. on the east side of the city. The Wellington St. hall was designated Station No. 1. The new station on Langlois Ave. was numbered Station No. 3. The Fire Department Headquarters hall on Pitt St. in the downtown core area was Station No. 2.

The Windsor Fire Department underwent a major transformation when the City of Windsor annexed the former towns of Walkerville, Sandwich and East Windsor on July 1, 1935. The three smaller fire departments, their men and apparatus were absorbed into a much-enlarged Windsor Fire Department.2 Under this reorganization, the former Fire Station No. 3 on Langlois Ave. became Station No. 4 on the enlarged W.F.D. The city’s first Engine No. 4 was a chain-drive 1923 American-LaFrance rotary gear pumper. After only a few years, however, Station 4 was closed. The former Langlois Ave. fire hall was later converted into a private residence.

For many years there was no Fire Station No. 4 in Windsor. This number gap was finally closed in July 1964 when an impressive new three-bay fire hall was opened at 2600 College Ave. just east of Huron Church Rd. to better protect the west side of the city. The former Station 6 on Sandwich St. was closed and its apparatus was moved to the new College Ave. hall.

The single-story station was the city’s first with “drive-through” truck bays. Fire apparatus returning from a call could drive directly into their stalls through large rear doors. It was no longer necessary to block traffic while the rigs were backed into the hall. A training complex with drill tower was later built immediately east of the hall. Station 4 housed a pumper and the first aerial ladder truck ever on the west side of the city. Prior to the opening of Station 4, Windsor had just one rescue squad truck, which covered the entire city out of the headquarters hall on Pitt St. In 1967 a new Chevrolet heavy rescue squad was placed in service at Station 4 to cover the west side. The other rescue squad, a 1957 Fargo, was relocated from Station 1 to Station 2 on Richmond St. to cover the east side.

Located across the street from the busy University of Windsor athletic complex, Station 4 houses a 1050 gpm pumper and a Sutphen 95’ aerial tower. With its distinctive cantilever roof and three big red doors, Fire Station 4 has served Windsor’s west end for nearly half a century.