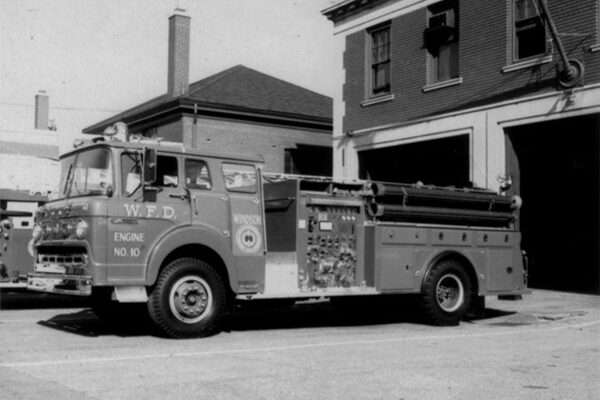 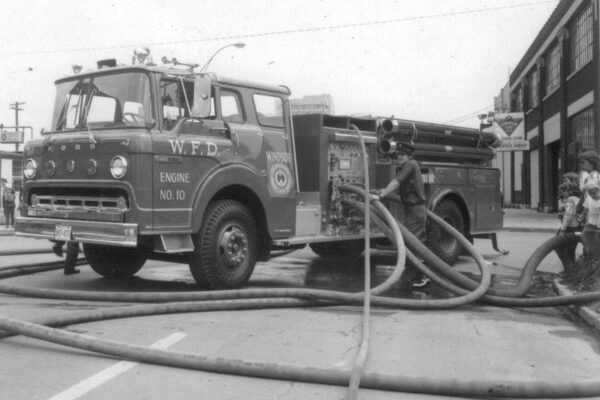 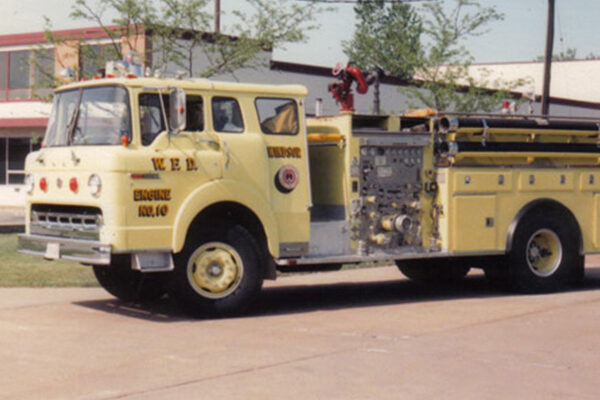 In 1957, the Ford Motor Company introduced a new line of medium/heavy-duty trucks called the “C” Series. The new C-Series Ford’s rectangular, flat-faced cab tilted forward for unhindered access to the engine. Designed primarily for the city delivery market, the C-Series Ford proved very popular as a municipal service vehicle – for refuse trucks, cherry-pickers and various other municipal duties — including firefighting.With its huge windshield, compact bumper-to-back-of-cab dimensions and wide range of GVW, wheelbases, axle and engine choices, the Ford “C” became the commercial chassis of choice for North Amercan fire departments. Over the next 33 years, before the last one rolled off Ford’s heavy truck assembly line in 1990, thousands of Ford C-Series fire trucks ranging from small rural pumpers and tasnkers on up to big aerial ladder trucks and elevating platforms were delivered to fire departments across the U.S. and Canada. The Windsor Fire Department ultimately acquired no fewer than eleven Ford C-Series rigs, including six pumpers, two aerial towers, two heavy rescue squads and one quintuple combination aerial ladder truck, or “quint”.

The W.F.D.’s first Ford “C” was an 85’ elevating platform – the department’s first Diesel-powered fire apparatus – delivered in 1971. The next was a 1,050 gpm pumper ordered in late March, 1972 from Pierreville fire Trucks in Pierreville, Quebec at a contract price was $36,500 – less a $1,500 allowance on an ex-Sandwich West Township 1953 Bickle-Seagrave/Chevrolet pumper traded in. The C-900 pumper with extended canopy style cab was powered by a Detroit Diesel 6V-71N engine teamed with a Waterous CMBX pump with electric primer, and a 327-gallon water (booster) tank.

Lettered Engine No. 10, the new pumper was delivered to Windsor on January 20, 1973 – two days after it had passed its Underwriters pump test at the Pierreville plant. After its acceptance test at the Ford dock on January 25 and several weeks of crew training, the new Engine No. 10 was placed into service at Station 1 on Goyeau St. on February 19, 1973. With the delivery of another Ford C-Series pumper three years later, Engine #10 was transferred to Station 2 on Walker Rd. where it ran for many years. In 1983, Engine 10 was repainted from its original red to lime-yellow. Engine 10 later saw service at Station 3, before being placed into reserve service as a spare pumper. It was in this role, as a spare, that Engine 10 was running out of Station 4 on College St. when it met its untimely end on a summer afternoon in 1989.

Responding to an alarm during a heavy rainstorm, Engine 10 skidded off Sunset Ave. at a curve in the road near the Ambassador Bridge and slammed into a tree. Several crew members were injured – none seriously – but the 17-year-old pumper was a write-off. With heavy damage to the cab, the wrecked engine was towed to the W.F.D. shops on Kew St. where it was later cut up for scrap. The pump was kept for training purposes, but the bare chassis sat in the shop year for some time before bit too was hauled off to the junkyard.

Following is a list of Windsor’s Ford “C” Series rigs: