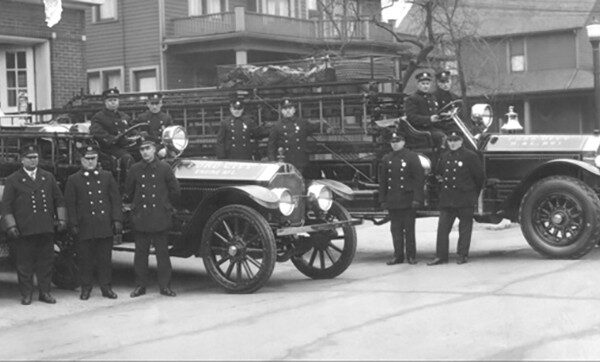 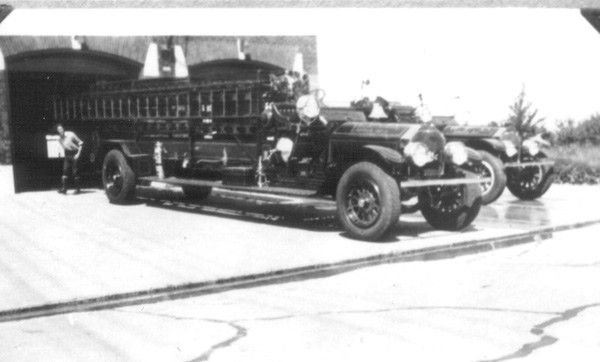 In the late summer of 1904 a bold, new industrial enterprise set up shop in the former Walkerville Wagon Works factory on Riverside Drive East near Drouillard Rd. The fledgling Ford Motor Company of Canada built just 117 cars in its first year. But with the launch of the legendary Model “T” a few years later, Ford was well on its way to becoming one of the world’s largest and most successful automobile manufacturers.

During the `teens and 1920s, Ford of Canada erected two huge vehicle assembly and components manufacturing plants to the southeast of its original factory site.. With thousands of well-paid Ford workers living in the area, a new community – Ford City – soon sprang up. Mail addressed to Ford of Canada from around the world was often simply addressed to “Ford, Ontario”.

Built in 1921, the two-bay, single story East Windsor Fire Hall was located on the east side of Drouillard Road just south of Riverside Drive, behind Our Lady of the Rosary Catholic Church. At the time of amalgamation, the largely volunteer East Windsor Fire Department had two pieces of motor fire apparatus – an American-LaFrance 800 gallon-per-minute Type 75 rotary gear pumper purchased in 1922 and a 1924 American-LaFrance Type 14 city service hook and ladder truck, as well as a 1920 Model “T” Ford Chief’s Roadster. The former East Windsor hall was closed. The pumper became Windsor’s Engine No. 3 and the ladder truck relettered as Ladder No. 3. Both of the ex-East Windsor rigs were assigned to Windsor’s new Station 3 — the former Walkerville Station 2 on Turner Rd. near Tecumseh Rd. E. In the late 1930s both trucks were retrofitted with shop-built windshields and the pumper’s original hard rubber tires replaced with pneumatics.

In May of 1950 the 1922 American-LaFrance pumper was traded in to Bickle-Seagrave Ltd. of Woodstock, Ontario for an allowance on a new canopy cab pumper. Two years later the 1924 LaFrance ladder truck was replaced by a new 1952 Dodge city service ladder truck built in the Windsor Fire Department shops.
Stripped of its ladder racks, the old ladder truck was sold to Emancipation Day promoter Walter Perry, who planned to use it as a float for the annual Miss Sepia beauty contest. After sitting in the weeds in a backyard on Mercer St. for several years, it was eventually hauled off to the scrapyard ca. 1956.

Amazingly, some 78 years after it was delivered to East Windsor, the 1922 LaFrance pumper is still on the road today, proudly maintained as a parade piece by a small fire department in Seeley’s Bay, Ontario near Kingston