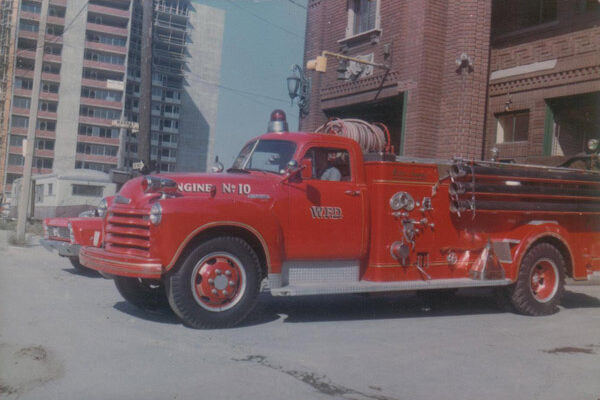 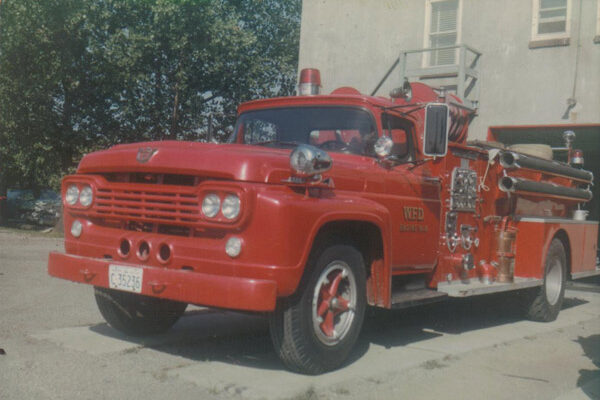 As noted in an earlier article, following the January 1, 1966 annexation of the former Town of Riverside and a portion of Sandwich West Township, the Windsor Fire Department acquired six pieces of fire apparatus from the two suburban fire departments.

The three former Riverside rigs, two pumpers and an aerial, were covered in an earlier installment in this series. While Windsor acquired all three of Riverside’s rigs, just three of Sandwich West’s apparatus (as well as the former Sandwich West Fire Hall on Third Concession Rd.) were added to the Windsor Fire Department roster. We profiled one of these, a Mercury rescue unit with locally-made Welles Corp. van body, in an earlier piece – Windsor’s Other Rescue Squad.

The other two Sandwich West rigs were a pair of commercial-chassis pumpers – a 1960 King-Seagrave 625 gpm pumper on Ford chassis, and a 1953 Bickle-Seagrave/Chevrolet 420 gpm pumper.

Relettered as Windsor’s Engine No. 8, the 1960 Ford remained in the former Sandwich West hall on Third concession. The 1953 Chevrolet was relettered Engine No. 10 and assigned to W.F.D. Headquarters on Pitt St. E. Following the opening of the new headquarters hall on Goyeau St. in 1970, the `53 Ford was moved to this hall. In its later years Engine 10 was used as a foam carrier, its hose bed stocked with cans of foam for use at fuel fires.When a new Engine 10 was delivered in early 1973 the 20-year-old Chevrolet pumper was traded in to Pierreville Fire Trucks Ltd. of Pierreville, Que. For an allowance of $1,500.When Windsor’s new Station 5 on Cabana Road was opened in the early 1970s, the Third Concession hall was closed and the 1960 Ford moved to the new hall. Engine 8 was replaced by one of four new Pierreville/Ford Diesel pumpers delivered in the summer of 1977. The 1960 King-Seagrave/Ford was retired and sold to Pierrevillle Fire Trucks, along with a 1949 Pirsch 100-foot aerial, the following year.