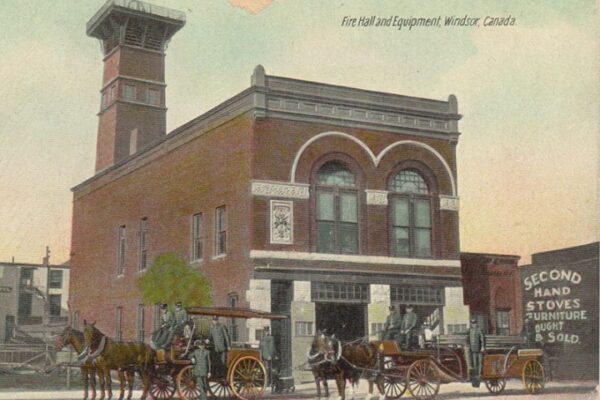 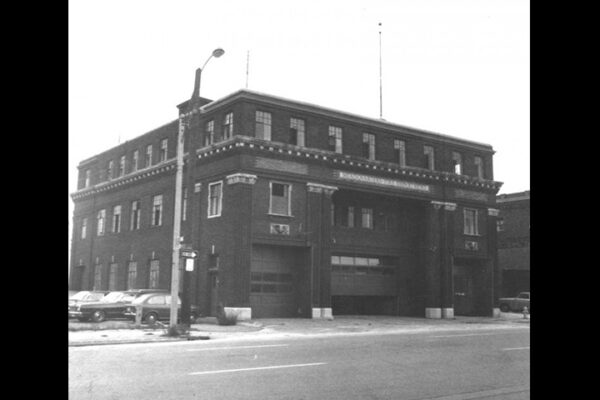 Over the past 125 years, the Windsor Fire Department – now Windsor Fire & Rescue Services — has occupied just three headquarters fire stations in its long and history. Housing the department’s administrative and fire alarm communications functions as well as front-line firefighting apparatus and their on-duty crews, the headquarters fire hall serves as the nerve centre and “head office” of the fire department.

Windsor’s first Headquarters Fire Station was erected on the north side of Pitt Street East between Windsor Ave. and Mercer Streets in 1887. Opened in 1888, the handsome two-story fire hall had two apparatus bays, stalls for four fire horses and a lofty hose-drying tower at the rear. At the turn of the 20th century, the station housed a horse-drawn combination hose and chemical wagon and a hook and ladder truck with tiller rear steering. At this time the W.F.D. had also had two “satellite” fire stations — one on London St. W. near Bruce Ave. and the other at Aylmer and Sandwich Streets.

When the Windsor Fire Department began to motorize its firefighting fleet in 1914-1915, the fire halls designed and built for horse-drawn equipment proved less than adequate. Windsor’s first motorized fire engine, a big W.E. Seagrave Model WC-96 combination pump and hose car, went into service in the Pitt Street station in 1914. The following year two Menard motor hose combinations were placed into service at the east and west side fire halls. Windsor’s last fire horses were retired on Christmas Day, 1916.

In 1927, construction of a new Headquarters Fire Station began next door to the old hall. Opened in 1928, the new headquarters fire station had the massive permanent appearance of a bank building. The imposing three-story brick building had four apparatus bays. The W.F.D.’s administrative offices and fire alarm office occupied the front portion of the second floor overlooking Pitt St., across the street from the City Market. There was a large gymnasium on the third floor. Two sets of brass sliding poles connected the second and third floors to the apparatus floor.

The tile and terrazzo main floor housed an impressive array of apparatus, including two pumpers, an aerial ladder truck, a city service ladder truck and Fire Chief Clarence DeField’s bright red Studebaker coupe. The west bay served as the department workshop, where apparatus was serviced and repaired. In the 1930s, Windsor’s first rescue squad rig and the “service” car – a special equipment/manpower unit that responded to all box alarms all over the city – joined the pumpers and ladder trucks on the crowded main floor.

Interestingly, the downtown headquarters fire hall at 254 Pitt St. E. was designated the W.F.D.’s Station No. 2. It wasn’t until the annexation of Walkerville, Sandwich and East Windsor in 1935 that the Pitt St. hall was renumbered Station 1 in the enlarged department, which doubled in size with six stations instead of the former three.

In the 1950s the Pitt Street station – known as “The Big House” housed two pumpers (Engines 5 and 7), a 100-foot aerial ladder truck (Truck 2A) , a 75-foot “junior” aerial (Truck 3A) and Salvage No. 1, the former service car nicknamed The Bug — as well as Chief Ovila Bezaire’s car and the department ambulance.

Under Chief Harold Coxon, the W.F.D. undertook a major study of its fire station locations in the mid-1960s. It was determined that the Pitt St. hall’s response district was restricted to the north by the Detroit River. A more central location was sought. So it was that in August, 1970 the Windsor Fire Department moved into its present home, a brand-new headquarters fire station at 815 Goyeau St. at Elliott St. E. The long, low two-story, five-bay hall featured drive-through bays so apparatus returning from a run could drive directly into their stalls from the rear of the building, instead of backing in and temporarily blocking traffic on busy Goyeau street leading to the Windsor/Detroit tunnel entrance.

The impressive new headquarters hall housed two pumpers (Engines 1 and 2), an aerial ladder truck (Ladder 1A), a District Chief’s command vehicle and a utility truck. Windsor’s first elevating platform, or Snorkel, was placed into service in this hall the following year. As in the two former stations, the new Headquarters hall housed the department’s administrative offices and communications centre as well as the quartermasters stores and fire prevention offices.

Coincidentally, by 2012 the present Goyeau St. headquarters station has been in use for 42 years – precisely as long as the Pitt Street hall it replaced (1928-1970) and two years longer than the department’s first headquarters hall – 40 years, from 1888-1928.

As this is being written, planning is already under way for an eventual new headquarters hall.