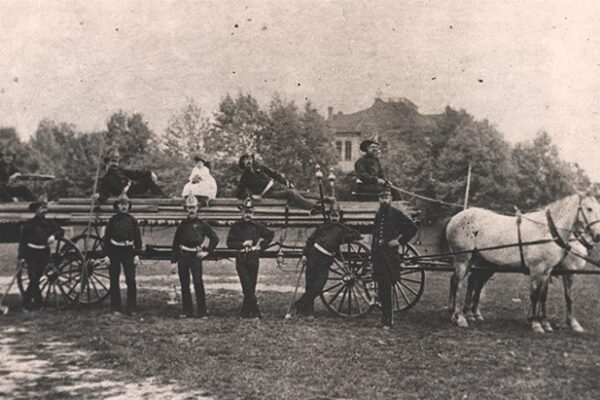 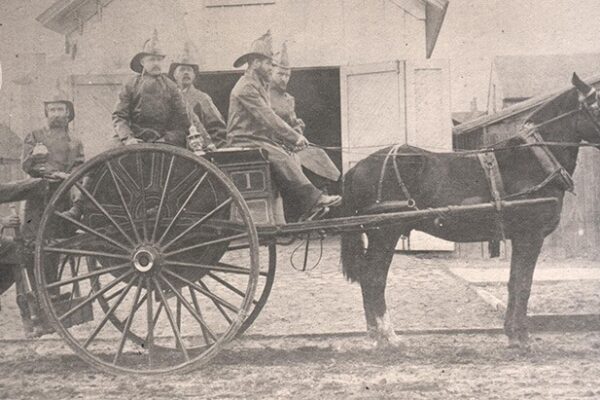 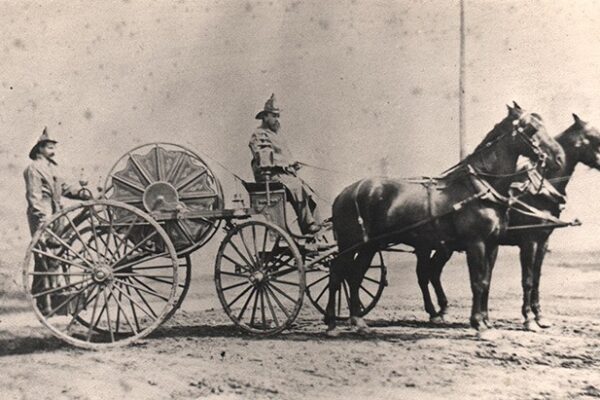 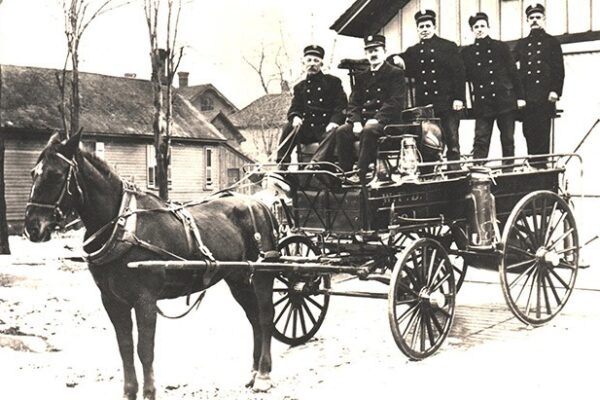 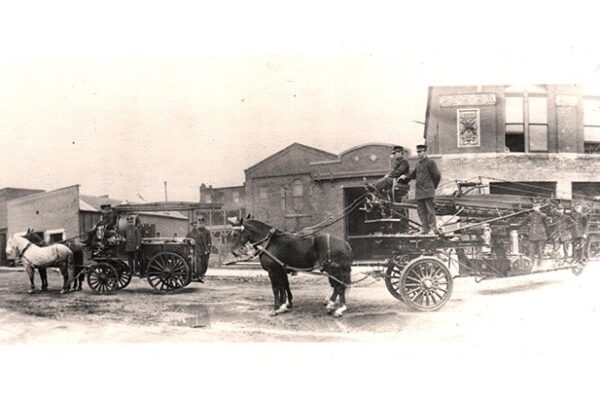 Passing Of Years Has Never Dimmed Regard For Gallant Steeds
By William F. Duggan

On Christmas Day, 1916 the few citizens stirring on Windsor streets witnessed a spectacle they were fated to never to see again. Fire horses were responding to their last alarm. Mark it down as another victory for the Machine Age, another mile on the path of progress a move to greater efficiency. Call it what you will, but when horses on the fire engines, ladder wagons and hose carts were replaced by gasoline-burning motors, something went out of the business of fighting fires.

“Motor apparatus has taken the romance out of the fire department”, said Fire Chief Clarence J. DeFields the other day, giving himself over to indulgence in nostalgic memories. He and several other members of his department were here in those days of not so long ago when speedy response to alarms depended on the horses. Only 21 years has passed since the fire horses were relieved of duty, but in that time, a generation has grown up which probably never visited the firehall, yet there are few beyond 40 who cannot recall how they used to make it a rendezvous.

“Why is that people do not drop around the fire station for a friendly chat with the men, or to watch as they polish the paint and metal on the shiny red wagons? I’ll tell you why. It’s because you don’t feed an apple to a motor, and you have no inclination to pat one of them on the nose. There’s no fun sitting around watching an engine being tuned up. When there was a stable at back of the firehall it was different. The practice hookups at 5:00 o’clock drew some of the watchers – men and boys who never tired of the spectacle of dumb beasts springing under their collars in answer to the signal.”

Chief DeFields recalled the names of several of the horses that were the pride of Windsor in the earty 1900s. There were several Toms, Princes and Bobs, and there were Doc, Dan, Duke, Black Diamond, Alex, Jack, Harry and King – all male names, you note. Without casting aspersion on the entire feminine gender, the Chief said the male of the species was a more dependable animal. Mares were regarded as “too temperamental” for the exacting work they had to do.

Harry was the veteran of the force. He was 27 years old when he died in his stall after 20 years of service. Bob died in harness on his way to a fire, responding to the third alarm that had been turned in within an hour. Duke died not long ago at the age of 30 years. Black Diamond died when he was only eight years old. As he was gasping his last breaths, his driver, Dugal Moyer, sat in his stall holding his head, tears streaming down his face.

“There”, said Chief DeFields, himself almost weeping at the memories, “Was the smartest horse I ever knew, the most beautiful horse I ever saw, and the most intelligent. He would put his lips against you cheek and kiss you, and snuggle his head into the crook of your arm. Those big red wagons downstairs are all very well, but somehow you can’t work up much of an affection for them”.

A team of horse was used for each piece of apparatus with the exception of hose carts which were drawn by a single horse. An intelligent  team could be trained to answer the alarm bell in four days to a week, becoming 75 per cent efficient in a month and 100 per cent efficient in two months. That’s more than you can say about the ordinary man”, Chief DeFields snorted. “It takes a man from one to two years to learn what he should know about his job around a fire”. The horses were kept in stalls at the rear of the apparatus. Doors in front of them were on springs. The instant an alarm came in, the man nearest pushed a button to open the doors and the horses rushed out and stood under their collars. The driver jumped into his seat and gave a sharp jerk to the reins, tripping the release so the combination collar and harness dropped down on the horses’ necks. Collars and reins were snapped on and the horses were away in a matter of seconds, breaking into a dead run as soon as the wagon began rolling.

“I never saw a horse that refused to do his duty or balked” Chief DeFields said. “I recall once that Prince ran out of the open doors when an alarm came in. He got as far as the market and then he seemed to figure that he had done wrong. He turned around and came back to stand under his collar. Practically no time was lost but he had us scared for a few seconds. The horses had almost human intelligence. The telephone would ring while they were munching their hay and oats. They would stop eating and gaze at the man who answered the telephone. If it was an ordinary conversation they would resume their lunch, but if the man showed excitement and shouted they were ready to dash out of their stalls”.

“There was never a man injured by a horse in my experience”, said the Chief. “One night we were going out Ouellette and one of the rein straps broke. I climbed over the footboard and walked out on the pole. I talked to the horses and quieted them down and they stopped and waited while I had the snap fixed. But most of the horses stood quietly after reaching a fire. Kids in the neighborhood wanted to hold them, but it was never necessary. As soon as the horses came to a halt, the driver leaped from the wagon and blanketed them, both in winter and summer as a safeguard against “cooling out” too fast. And the horses knew they were putting on a show as they raced through the streets. Everyone ran to watch the fire apparatus go by in those days, while people scarcely turn their heads now”.

The horses were exercised in relays for an hour and a half every morning. They were called to their collars twice daily. Their legs were washed every day and rubbed dry and their hooves were oiled and polished. Standing in dirty stalls and pounding along cobbled streets required special attention against foot ailments and frequently the hooves were packed with tar and okum. The horses were shod in a shop near the firehall as often as twice weekly in the winter when streets were icy.

Each horse consumed 20 to 30 pounds of hay a day and 12 quarts of oats. They got a special feed of hot oats and bran mash three times a week and as a result of the special care they received were seldom ill. A whip was never used unless absolutely necessary because the firemen dared not have the horses afraid of them. They had to have the implicit confidence of the horses so that they would answer any call that came in. If a horse was considered too old for duty he was turned over to the Board of Works or to a farmer who would give him good care and light work. So far as Chief DeFields knows, all retired fire horses fell into good hands.

For the matter, horses turned over to farmers were really going back to their original homes for the farms were the source of supply for fire horses. The ideal weight for a fire horse was 1,200 to 1,300 pounds and the ideal age between four and seven years. The short, blocky type was preferred and the younger horses were more easily trained. The best fire horse was cross-bred from blooded and draught horse stock.

Prince and Dan constituted the most intelligent team. They were full of life and liked to play little pranks. On request they would “shake hands” and bow. Duke loved a hamburger or hot dog with mustard as a special treat, while Prince enjoyed a boiled egg. Prince was quite disgusted when Chief DeFields fed him a raw egg. One day Prince amazed the fire laddies. Returned from a fire, he was unhitched and released to retire to his stall. Instead of walking around the pole, he backed 55 feet along a narrow corridor. Apparently he figured that method saved him steps because ever after he went to his stall the same way – walking backward. When worked in teams the horses developed a great attachment for each other. They were stalled as neighbors and when one of the pair was taken out for shoeing, his mate was waiting until he returned. On market days the farmers used to enjoy watching the fire horses go through their exercises. They never ceased to marvel at the neat way they walked under their collars and when an alarm came in those in the streets halted as the horses tore past.

“A good team cost about $600 and a hose wagon about $1,200”, said the Chief. “And anybody within hearing would rush to see that outfit go by. Now, $100,000 worth of equipment can scream down Pitt St. and people won’t even turn their heads”.

The Windsor Fire Department’s acquired its first piece of motor fire apparatus, a Seagrave pumping engine, in 1914 – presaging the doom of the fire horse just two years later. When this story was published 80 years ago, the W.F.D. had 98 personnel of all ranks; eight motor pumpers with pumping capacity of 600 to 1000 gallons-per-minute; two aerial ladder trucks, three city service ladder trucks, a rescue squad car and a salvage car.