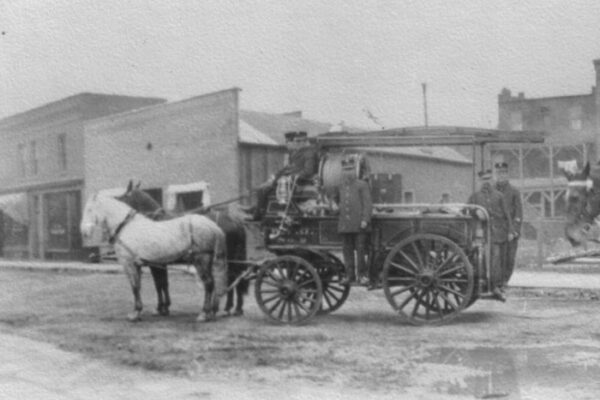 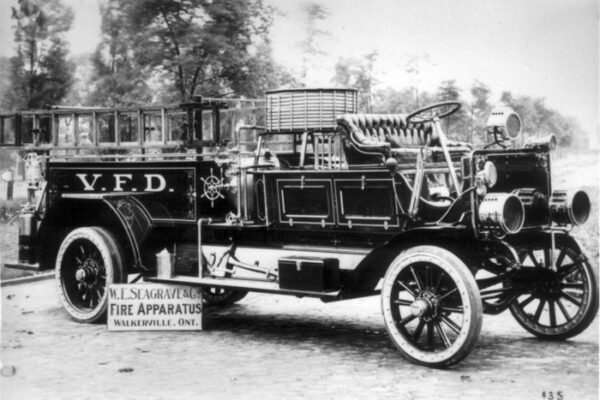 W.E. Seagrave Motor Combination like the one used in 1911 test run

Just over 100 years ago, the Windsor Fire Department participated in an epochal contest that pitted a horse-drawn fire wagon against a fast- emerging rival – one of the new-fangled motor-driven fire trucks.The test run was arranged by Alderman Thomas Eansor. No one at the downtown fire hall knew when or where the alarm would come from.

Just after 3:00 pm. on the afternoon of Thursday, April 27, 1911, Fire Chief George Murray pulled the hook on fire alarm box No.27 at the corner of London St. (now University Ave.) and Campbell Ave.

“The auto jumped into the lead and had no difficulty in maintaining it all the way”, the report in the following day’s Windsor Record duly reported, in an article headlined Auto Fire Wagon Demonstrates Its Superiority Over The Horses.

The 1911 Seagrave Model AC53 motor hose wagon, powered by an aircooled four-cylinder motor, made the two-mile run from the Windsor Fire Department ‘s Station #2 on Pitt St. E. in four minutes and 28 seconds. It took the horse-drawn hose wagon seven minutes and 21 seconds to cover the same distance. The return run back to the fire hall was actually made one minute faster than the response to the original alarm.

“The horses were about ‘all in’ at the end of the long run”, the newspaper report noted. “The test run emphatically demonstrated the great efficiency of the auto wagon. The Seagrave machine is complete in every detail and can certainly cover the ground”.

Before leaving the fire hall, Warren E. Seagrave — President of the W.E. Seagrave & Co. — gave firm instructions to his driver, C.O. Lanthorn, of the parent Seagrave Company’s plant in Columbus, Ohio …”not to take any chances whatsoever. He could have clipped off another minute or two in reckless driving, which he refused to do”. The run time was clocked by Alderman Tom Eansor, who had a stopwatch in each hand. Total run time including hooking a hose up to a hydrant and opening the nozzle.

Frederic S. Seagrave, founder of The Seagrave Co. of Columbus, O., set up a Canadian subsidiary company in Walkerville in 1901. A few years later the thriving company moved into a large, new plant on Walker Road. The company began making motor-driven fire apparatus in 1909. The W.E. Seagrave Co. went out of business in 1918. After 103 years, the historic two-story factory building was demolished in 2008.