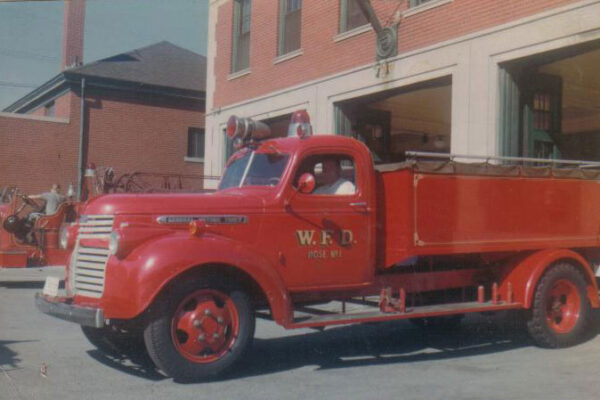 It was 1942, and the war had been raging in Europe for nearly three years. More than a few members of the Windsor Fire Department were in military service overseas – some of them battling huge blazes during the London Blitz. At home, the City of Windsor had become an important war production centre, with several major auto plants and numerous other vital defense industries. Windsor’s once-sleepy airport was a bustling RCAF training base, with greatly increased air traffic night and day,

To better protect these war industries, early in 1942 Chief Clarence J. DeFields decided to bolster the city’s firefighting defenses with a new hose truck which could carry a large amount (for the time) of 2-1/2” fire hose.

A two-ton General Motors Truck chassis was purchased in May of that year. Within months, Master Mechanic Art Flatray and his resourceful W.F.D. workshop staff had fabricated and mounted a large steel hose body on the GMC cab and chassis. The baffled hose bed could carry 5,000 feet of 2-1/2-inch fire hose but nothing else – no monitor nozzle, ladders or even booster equipment. Several shutoff nozzles and smooth-bore underwriter’s playpipes were mounted on the rubber-covered rear running board. A big Sterling 30 siren on the cab roof cleared the way through traffic.

Lettered Hose No. 1 on its cab doors, this very plain-looking hose wagon with three-man closed cab was placed in service at Station No. 2 on Richmond Street at Walker Road later that year. It was rarely called upon, but Hose No. 1 responded on all calls to Windsor Airport – a long run straight out dusty Walker Road.

After the war, Hose No. 1 was also used as a foam carrier. Two portable foamite generators and hoppers were mounted on the side running boards and a supply of large cans of foam concentrate were stored in one side of the truck’s capacious rear body. But except for the occasional airport run, Hose No. 1 rarely responded to alarms with the Windsor Fire Department’s other pumpers and ladder trucks.

But in 1956-57, Hose No. 1 finally began to really rack up the miles. In mid-1956, the department’s only rescue squad truck was taken out of service. Its rear body was removed by the shops and rebuilt for mounting on a new chassis. The 1942 GMC was pressed into service as the temporary rescue squad, running out of the W.F.D. Headquarters station on Pitt St. E.

For the better part of a year, Hose No. 1 ran as the city’s sole rescue and salvage vehicle. The hose load was removed and all of “The Bug’s” rescue gear was stashed in the open hose body. In the ensuing ten months, Hose No. 1 responded to more alarms than it had in the entire previous 14 years – among them the Jackson Park grandstand and Baum & Brody furniture warehouse fires in the summer of 1957.

When the new rescue truck was placed in service in the fall of 1957, Hose No. 1 went back to Station 2 where it languished at the back of an unused apparatus bay, parked behind the District Chief’s car.

After a few more years of relative idleness, in September 1965 the GMC hose wagon was retired and traded in on a new Chevrolet chassis purchased to build the city’s second rescue squad truck. Still lettered Hose No. 1, the 1942 GMC hose wagon was subsequently sold to a private citizen as a used truck. In the early 1970s it was still occasionally spotted on Windsor streets. But its new owner had removed the slab-sided hose box and replaced it with a flatbed stake body – an ignoble end for the W.F.D.’s only “war baby”

As a footnote, Hose No. 1 wasn’t the W.F.D.’s first hose wagon. In the horse-drawn era in the late 1800s, the W.F.D. had several hose reels. At least two four-wheeled, horse-drawn hose wagons remained in service until Windsor began motorizing its fire department in 1914.

So here’s to one of the W.F.D.’s all-but-forgotten firefighting warriors.