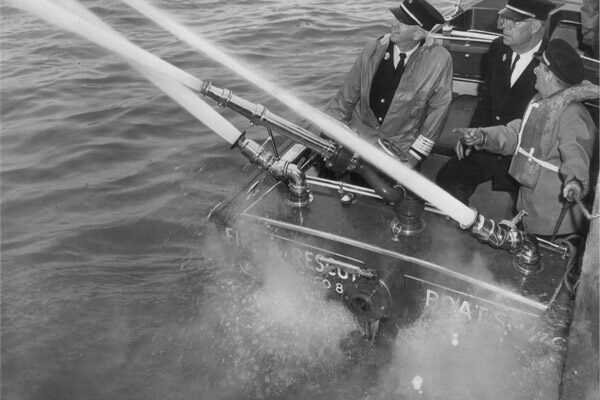 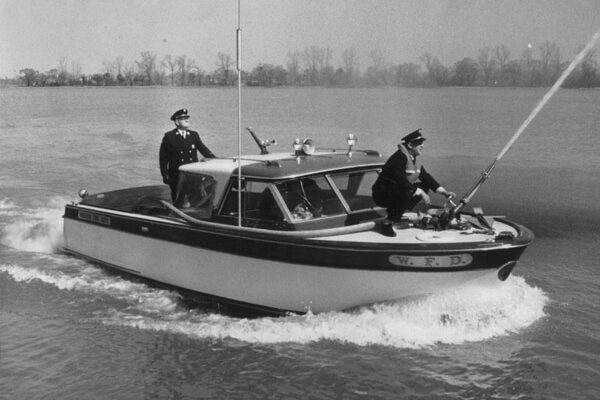 With an extensive, heavily built up Detroit River shoreline, Windsor has, for more than a century, relied on neighboring Detroit when a fireboat was needed to battle a major waterfront blaze. On several occasions the Detroit Fire Department has willingly sent its fireboats – first the James Battle, then the John Kendall and its current fireboat, the Curtis Randolph to Windsor’s aid when requested. The most recent of these international mutual aid calls was placed in April 1999, when flames roared through the former Holiday Inn on Riverside Drive W. at the foot of Ferry St.

In its long history, the Windsor Fire Department has owned and operated just one marine unit. In July 1967, Fire Chief Harold Coxon arranged for the purchase of a lightly-used 28-foot, steel-hulled boat from the Detroit-based McLouth Steel Corporation. Chief Coxon and Chief of Apparatus Melchior (Mike) Koehl took delivery of the former pleasure craft at McLouth’s private hunting preserve near Mitchell’s Bay on the Ontario side of Lake St. Clair and piloted it down the Detroit River back to Windsor.

Powered by two Chrysler V8 marine engines, the boat was then fitted with a Coventry Climax pump which fed a turret nozzle affixed to the bow. Christened Marine 1, the boat was berthed at the Windsor Yacht Club on Riverside Drive E. When needed, the boat was manned by firefighters from nearby Station 7 on Lauzon Rd. or — depending on the location of the emergency — by the crews of one of the city’s two Rescue Squads. Over the next decade Marine I responded to numerous incidents on the Canadian side of the Detroit River, where it was used for water rescue work and recovery operations by the Windsor Fire Department Scuba Team, as well as the Windsor Police.

With an increased river patrol presence by marine units of the Ontario Provincial Police and the Canadian Coast Guard, Marine 1 was retired and sold in the early 1980s.