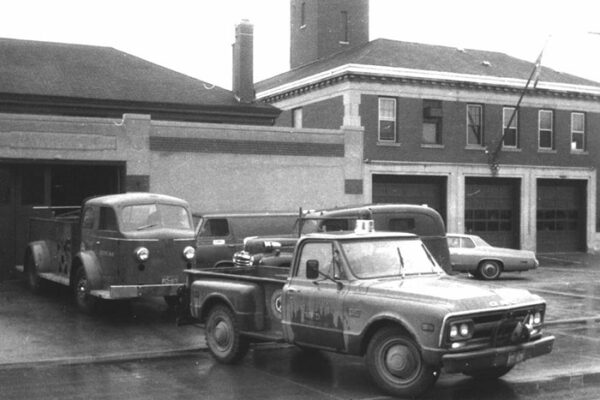 Leaving the shops for the last time. - Walt McCall Photo 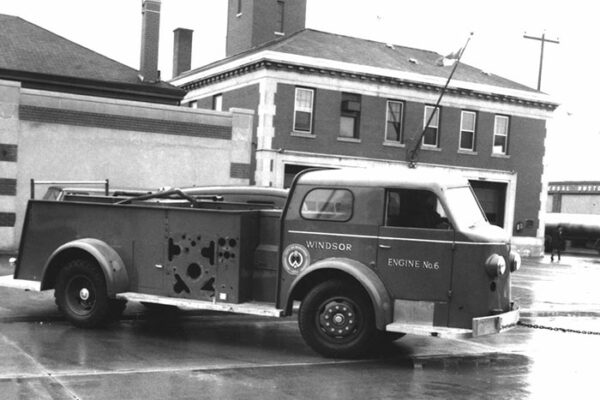 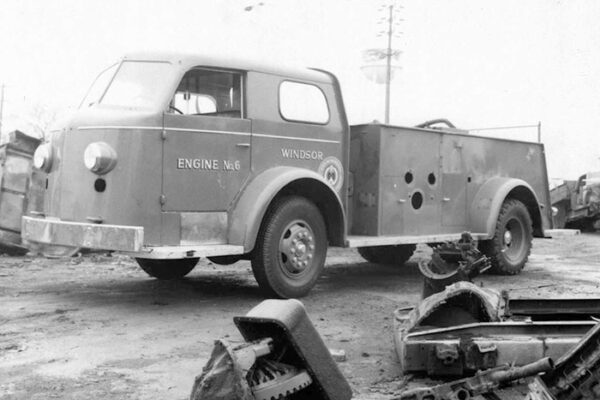 Old soldiers never die, it is said, but sadly, just like all worn-out passenger cars and trucks, most old fire engines are eventually hauled off to the junkyard.

And so it was that, after 26 years of dependable service, Engine No. 6’s final journey was a short one at the end of a tow chain, from the Windsor Fire Department workshop on Richmond St. next to the old Station 2, to a Drouillard Road junkyard.

But first let’s roll the clock back to a fine day in early April of 1948. The first new pumper the Windsor Fire Department had purchased since the 1920s had just completed its 245-mile delivery trip from the LaFrance Fire Engine Co. plant in Toronto where it was built, to Windsor. Lettered Engine No. 8 on its cab doors, it was one of the new American-LaFrance 700 Series fire engines – a radical new design that revolutionized motor fire apparatus design in North America. The breakthrough cab-forward design placed the driver ahead of the V-12 engine and front axle, providing excellent vision, a safety factor. The motor was directly attached to the midship-mounted 840 gpm pump. Windsor’s pumper was just the fourth of more than three thousand 700 Series fire trucks built over the next 12 years.

After its acceptance test on the Detroit River, the new pumper was placed into service at the W.F.D.’s headquarters station on Pitt St. E. When another new pumper was delivered two years later, Engine 8 was reassigned to Station 2. In 1952 it was moved again, to Station 3 on Turner Rd. near Tecumseh Rd. E. While responding to an alarm in July, 1964, Engine 8 was involved in a collision, with extensive damage to its front end. Over the next six months the pumper was overhauled and repaired by the W.F.D. shops. The 16-year-old pumper was repainted and relettered Engine No. 6. Its final years were spent as a spare pumper, filling in for front-line rigs that were in the shop for maintenance or repairs.

In late 1973, Engine 6’s V-12 engine blew. Parts were hard to come by, and the pumper was considered too old to repair. The pumper was stripped of any useful equipment and parts and sold for scrap for $175.

The end came on the drizzly afternoon of Friday, March 15, 1974. A stout chain was attached to Engine 6’s front bumper, the other to the Apparatus Division’s pickup. Old Engine 6 was towed two miles from the W.F.D. shops to the East Windsor Auto Wreckers junkyard on Drouillard Rd. There, the chain was disconnected and the bare metal hulk left to its fate – to be cut up into small pieces by welding torches.

It was my privilege to ride in her cab with W.F.D. Chief of apparatus Mike Koehl as the 1948 LaFrance made her last journey, like a grand old ocean liner headed for the breaker’s yard. But old Engine 6 went in dignity. Her manufacturer’s serial number plate still sits on my office desk. Rust in peace, good warrior! – Walt McCall