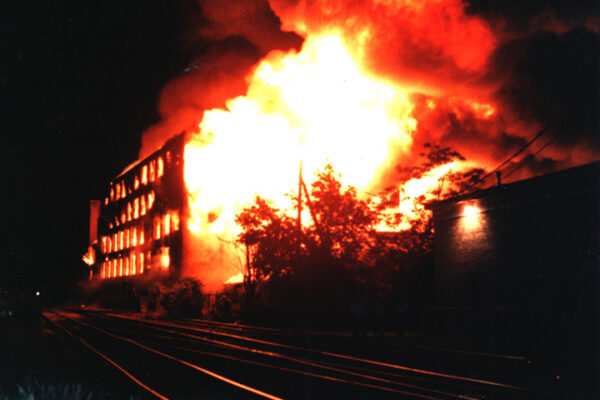 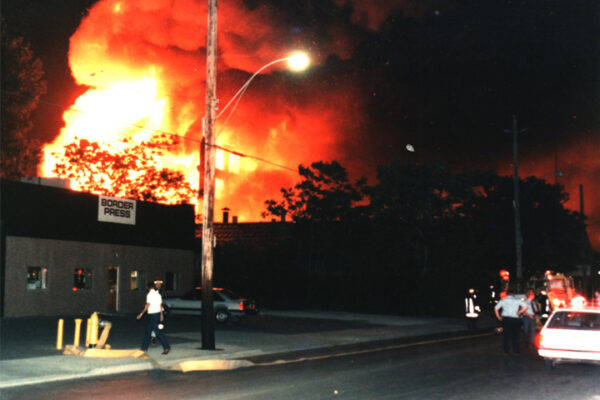 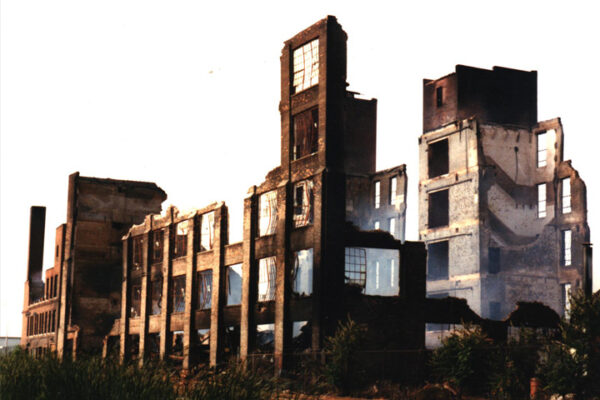 One of the largest and most spectacular fires in Windsor’s history consumed a sprawling factory complex at 945 Walker Road on the warm summer evening of Saturday, June 30, 1985. A pumper, aerial ladder truck and rescue squad responded to the alarm from Station 2 at Walker Rd. and Richmond St.,  little more than a block down the street. First-in crews found heavy smoke issuing from windows on the second floor of the three-story brick factory building which was occupied by a number of small businesses. Because of the heavy volume of fire rolling through the second floor, fire crews were ordered out of the building where they changed tactics to mount a vigorous exterior attack.

Despite their best efforts, however, the entire south wing of the three-story brick structure was soon engulfed in raging flames. Aerial Tower 1 was hastily withdrawn as portions of the building began to collapse. The fire quickly engulfed the other sections of the L-shaped structure. Within an hour the entire complex was involved in raging flames, sending up an immense plume of smoke which could be seen for many miles. Fire apparatus from fire halls across the city were summoned in successive extra alarms.

Built in the ‘teens  by American Auto Trimming, a maker of automobile tops,  the large two, three and five-story plant was later occupied by the Gotfredson Corporation – a prominent manufacturer of medium and heavy-duty trucks. Ironically, in the late 1920s Gotfredson built special fire apparatus chassis for Bickle Fire Engines Ltd. of Woodstock, Ont. After discontinuing motor truck production, the Gotfredson Corp. continued to produce truck bodies and other components for Ford of Canada’s Windsor plants into the 1950s.

By morning – Canada Day – nothing was left of the former factory complex but a burned-out shell, the tallest portion of which was the five-story elevator tower. Firefighters continued pouring water on the smouldering ruins throughout the weekend. The exact cause of the fire – which was believed to have originated in a furniture refinishing shop on the second floor — was never determined. Loss of the building and contents ran into the millions. – Walt McCall