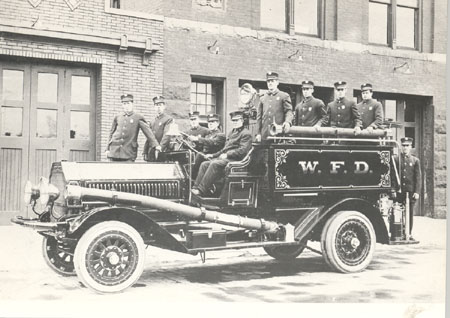 Engine No. 2 was the pride of the Windsor Fire Department for the next five years — until it was displaced as our showpiece downtown pumper by the W.F.D.’s first triple combination (pump, hose and chemical system) a Type 12 American-LaFrance 800 gpm rotary gear pumper delivered in 1919.

Engine 2 went into second-line service when Windsor acquired two more LaFrance triple combination pumpers during the 1920s. Nicknamed “Old Mike”, the venerable old Seagrave was redesignated Engine 1A, repainted and placed in reserve after the City of Windsor annexed the neighboring towns of Walkerville, Sandwich and Ford City in 1935.

“Old Mike” finished out her days in a back stall at Station 2, the former Walkerville fire hall on Walker Rd. at Richmond St. On standby during the Second World War, the now antiquated pumper was declared surplus in 1946. Shortly thereafter, “Old Mike” was towed to a local junkyard and broken up for scrap.

The W. E. Seagrave Company built only one other Model WC-96 – a white-painted twin to Windsor’s pumper that was delivered to Regina, Saskatchewan later that same year, 1914. The Walkerville factory also two gargantuan six-cylinder Model WC-144 turbine pumpers with 1100 gpm pumps for Montreal in 1914 and 1915.

The accompanying photos show the factory-fresh Seagrave WC96 drafting from the Detroit River during its acceptance test in April, 1914 and as it looked in its extreme youth in front of the former Fire Department Headquarters Station on Pitt St. E.- Walt McCall Collection