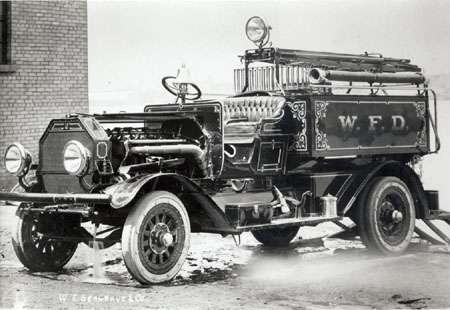 Purchased in 1914, Windsor’s first motor-driven pumper was also one of the first automobile pumping engines placed in service by a Canadian fire department. Toronto did not acquire first motor pumper until the following year.

Considered a real mechanical marvel at the time, Windsor’s first motor pumper was built by a local firm, the W.E. Seagrave Fire Apparatus Co. in nearbv Walkerville. Located on Walker Road, W.E. Seagrave was the Canadian subsidiary of the Seagrave Company of Columbus, Ohio. Founded in Detroit in 1881, Seagrave is still in business today. The lime-green 1991 Seagrave pumper currently in service at Station 7 (Shop #4007) is, in fact, a direct descendent of Windsor’s first motorized pumper which was delivered nearly a century ago.

Purchased at a cost of $12,000, the shiny new Seagrave Model WC-96 Combination Pump & Hose Car was placed in service as Engine #2 at Windsor’s Headquarters Fire Station on Pitt Street East in the downtown area in April, 1914, where it replaced a horse-drawn Amoskeag steam fire engine.The model name indicated a pumping engine powered by a watercooled 96-horsepower, four-cylinder motor. The 700 gallon-per-minute centrifugal pump, suction intake and 2-12” hose discharge gates were at the rear of the apparatus, under the hose bed. Engine 2 did not carry chemical or booster equipment.

With its massive gable hood and high hose box, the big chain-drive Seagrave rode on solid rubber tires. The steering wheel was on the right, the driver’s lofty perch directly amidships. The rig’s only warning device was a 12-inch locomotive bell mounted on the dash. A large swivel spotlight was mounted behind the driver’s seat and a 24-foot trussed ladder was carried above the hose bed. A length of hard suction hose was strapped to the left front fender. A second, shorter length of hard suction was mounted on the left side of the hose box. The number “2” was painted at the top of the radiator.