Returning a Favor – A Firefighting Tale of Two Cities 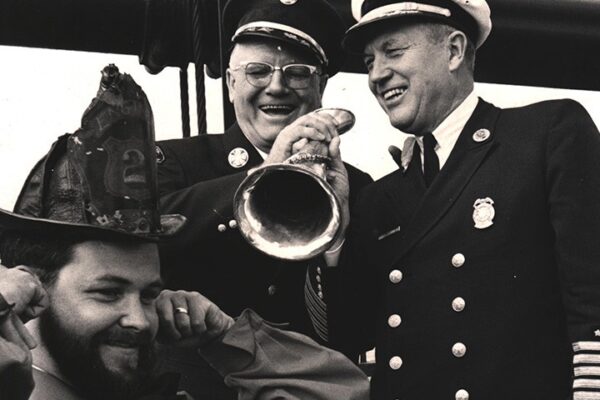 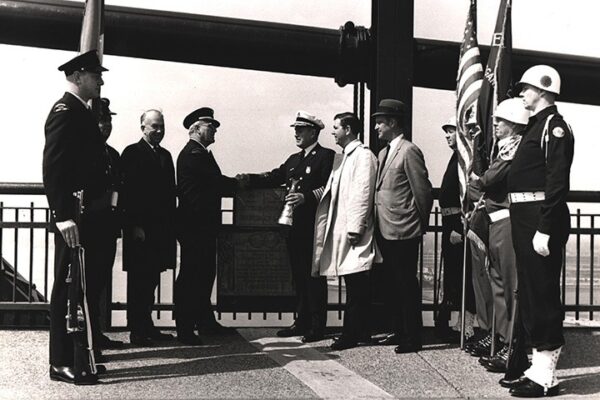 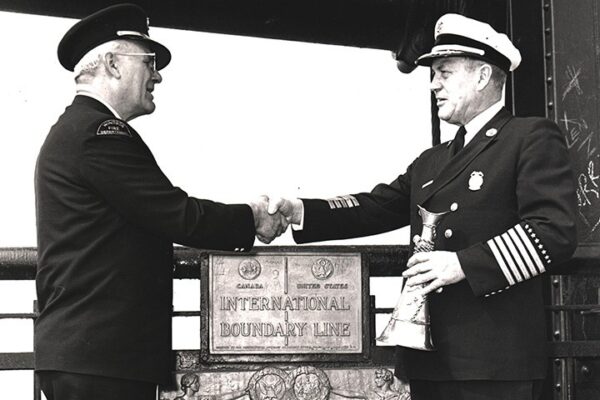 For well over 150 years, the fire departments of Windsor, Ontario and its much-larger American neighbor – Detroit, Michigan – have enjoyed a long and cordial professional relationship. On more than a few occasions, as the border cities thrived and grew, Detroit has unhesitatingly sent firefighters and equipment across the Detroit River when its Canadian neighbor has been threatened by their common foe – fire.

On a sunny April morning in 1969, there was a unique historical ceremony at the international boundary line in the middle of the Ambassador Bridge – the arching ribbon of steel and concrete that spans the Detroit River, connecting the border cities. It was 120 years ago that very day that most of Windsor’s business district lay in ashes. The bustling village had barely survived the most disastrous fire in its history. Had it not been for the bravery of the firemen of neighboring Detroit, all of Windsor would likely have burned to the ground.

So it was on Wednesday, April 16, 1969 the fire departments of both cities recalled that historic night. Attending a brief international ceremony on the bridge were Windsor Fire Chief Harold Coxon and Detroit Fire Chief Charles J. Quinlan. Also in attendance were Windsor Mayor John Wheelton and Detroit Fire Commissioner Thomas Angott, who represented Detroit Mayor Jerome P. Cavanagh. Chief Quinlan brought with him a fascinating relic of the 1849 fire to present to Chief Coxon – a silver ceremonial fire chief’s speaking trumpet which had been presented to the Detroit firemen by the grateful citizens of Windsor three months after the Great Fire of 1849.

Long before the introduction of electronic bullhorns and PA systems, fire chiefs used speaking trumpets to exhort their volunteer firemen to greater effort as they manned the handles of their hand-drawn, hand-operated pumpers. The speaking trumpet remains an iconic symbol of command and leadership on fire service uniform badges to this day.

The ornate, engraved speaking trumpet was later placed on display in the main lobby of Windsor’s new Headquarters fire station on Goyeau St. which opened the following year. Over the years the trumpet had also been displayed from time to time in the Detroit Fire Department’s own historical museum.

Shortly after 1:00 a.m. on the bitterly cold night of April 16, 1849, the bell in the tower of the old Presbyterian church in downtown Windsor pealed out its dreaded alarm of fire. The huge brick Dougall warehouse on Riverside Dr. E. at Ferry St., where the Cleary Auditorium (now the St. Clair College Centre For The Arts and Chrysler Theatre) now stands, was a seething mass of flames. Whipped by a strong northwest wind, the flames leaped across Ferry St. and enveloped building after building. The entire Detroit volunteer fire brigade rushed to the waterfront in awe.

It was a stroke of fate that only the previous year Detroit Fire Chief William Duncan had made an arrangement with several ferryboat operators that, in the event of a “large and disastrous fire in Windsor, a ferry would be sent and an engine company or two sent over to assist our Canadian neighbors”. Fortunately for Windsor, Chief Duncan kept his word that night.

Detroit’s Engine 5, a hand pumper, two hose carts and the men of Engine Companies 4 and 5 were loaded aboard the ferry Hastings and after what was recoded as a “extremely rough voyage” arrived at the Windsor village wharf. Within five minutes the Detroit firemen had hose streams playing on the fire.

The blaze was still gaining headway however, and was burning toward the large, frame Windsor Castle Hotel on Ouellette Ave. For two hours the Detroit firemen took up a hazardous position between the main fire and the hotel. Their helmets “burned to cinders and their hair and beards singed”, the Detroit volunteers saved the hotel and halted the advance of the flames. They returned to Detroit late the following morning. Windsor’s grateful citizens and firemen presented the elegant ceremonial speaking trumpet to the Detroit firemen on July 2, 1849.

Detroit firefighters and apparatus have crossed the river to fight fires in Windsor many times since that memorable night 166 years ago. No one ever really expected the much-smaller City of Windsor to ever return the favor, but that is precisely what happened in July of 1967 – less than two years before the bridge ceremony – when the Windsor Fire Department immediately responded to pleas from the beleaguered Detroit Fire Department for assistance during the city’s infamous riots. But that’s a story for another day.

As a footnote, the author of this piece actually played a minor role in the Ambassador Bridge ceremony. Then a reporter at The Windsor Star, he volunteered to dress as an old-time firefighter for the event – after which he rushed back to his office on Ferry St. – next door to the site of the 1849 fire — to write the story for the newspaper.