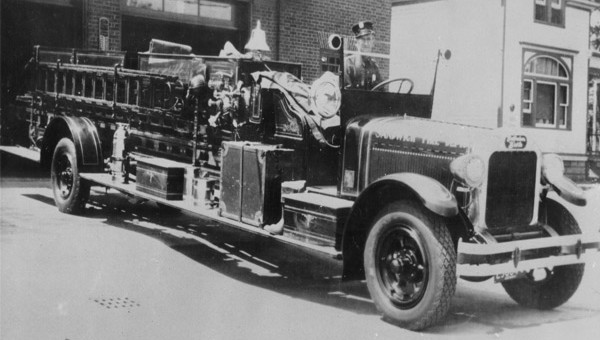 The 1927 Gotfredson-Bickle — Engine No. 1 on the Walkerville Fire Department — became Engine 1A and later Engine 7 in Windsor. After more than three decades of service the old Gotfredson pumper was completely rebuilt by Elcombe Engineering of Windsor in 1959. Finally retired from service in the late 1970s, the Elcombe was refurbished by the Windsor Fire Department shops and kept as a parade piece. Eight-two years after it was delivered, it’s still on the road today!

But there was once another long-forgotten Gotfredson on the W.F.D. roster. In 1927 — the same year Walkerville got its Gotfredson-Bickle pumper — the Town of Sandwich purchased a Gotfredson-Bickle city service hook and ladder truck. Like Walkerville’s pumper, the special fire apparatus chassis for this truck was built in the the Gotfredson Corporation factory on Walker Road in Walkerville. The long-wheelbase ladder truck body and other firefighting equipment were fitted to this chassis by Bickle Fire Engines Ltd. of Woodstock, Ontario at a contract price of $4,460 – less a $1,000 allowance for a Model “T” Ford/LaFrance ladder truck traded in.

Following the 1935 annexation, Sandwich’s Gotfredson-Bickle ladder truck and a 1930 Bickle pumper identical to one purchased by Walkerville the previous year joined the W.F.D. roster. Both remained at Station 6, the former Sandwich Fire Hall on Mill Street, for the rest of their careers. The Windsor shops added windshields to both rigs in the late 1930s.

In 1952 the Gotfredson-Bickle ladder truck was retired, replaced at Station 6 by a Ford cobover engine city service ladder truck built by the WFD shops in 1941. Somewhat ironically, the retired 1927 Gotfredson ladder truck was later sold to Elcombe Engineering, a truck body builder located at the foot of Mill Street near the Detroit River. Stripped of its ladder racks, it was used to haul truck bodies around the yard. A few years later it was gone, apparently to the scrapyard.