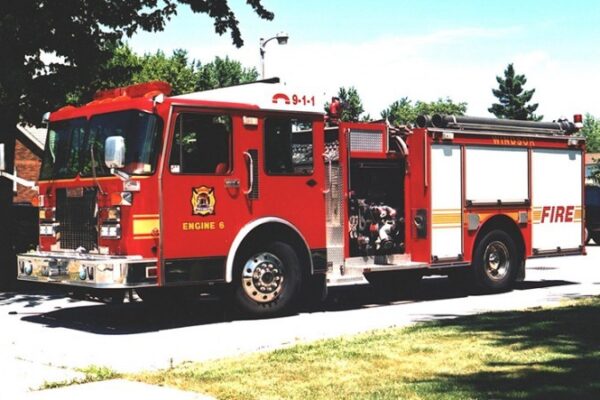 The CAFS engine in service as Engine 6 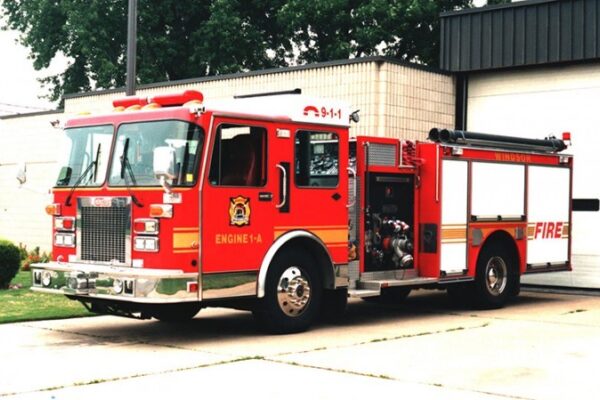 In late 1995, Windsor Fire & Rescue Services took delivery of a new triple combination pumper with a difference. Built by Carl Thibault Ltd. of Drummondville, Quebec on a Spartan custom chassis, the new pumper was Windsor’s first –and only – engine equipped with a CAFS Compressed Air Foam System.

A compressed air foam system is defined as a standard fire apparatus pump into which compressed air can be added to a foam solution to generate fire-killing foam. The compressor also provides extra energy, which propels the compressed air foam farther than a standard water nozzle. Components include a centrifugal fire pump, a water source, foam concentrate tanks, a rotary type air compressor, a direct-injection foam proportioning system on the discharge side of the pump, a mixing chamber or device, and a control system to ensure the correct mixture of concentrate, water and air.

Although the basic concept had been around for many years, it was the W.S. Darley Company of Chicago that championed the concept and became the fire apparatus industry’s leading proponent of CAFS firefighting technology. In 1994, the Darley company took a CAFS demonstrator pumper on a coast to coast tour across North America to spread the word about CAFS and demonstrate this relatively new technology to the U.S. and Canadian fire service.

Among those convinced of the CAFS system’s superiority was Windsor Fire Chief David Fields, who decided to equip the department’s next new pumper with the system. The Carl Thibault pumper was equipped with a Darley 1050 gallon-per-minute pump with CAFS system and a 400-gallon booster tank. The compact rig also had a four-door cab with raised rear roof.

The CAFS pumper was placed into service in early 1996 as Engine No. 1A – the second-out engine at WFRS Headquarters station on Goyeau St. After several years of service there, it was later reassigned to Station 6 on Tecumseh Rd. E. In 2004, the CAFS engine was transferred to Station 4 on College Ave. With the later acquisition of six Rosenbauer/Spartan pumpers with rear mounted pumps, the CAFS engine went into the spare fleet.
In 2011, after sixteen years of service to the WFRS, the CAFS pumper was donated to the St. Clair College Fire Services training facility in Sarnia.