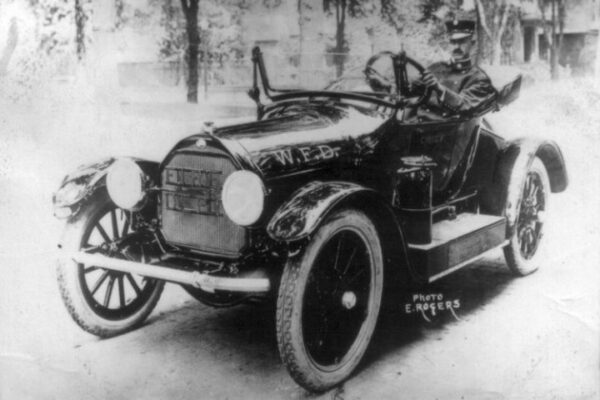 Chief Clarence DeFields poses behind wheel of his racy 1916 Overland

Ever since horses replaced manpower to pull fire apparatus, the Chief Engineer – or Fire Chief in today’s vernacular — has traditionally sped to fires in his own special vehicle. During the colorful horse-drawn era, the Chief’s Buggy was as common as the steam fire engine or hose wagon.

Windsor’s first fire Chief, James Murray, undoubtedly had his own one-horse buggy. But Chief Clarence E. DeFields – Windsor’s longest-serving fire chief (1916-1947) — was the first to answer alarms in his own department automobile, a locally-built 1914 Ford Model “T” Roadster. Two years after Windsor acquired its first motor-driven fire apparatus – a 1914 W.E. Seagrave pumper and two Menard motor hose wagons – Chief DeFields moved up into a 1916 Overland Roadster. The speedy little Overland was painted fire department red, with “Fire Chief” on its radiator and “W.F.D.” on its curved hood. For fighting small blazes, a 2.5-gallon soda and acid fire extinguisher was mounted on the left side running board. In 1926 a Model “T” Ford was purchased for the Assistant Chief.

In 1929 Chief DeFields got his first closed car — a Studebaker Commander Coupe. Two years later that vehicle was wrecked in a collision with a street car on London St. W. (now University Ave.) as Chief DeFields responded to an alarm from his west side home .Written off, the heavily damaged Studebaker was stripped of its body and converted by the W.F.D. workshop into the Windsor Fire Department’s first Rescue Car. Ironically, that car’s replacement, a 1931 Dodge coupe, was later converted into the department’s first Salvage Car.

Chief’s vehicles tended to last a long time. The Plymouth Coupe purchased for the Assistant Chief in 1930 was in service for an entire decade, finally retired and scrapped in 1940. The next new Chief’s Car was a 1941 Plymouth sedan. In 1949 the Assistant Chief was assigned a new Dodge Business Coupe. A new Chevrolet sedan was placed into service in 1953. The 1953 Chevrolet was the first Windsor chief’s car equipped with red warning lights – a small beacon-type light mounted on the car’s roof. The postwar chief’s cars were also equipped with two-way radios for direct communication with the Fire Alarm Office on the second floor of the Headquarters Fire Station at 254 Pitt St. E.

We’ll review the department’s later vehicular acquisitions in our next installment.

The W.F.D. purchased its first station wagon in 1961. The four-door, steel-bodied 1961 Chevrolet station wagon was much more versatile than a conventional sedan, with plenty of space in the rear for carrying equipment like air bottles, turnout gear, radio equipment, etc. Not only did this versatile vehicle serve as the department’s first Command Car, it was also equipped with the department’s first electronic siren. Half a dozen more station wagons followed: 1966 and 1968 Plymouths; a 1968 Chevrolet; a 1963 Plymouth wagon for the Training Division, and 1971 and 1972 Plymouth station wagons.