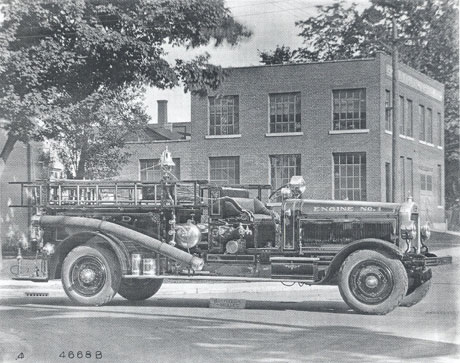 The Gotfredson-Bickle's "maiden portrait" taken in front of the Bickle Fire Engines Ltd. plant in Woodstock before it was delivered to Walkerville 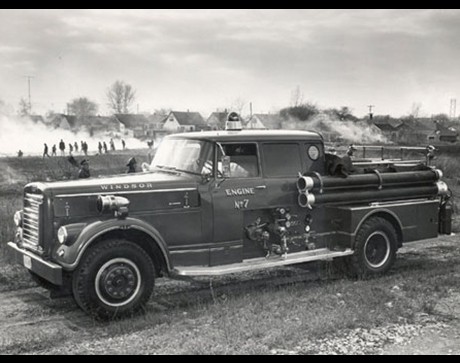 The rebuilt, re-powered and re-painted Gotfredson-Bickle undergoes its pump test before being placed back in service as Engine No. 7 in 1953 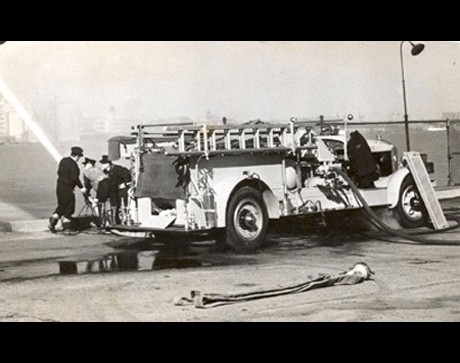 In its second career as The Elcombe, Engine No. 7 battles a grass fire in Windsor's west end

You’ve seen it in parades and at other community events, and perhaps you’ve even ridden on it — but what the heck is the Elcombe, anyway?

Currently in storage at the WF&RS Apparatus Division shops on Kew Street, the Elcombe is a genuine one-of-a-kind fire engine. It’s also by far the longest-serving piece of apparatus in the Windsor Fire Department’s entire history.

The Elcombe story begins in May of 1927, when Walkerville Fire Chief Hedley G. Coates signed a purchase order for the Walkerville Fire Department’s first motor-driven pumper. The contract was for a 1,000 gallon-per-minute (US) triple combination pumper, to be delivered within 90 days.

The chassis for this apparatus was made in the Gotfredson Truck Corporation plant on Walker Road, just a few blocks up the street from the Walkerville Fire Hall. The completed chassis, powered by a Sterling six-cylinder motor, was shipped to Bickle Fire Engines Ltd. in Woodstock, where it was equipped with an 800 Imperial gpm rotary gear pump, hose body, soda-and-acid chemical tank and other firefighting equipment.

In early August, resplendent in its bright red paint and fancy gold-leaf striping and trim, the factory-fresh Gotfredson-Bickle pumper was photographed in front of the Bickle plant on Young Street. But the shiny new pumper wasn’t shipped directly to Walkerville. With Chief Coates’ permission, the state-of-the-art pumping engine was exhibited at a fire chiefs’ conference in Hull, Quebec before it was delivered to the Town of Walkerville.

Lettered “Engine No. 1” on its long hood, the 1927 Gotfredson-Bickle was placed into service on August 23, 1927. Because of the town’s close proximity to the neighboring City of Windsor, its hose body was lettered “Wv.F.D.” to differentiate it from Windsor’s “W.F.D.”

Two years later the Gotfredson was displaced as Walkerville’s front-line pumper by a 1929 Bickle pumper and reassigned to the town’s new No. 2 Station on Turner Road near Tecumseh Road E. The Gotfredson’s Sterling Chevron motor proved unsatisfactory for fire service, and in 1930 was replaced with a Waukesha six-cylinder engine.

On July 1, 1935 the City of Windsor annexed the surrounding communities of Walkerville, Sandwich and East Windsor. These three fire departments were amalgamated into a much-enlarged Windsor Fire Department. Runumbered Engine No. 2A, the Gotfredson-Bickle responded to alarms out of the Richmond Street station with Engine No. 2 – the former Town of Walkerville’s 1929 Bickle pumper. Engine 2A was later moved downtown to the Pitt St. E. Headquarters station, where it was redesignated Engine No. 7. Master Mechanic Art Flatray installed a one-piece windshield on the Gotfredson in the late 1930s.

In 1949 the 22-year-old Gotfredson-Bickle’s original rotary gear pump was replaced with a new Hale centrifugal pump. Four years later, the Gotfredson was completely overhauled in the W.F.D. shops next door to Station 2 on Richmond St. In addition to a new Waukesha six-cylinder motor, Engine No. 7 was placed back into service at Station 5 on Wellington St, just north of Wyandotte St. West.

Nine years later, the Gotfredson was again showing its age. Fire Chief Ovila Bezaire implored Windsor City Council to let him replace four aging pumpers – two Bickles built in 1929 and 1930, a chain-drive 1925 LaFrance – and the Gotfredson. Elcombe Engineering Ltd., a local truck body builder, won the contract to rebuild and modernize the old pumpers for what was supposed to a fraction of the cost of four new ones. As it turned out, the Gotfredson was the first – and last.

In 1958, Engine No. 7 was delivered to the Elcombe factory on Russell St., near the foot of Mill Street. The 31-year-old pumper was stripped down to its bare frame. A modern canopy style cab and body which utilized some International Harvester truck body panels was designed and built. An Elcombe script nameplate was affixed to the top of the handsome new radiator grille. Now barely recognizable as its former self, the “born-again” Engine No. 7 was placed back in service at Station 5 in mid-1959.

In the fall of 1961 the single-bay, cottage style Station 5 was closed and later torn down. Engine 7 was relocated to the W.F.D. Headquarters station at 254 Pitt Street E, where it ran as the “second engine”, behind Engine No. 1 — a 1960 Pierre Thibault pumper.

Engine No. 7’s finest hour came in late July, 1967, when the Elcombe responded (along with Engine 2, a 1965 Mack) to the beleaguered Detroit Fire Department’s plea for help during the riots which left much of the city in ashes. For the better part of two days — its windows taped over and the target of sporadic gunfire — Engines 7 and 2 battled fires all over the city, often sharing hydrants with engines from fire departments from as far way as Toledo.

With the delivery of a new pumper in 1973, the Elcombe became a spare, filling in for other pumpers in the shop for maintenance or repairs. During this time the Elcombe filled in at one time or another at every station in the city, sometimes for extended periods.

Chief of Apparatus Melchior (Mike) Koehl, who had often worked on the Elcombe since joining the Apparatus Division as a mechanic many years earlier, kept close tabs on the aging pumper. When four new lime-yellow pumpers were delivered in 1977 — and the Elcombe by all rights should have been put out to pasture – Mike always found an empty apparatus bay somewhere in the city to store it.

Over a period of several years in the mid-1980s, under Mike Koehl’s direction, the workshop staff quietly restored the Elcombe (now lettered Engine No. 7A) to its 1959 appearance. Shop staff and W.F.D. members drove the repainted, nicely restored old engine in parades and at antique fire engine musters all over Southwestern Ontario and Michigan. When he passed away suddenly in 1990, District Chief Koehl’s casket was taken to the cemetery atop the hose bed of his beloved Elcombe.

A few years ago, the Elcombe was placed into storage in an outbuilding behind the Kew Street Shops. Ironically, one side of the old warhorse pumper was scorched in a minor fire in this structure.

Today – more than three quarters of a century after it was delivered – the 1927 Gotfredson-Bickle is still on the road. The only original parts visible on the 78-year-old pumper today are the bell on its right front fender, its two lengths of hard suction hose and the screened hose strainer on the running board. But underneath that 1950s-era body sheet metal lies her sturdy original chassis frame.

It’s unlikely that any piece of fire apparatus anywhere in Canada can boast of such a long, multi-faceted service life. But the Elcombe is starting to look shabby again. It’s time to find this remarkable living piece of Windsor fire service history a suitable — and permanent — place of honor.

As a footnote, the former Gotfredson factory in the 900 block of Walker Road, where the Elcombe’s chassis was built, burned down in a spectacular fire the night of June 30, 1985.