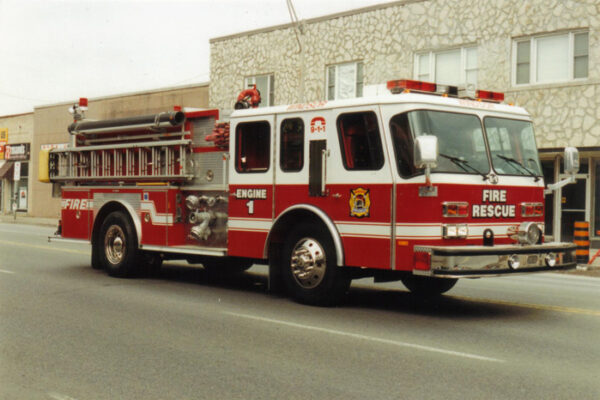 In 1974, retired playground equipment maker Robert Wormser constructed a light-duty rescue unit in the garage of his Florida home. Buoyed by its success, he formed a company to make light attack-type minipumpers and rescue units in a small factory in Orlando. The name of this ambitious new enterprise: Emergency One.

Emergency One achieved remarkable success simply by not building fire apparatus the way its competitors did. The aggressive young company offered its customers a series of modular pumper and rescue bodies made from extruded aluminum components. Built up in advance, these interchangeable modules could be quickly installed on any chassis – Ford, Chevrolet, GMC, Dodge etc. — desired by the customer. Employing these then-unorthodox assembly methods, and by keeping a large inventory of chassis and pumps on hand, Emergency One could deliver a new pumper or rescue unit in as little as 30 to 60 days instead of the six months to a year or more needed by its older, larger competitors.

Within a few years E-One was one of the industry’s largest and most successful players. The company quickly expanded its popular product line to also include aerial ladder trucks and big airport crash trucks. In 1984 the company introduced its own custom fire apparatus chassis, the Hurricane, which was soon followed by the rear-engined Hush and tilt-cab Cyclone.

In 1992, E-One entered the attractive Canadian fire apparatus market with its purchase of Superior Emergency Equipment of Red Deer, Alberta which it later renamed E-One Canada. Soon the oval E-One nameplate could be found on pumpers and aerials in fire halls across the nation.

As part of its ongoing apparatus replacement and upgrade program, the Windsor Fire & Rescue Services purchased a pair of E-One custom-chassis pumpers in early 1996. The matched pair of factory demonstrators – with 1250 gpm pumps and 600-gallon booster tanks – were built in E-One’s home plant in Ocala, Florida. The low-slung diesel-powered pumpers were painted white-over-red and had four-door sedan style cabs. Delivered to the WFRS shops in the spring of 1996, they were initially assigned as Engines 4 and Engine 6. With the delivery of new apparatus in the early years of the new millennium, the E-Ones moved around a lot, the numbers of their cab doors frequently changing. For a time, one of them responded as Engine 1 out of the headquarters station on Goyeau Street.

The E-Ones have served the WFRS and the citizens of Windsor well in the decade and a half since they were purchased. At the time of writing they were both still going strong – one as Engine 7 at the Lauzon Road hall and the other as an active spare. Over their long service lives, the Hurricane Twins have at one time or another been assigned to every fire station in Windsor. Long may they serve!