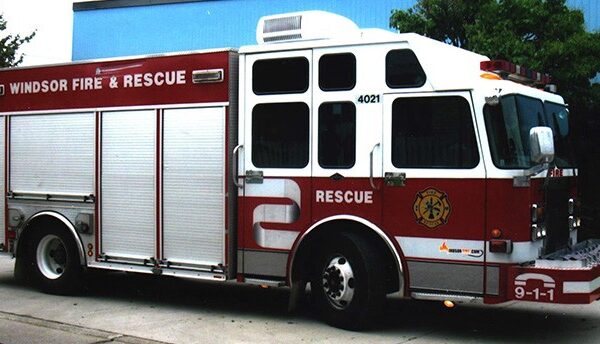 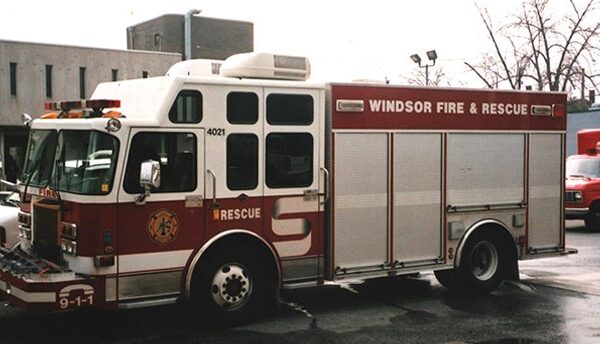 The 2001 Luverne/Spartan Squad at WFRS Headquarters

It’s a long way from sunny Phoenix, Arizona to Canada’s southernmost city, but one of the more interesting rigs to see service with the Windsor Fire & Rescue Service made that long trek northward in 2003. The apparatus was a heavy-duty rescue squad purchased by Windsor from the Phoenix Fire Department.

Built by the Luverne Fire Apparatus Company of Brandon, South Dakota on a 2001 Spartan custom chassis with raised-roof crew cab, the heavy rescue unit has eight large equipment compartments – four on each side of its ample body — with roll-up doors. The truck is also equipped with a 500 gallon-per-minute booster pump and 500-gallon water tank. A preconnected attack hose line is carried in a transverse tray on the truck’s extended front bumper.

But the new rescue rig’s most unique visual feature is a pair of big air conditioning units mounted on the cab roof – intended to keep the truck’s crew cool in Phoenix’s often-sweltering desert heat. A Federal “Q” mechanical siren and dual air horns siren are mounted in the centre of the rig’s massive front bumper. On the street, the Luverne is easily recognizable by the distinctive Phoenix-style “S”-shaped reflective striping on its rear cab doors.

Following a two-year experiment with intermediate-sized rescue squad apparatus, the Phoenix Fire Department took the 2001 Luverne/Spartan squad out of service and put it up for sale. In 2003, former Windsor Fire Chief David Fields scooped up the nearly new custom-built apparatus for a fraction of its original purchase price and had it shipped to Windsor. The white-over-red Luverne/Spartan squad was placed into service later that year as Rescue 6 at Station 6 on Tecumseh Rd. E. With the later acquisition of several Rosenbauer/Spartan rescue pumpers, the Luverne was reassigned to the Headquarters Fire Hall on Goyeau St. where it is used today as a backup or spare rescue squad.

The Luverne was the first fire apparatus in Windsor to feature high-visibility graphics across the rear of the truck’s body for maximum visibility when parked on the roadway at emergency scenes. All WFRS apparatus subsequently purchased have large format reflective chevron rear markings.

There are very few Luvernes in Canada. Founded in Luverne, Minnesota in 1903, the company relocated to Brandon, South Dakota in 1985. In 1997, Luverne Fire Apparatus was acquired by custom chassis maker Spartan Motors of Charlotte, Michigan which also purchased another U.S. fire apparatus builder, Quality Fire Apparatus of Talladega, Alabama. Both of these firms were merged into a new entity called Crimson Fire. Crimson has since been integrated into of Spartan’s ERV fire apparatus manufacturing division.