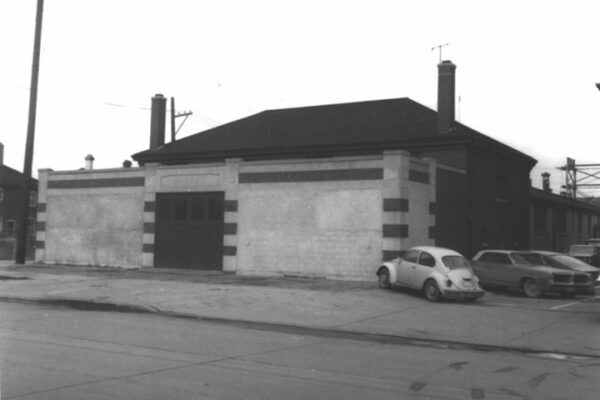 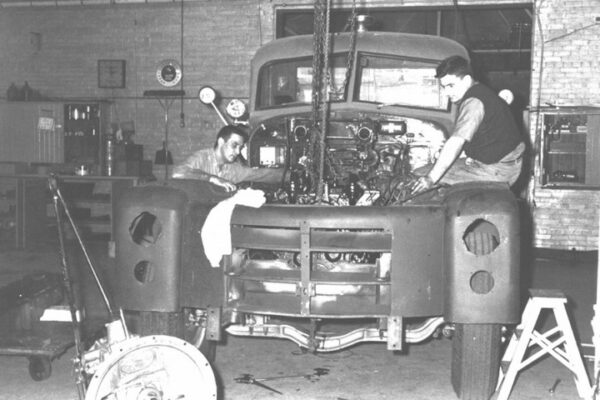 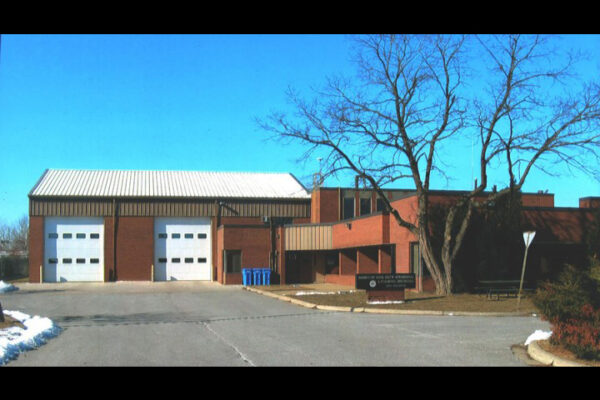 Fire engines are complex, sophisticated machines that require a high level of care and maintenance to meet the critical demands of emergency service. Motors, pumps, and aerial devices must always be in tip-top operating condition if the apparatus is to fulfill its noble purpose – to save lives and property.

Long before motor-driven fire apparatus began to replace horse-drawn vehicles, metropolitan fire departments set up their own specialized workshops — under the direction of an experienced Master Mechanic — to maintain and repair the city’s fire apparatus, and to train firefighters in its use.

In the first few decades of the 20th Century, when Windsor had just three fire halls and only half a dozen vehicles, routine maintenance and any necessary repairs were done in one of the apparatus bays at the Windsor Fire Department’s headquarters fire station on Pitt Street E.

But in 1935 – with the annexation of the surrounding towns of Walkerville, Sandwich and East Windsor, the Windsor Fire Department and its firefighting fleet more than doubled in size. To handle the greatly increased maintenance requirements, the W.F.D. shortly thereafter established a dedicated fire apparatus maintenance and repair facility in the former Walkerville Public Market building on Huron St. (now Richmond St.) near Walker Road, next door to the Walkerville Fire Station renumbered Windsor Station #2. The open-air front portion of the structure was eventually closed in, but the word “Market” remained on the door lintel for many years. Divided into three longitudinal sections, the main shop floor was long enough to accommodate the department’s longest aerial ladder trucks.

The W.F.D.’s Signals Division, which maintained the city’s fire alarm system and hundreds of street fire alarm boxes, occupied the rear of the workshop building for many years.

In addition to servicing and repairing department vehicles ranging from automobiles to pumpers, rescue trucks and the largest ladder trucks, all new apparatus was delivered to “the shops” for testing and crew training. Older spare pumpers, used as fill-ins while front-line engines were in the shop for service or repairs, were also kept at The Shops. The shop’s mechanics rebuilt motors as well as maintaining tools and equipment like air masks and portable generators. Hose testing was done annually behind the shops. The resourceful Apparatus Division even custom-built some motor fire apparatus on locally-purchased truck chassis, including two city service ladder trucks, a hose truck and three rescue squad vehicles.

The Windsor Fire Department Apparatus Division Shops at 2274 Richmond St. served the W.F.D. well for more than 40 years, but by the 1980s was overcrowded and lacked the special shop equipment needed to maintain the city’s large fleet of increasingly larger and more complex apparatus. In 1982, the Apparatus Division moved into a new, much larger fully-equipped workshop at 2885 Kew Drive in the city’s east end. The impressive new fire department shops complex also housed the Training Division’s offices and classrooms and a well-equipped outdoor training facility with training tower.

Through the years, the Windsor Shops were headed up by some highly skilled and resourceful leaders, among them the late Arthur Flatray, who was succeeded by Romeo Nantais and Melchior J.(Mike) Koehl. Today’ the Windsor Fire & Rescue Service’s repair shops are headed by Roger Zannetin – Director of Emergency Apparatus & Equipment.