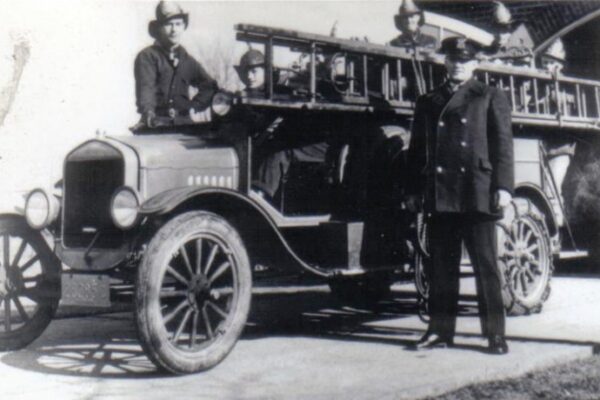 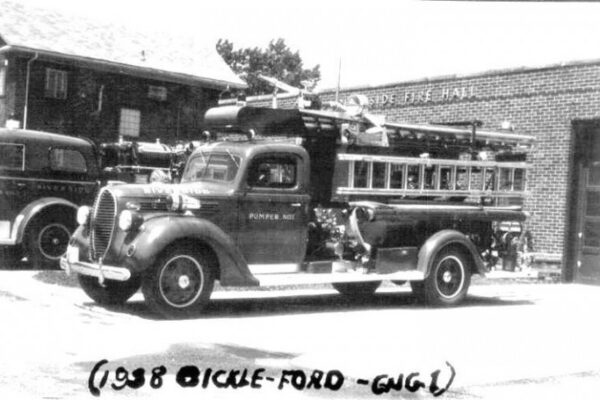 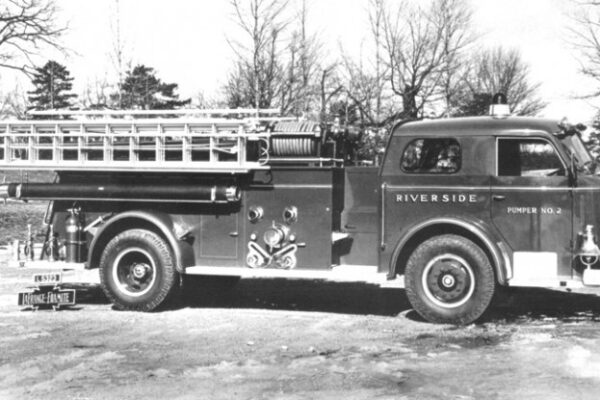 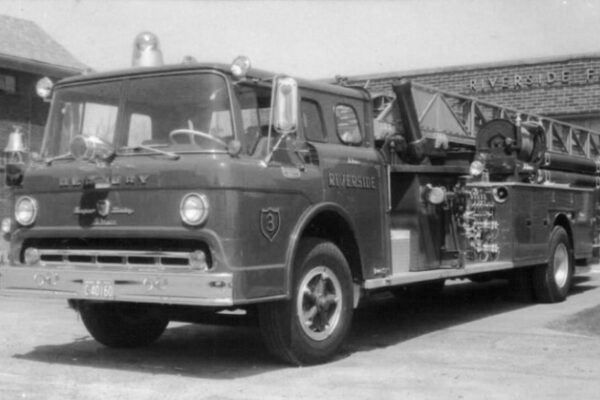 The small volunteer fire department’s first motorized fire truck was a 1924 Ford Model “T” combination hose and chemical car built by the American-LaFrance Fire Engine Company of Canada in its plant in Toronto, Ontario. Tiny by today’s standards, it was speedy and well-equipped for its time.

After 14 years of faithful service the Model “T” Ford was replaced by a 1938 Ford pumper built by Bickle-Seagrave Ltd. of Woodstock, Ontario. Equipped with a 420 gallon-per-minute pump and modern closed cab, the 1938 Ford served Riverside for 18 years, when Pumper No. 1 was displaced as the department’s front-line pumper by a 1956 American-LaFrance. The cab-forward 700 Series pumper was powered by a V-12 engine and had an 840 gpm pump and 400-gallon booster tank. It was lettered Pumper No. 2 on its cab doors.

Even with annexation looming, the Riverside Fire Department under the leadership of Chief Ken Friest, ordered its first (and last) aerial ladder truck. Delivered in November, 1964, the big quintuple combination pumper and aerial truck on Mercury chassis had a seven-man canopy cab, 100-foot steel aerial ladder and 840 gpm pump.

On January 1, 1966 the City of Windsor annexed Riverside and portions of Sandwich East Township. Within months, the nearly-new aerial was moved to Windsor’s Station 4 on College Ave. The 1956 American-LaFrance pumper was relettered Windsor Engine No. 9, but remained in the former Riverside Fire Hall on Lauzon Road just south of Riverside Dr. E. The 1938 Ford, later renamed Engine 11, became a parade rig.

All of the former Riverside rigs are gone now. Later repainted yellow and repowered with a Ford V8 engine, the 1956 LaFrance was sold to Buckhorn, Ontario in 1982. Also repainted yellow, the big 1964 LaFrance/Mercury Quint was retired and sold as surplus in the late 1990s. After many years as a parade unit, the 1938 Ford was also sold to a private citizen.

Opened in 1955, the former Riverside Fire Hall on Lauzon Road south of Riverside Drive E. will be closed when Windsor’s new Station 7 further down Lauzon Rd. at McHugh St. is opened about a year from now.