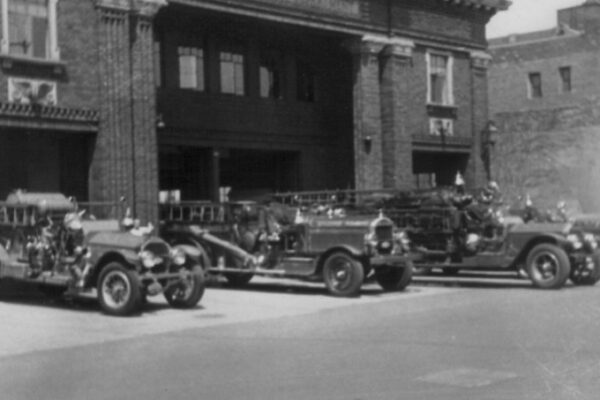 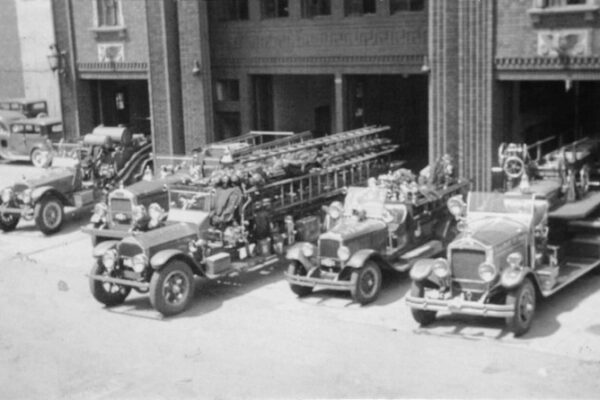 Sometime in late May of 1939, a photographer – his name lost to time — climbed to the roof of the bustling Windsor City Market on Pitt St. E. Looking down, he trained his lens on the apron of the Windsor Fire Department Headquarters Station across the street, and clicked the shutter. What he captured on his black-and-white film nearly three-quarters of a century ago was an instant in the history of the Windsor Fire Department.

The devastating Depression was finally all but over and a measure of confidence and prosperity had returned to the nation. The Border City’s auto factories were humming again. Just four years earlier, on July 1, 1935 the City of Windsor had amalgamated the adjoining towns of Walkerville, East Windsor and Sandwich. The four fire departments were combined into one. It was a complex reorganization, absorbing and integrating as it did the men, apparatus and stations of the three smaller departments.

The imposing three-story brick fire station at 254 Pitt St. E. was eleven years old, having been opened in 1928. In addition to the department’s administrative offices, including that of Fire Chief Hedley G. Coates — the city’s largest fire hall housed five pieces of front-line motor fire apparatus. All had wide-open cabs, with windshields. The newest was a three-year-old aerial ladder truck, the oldest a 19-year-old service ladder truck.

On that presumably sunny spring morning, the on-duty crew at Fire Station No. 1 at 254 Pitt St. E. obligingly rolled all of the station’s apparatus out onto the street for a group photo. And an impressive array of state-of-the-art firefighting power it was. The lineup included two pumpers, an aerial ladder truck, a city service hook and ladder truck and the W.F.D.’s Service Car – a “flying squadron” that responded to every box alarm or structure fire in the city.

One by one over the following decades all of these rigs were eventually retired from service and disposed of. Remarkably, two of them are still around today — 72 years later after the group photo was taken. Later renumbered Engine No. 1, the 1925 LaFrance pumper was donated to the Historical Vehicle Society of Windsor in 1959 and is on display today in the HVSO’s Canadian Automotive Museum near Essex. Retired in 1967, the 1936 LaFrance aerial was headed to the scrapyard when its V-12 tractor was rescued. It’s owned today by a fire apparatus collector in St. Louis, Missouri who has attached the ex-Windsor tractor to the trailer of a 1938 ALF aerial from Ann Arbor, Michigan.