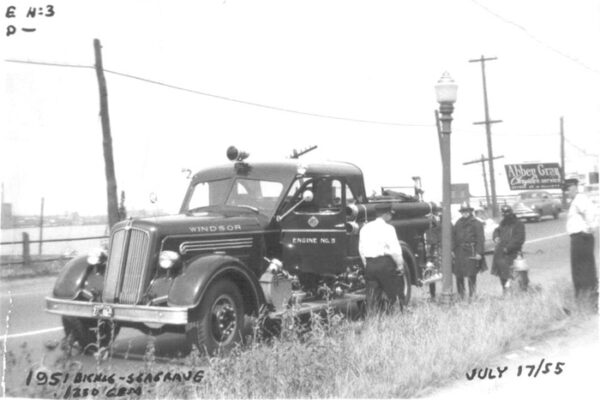 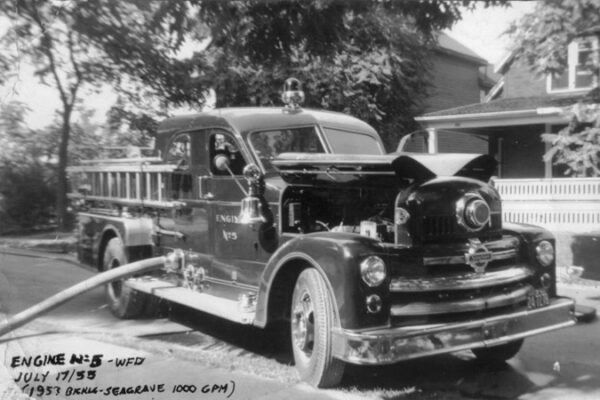 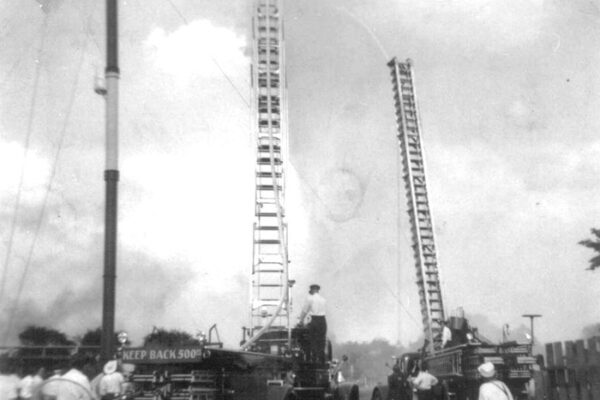 Windsor Aerials 2A and 3A in action at CKLW-TV

Windsor’s first television station – CKLW-TV – took to the airwaves in the fall of 1954. For many years Channel 9’s tall red-and-white-painted transmission tower behind the new TV station building on Riverside Drive West at Crawford Avenue, loomed high above the Windsor skyline.Over the years, television has been an effective public and community relations medium for the Windsor Fire Department which continues to rely the local television outlet to get important fire safety and fire prevention information out to the public. CKLW-TVs successor — CBET-TV — is equally supportive of the Windsor Fire & Rescue Service to this day.

Ten months after CKLW went on the air, the Windsor Fire Department teamed up with the new TV station to put on a thrilling public demonstration of its modern apparatus and firefighting prowess. On Sunday, July 17, 1955 fully two-thirds of the Windsor fire Department participated in a live television broadcast from the back lot behind the TV station. The W.F.D. was featured on a locally produced adventure program called Danger Is My Living.

Before the 2:00 p.m. broadcast began, apparatus from the W.F.D. Headquarters station on Pitt St. E. was carefully staged at the foot of Pitt St. W. at Caron Ave. A few minutes into the program a small wooden shack erected for the purpose was set ablaze – under the watchful eyes, of course, of Windsor Fire Prevention officers. On cue, the “alarm” was turned in.

Sirens screaming and red lights flashing, Engine 5, Rescue 1 and two aerial ladder trucks came tearing down Riverside Drive, turned left onto Crawford Ave. and into the “fire scene” behind the TV station. Engine 4 came flying down Crawford Ave. from Station 6 on Mill St. And Engine 3 rolled in from Station 2 on Walker Road, catching a hydrant on Riverside Dr. Hose lines were stretched, two aerial ladders rose into the summer sky, and the blaze was snuffed out as the TV cameras rolled. There was even a mock “rescue” from the doomed building.What a spectacle it was! You had to be there, and I was – a bicycle-riding 16-year-old high school student who loved fire engines. Only a week before I had made my very own TV debut on the same station’s Justice Colt show, showing off my collection of scratch-built fire engine models.

Way too soon it was all over. Ladders were lowered, hose lines rolled up and the rigs headed back to their stations. But the memories of that amazing TV spectacular are still with me more than half a century after it all happened. To heck with Oprah and American Idol – I’ll take WFRS Live anytime!