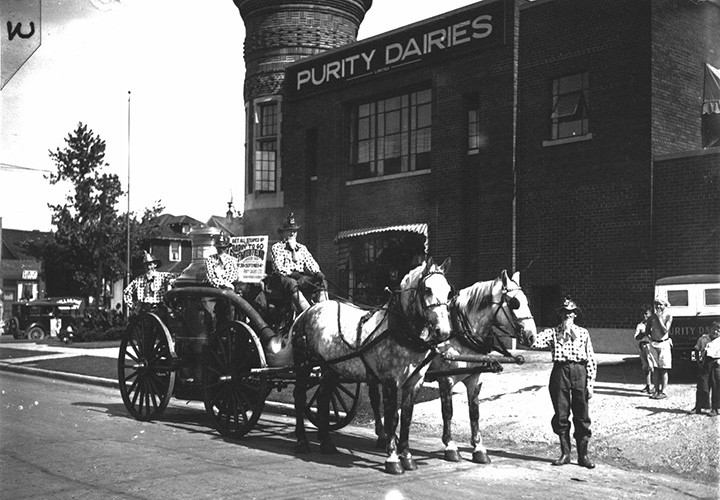 All Fired Up and Ready To Go

MYSTERY STEAMER – This interesting photo was taken sometime in the 1930s as Windsor’s annual Labor Day parade formed up. After marching down Ouellette Ave., the parade concluded at Jackson Park, where the Windsor Fire Fighters Field Day was under way. The Windsor Fire Department’s novelty entry was sponsored by Purity Dairies. The photo was taken on Shepherd St. just west of Howard Ave. The former Purity Dairies building with its distinctive cylindrical corner tower is still there today.

The sign on the old horse-drawn steam fire engine reads…” Get All Steamed Up…. Raring to Go. Windsor Fire Fighters Field Day, Jackson Park, August 30 – September 4”. Unfortunately, the sign doesn’t show the year. It isn’t known where the Windsor firefighters got the old steamer: Windsor’s only steam fire engine, purchased in 1868, had been retired and disposed of many years earlier. Note the fine two-horse hitch of dapple greys, and the clown firefighter attire on the four “smoke-eaters” riding on the old engine. We’d love to know the year and make of the steamer, and where it came from. Most of the remaining survivors of the colorful horse-drawn steam fire engine era later fell victim to Secord World War scrap metal drives. – Walt McCall Collection