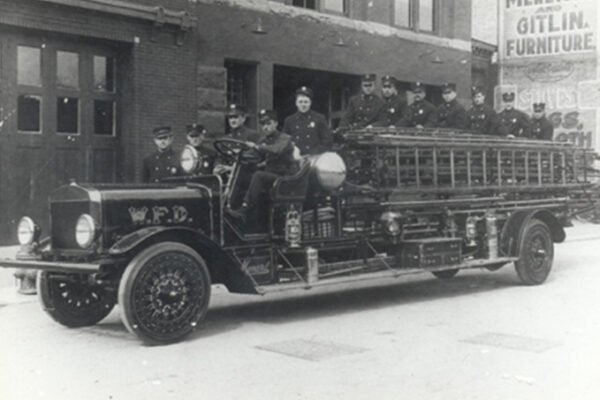 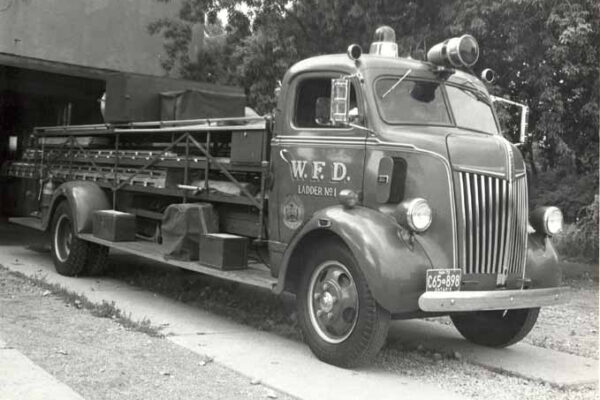 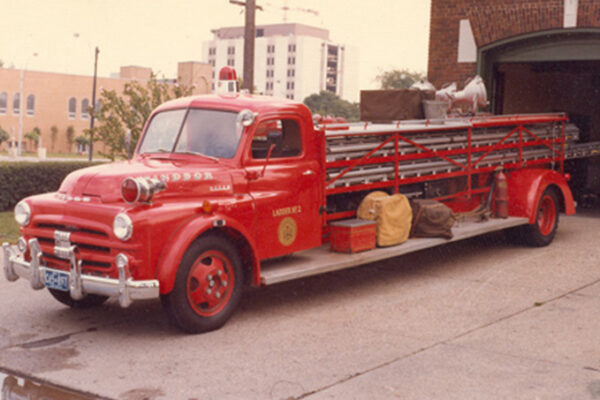 Before there were aerial ladder trucks and firefighting elevating platforms, there was the City Service Ladder Truck.

Visualize, if you can, an aerial truck without the aerial ladder. Also sometimes called a service truck or service ladder, the city service ladder truck was a long-wheelbase, straight-frame apparatus designed to transport an assortment of portable ground ladders to the fire. These typically ranged from short attic and roof ladders to massive 55-foot, three-section extension ladders with fly poles which required six or eight burly firefighters to carry and raise them.

While most city service hook and ladder trucks were of the straight-frame type, some big-city models had tiller rear steering. Many city service ladder trucks were equipped with soda-and-acid chemical tanks and hard rubber hose for extinguishing small fires. In the 1920s several manufacturers – notably American-LaFrance and Seagrave – began mounting pumps and hose trays on their Combination Service Trucks. Thus was born the quadruple combination, or “quad”.

Over a period of nearly four decades, the Windsor Fire Department acquired six city service ladder trucks. The first, purchased in 1916, was built on a locally-made Menard commercial truck chassis. This apparatus proved less than satisfactory, however, and a few years later the notoriously underpowered ladder truck was sent to the American-LaFrance plant in Toronto where it was rebuilt and repowered. Ladder No.1 remained in service until the early 1940s.

The 1941 Ford was moved to Station 6 on Mill St. in mid-1952 when a new Bickle-Seagrave service aerial was delivered. The ex-Sandwich 1927 Gotfredson/Bickle ladder truck was sold to Elcombe Engineering, which used it to move truck bodies around the company’s yard on Russell St.

By the early 1950s, old Ladder No. 3 was showing its age. In the spring of that year the city purchased a long-wheelbase Dodge truck chassis from Ambassador Motors for $2,425.00. Over the next eight months the W.F.D. shops on Richmond St., next to Station 2 equipped it as a city service ladder truck. Like the cab-over-engine Ford built twelve years earlier, the Dodge also carried a full complement of metal ground ladders, an Eastman deluge nozzle mounted on a diamond-plate deck behind the cab, and several big floodlights. The new Ladder No. 2 was placed in service at Station 3 on October 21, 1952.

The 1924 LaFrance was later stripped of its ladder racks and sold to Emancipation Day promoter Walter Perry, who planned to use it as a float to carry beauty pageant contestants in Windsor’s annual Emancipation Day parade. This conversion was never done, however, and the old LaFrance was quietly hauled off to the junkyard a few years later.

Ladder No. 2 spent most of its fire service career at Station 3 where it ran with Engine No. 8, a 1948 LaFrance pumper. The Dodge’s standard six-volt electrical system was barely strong enough to power the big Sterling Model 30 siren bolted to its left front fender and the small red beacon light on the cab roof.

With the amalgamation of Riverside, Sandwich East and parts of Sandwich West Township in 1966, the 1941 Ford ladder truck was transferred to the former Sandwich West fire hall on Third Concession Road. Ladder 1’s final assignment, in the early 1970s, was at the new Station 6 on Tecumseh Rd. E. at Ferndale.

When the old Station 3 at Turner and Tecumseh Rd. was closed in the early 1970s, Ladder 2 went to the new Station 3 on Edinburgh St. With the delivery of two new aerial ladder trucks in 1980 and 1981, the Dodge became a spare, filling in for other ladder trucks in the W.F.D. shops for maintenance or repairs.

After several years of storage, old Ladder No. 1 was sold at auction in late 1978. Purchased by a vehicle collector in Tecumseh, the one-of-a-kind 1941 Ford was stripped of its ladder racks, shortened and converted into a flatbed water tank truck.

After some 30 years of service, the 1952 Dodge ladder truck was sold to an individual in Rochester Township in mid-1982. Old Ladder No. 2 was later acquired by Matthew Lee, an antique fire apparatus collector in Plymouth, Michigan.

Converted into a flatbed transporter, Mr. Lee used the old Dodge to carry his antique fire engines to parades and musters. The worn-out old Dodge was finally junked in the U.S. about ten years ago.

Thus ended the city service ladder truck era on the W.F.D. After 1952, only aerial ladder trucks were purchased.