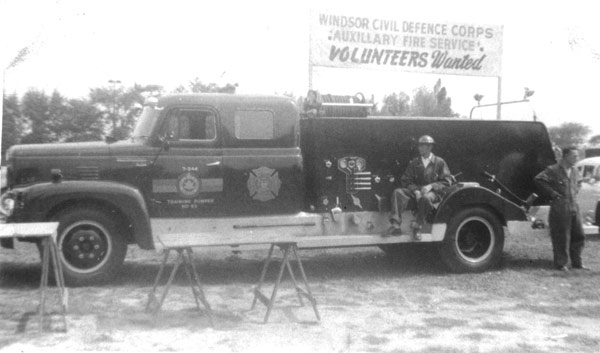 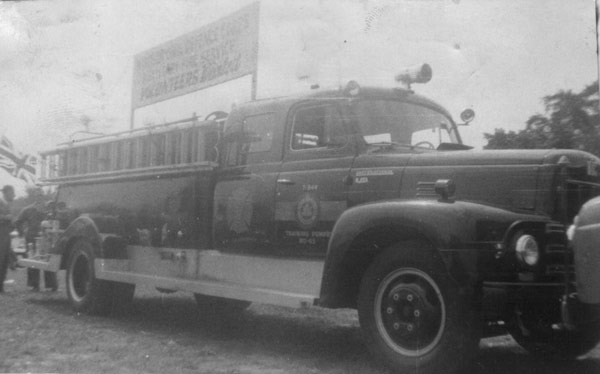 In the early 1950s – at the height of the Cold War scare – the Canadian federal and provincial Governments provided special funding to bolster the firefighting and rescue capabilities of metropolitan fire departments in the event of a nuclear attack by Russian bombers. Civil Defense and Emergency Measures Organizations manned by local volunteers were formed across Canada, including here in Windsor.Canada’s Civil Defense authorities funded the purchase of 50 special Training Pumpers which were allocated to fire departments across the country for the use of volunteer auxiliary firefighters, who would be trained in their use by members of the larger fire departments.

Contracts for these Civil Defense Training Pumpers were awarded to two Ontario firms – Bickle-Seagrave Ltd. of Woodstock and Marsh Pumps (Canada) Ltd. in Stratford. The 40 Bickle-Seagrave pumpers, with 420 Imperial gallon-per-minute pumps, were built on Chevrolet chassis. Ten slightly larger 625 gpm pumpers were built by American Marsh on International R-185 chassis. All had extended seven-man crew cabs. Civil Defense Canada emblems on the cab doors were augmented by the Ontario Civil Defense maltese cross logo on the rear of the cab.

One of the 1952 Bickle-Seagrave/Chevrolet Training Pumpers was assigned to the Windsor Fire Department. Housed at Fire Station No. 2 on Richmond St. at Walker Rd., the pumper was used for regular weekly training sessions by the Windsor Civil Defense Corps. Auxiliary Fire Service. Two years later the Chevrolet was replaced by Training Pumper No. 45 – one of the larger Marsh/ Internationals. The 1953 International remained at Station 2, in one of the two bays at the rear of the hall facing Walker Road, for more than a decade. In its later years this pumper was occasionally used as a spare pumper by the W.F.D.

In 1967, as international tensions eased and the threat of nuclear war lessened, the civil defense organizations were disbanded and the training pumpers returned to the government. Many of these low-mileage pumpers were then sold as government surplus to rural and volunteer fire departments all over Ontario. A few are still on the road today, still owned by fire departments or in the hands of collectors.