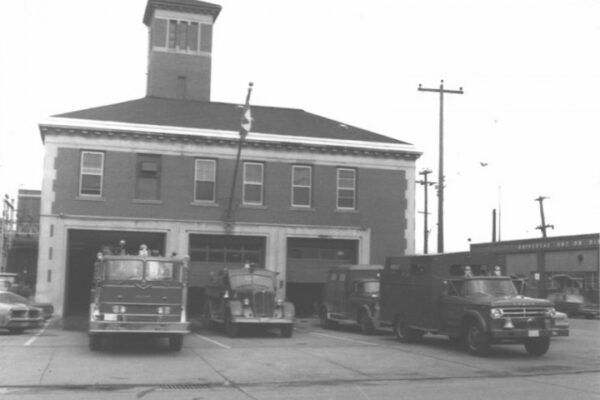 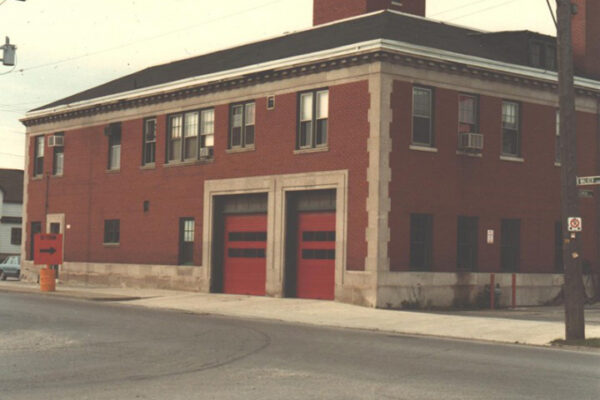 East side of old Station 2 with two service bays

In most cities, Fire Station No. 1 is Fire Department Headquarters – a municipal showcase housing the largest complement of fire apparatus (including the Chief’s car) as well as the department’s administrative, fire prevention and fire alarm communications offices.

But for the first third of the last century, Windsor’s Fire Department Headquarters station at 254 Pitt St. E. across from the City Market, was the W.F.D.’s Station #2. Station 1 was on Wellington St. just north of Wyandotte St. W. and Station 3 on Langlois Ave. While Stations 1 and 3 were single-bay, bungalow style stations housing a single piece of apparatus, Fire Department Headquarters was an imposing three-story brick structure with four apparatus bays crammed with two pumpers, two ladder trucks, a rescue squad car, salvage truck, the department’s ambulance – and the Chief’s and Assistant Chief’s cars.

But this all changed in July of 1935 when the City of Windsor annexed the neighboring towns of Sandwich, Walkerville and East Windsor. The former Sandwich Fire Hall and two Walkerville fire stations were integrated into a much-enlarged Windsor Fire Department. Windsor’s headquarters station was finally renumbered Station 1. The Walkerville halls were designated Windsor Stations 2 and 3. The Langlois Ave. hall became Station 4, the Wellington St. hall No. 5 and the former Sandwich fire hall on Mill St. became Station 6.

Windsor’s new Station 2, on Huron St. (now Richmond St.) at Walker Road was an impressive two-story, three bay hall with tall hose drying tower at the rear. Built by the Town of Walkerville in 1927, the station also had two vehicle bays facing Walker Rd. Station 2 housed two pumpers and an aerial ladder truck (Engines 2 and 2A and Aerial No. 2A) as well as the District Chief’s car. A GMC hose truck was added to the station’s roster during the Second World War.

A heavy rescue squad truck was assigned to Station 2 in 1964, covering the east side of the city. For many years the W.F.D’s Fire Prevention Office was on the second floor of Station 2. The Windsor Fire Department Apparatus shops and Signals Division occupied the former Walkerville Public Market building next door to Station 2.

Station 2 was Windsor’s second-largest – and second busiest – hall for 48 years. In 1983 the station was closed and demolished to make way for a new Station 2 on the same site. The modernistic single-story new Station 2 with its distinctive sloping roof and three drive-through apparatus bays opened in 1984. During the one-year construction phase, Station 2’s crew occupied temporary quarters in a rented building just up the street on Walker Rd.

Until the new Station 7 opened in May 2012, the “new” Station 2 was the last new fire hall Windsor built in 28 years.