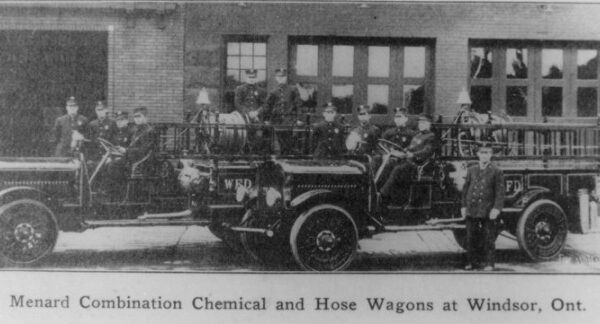 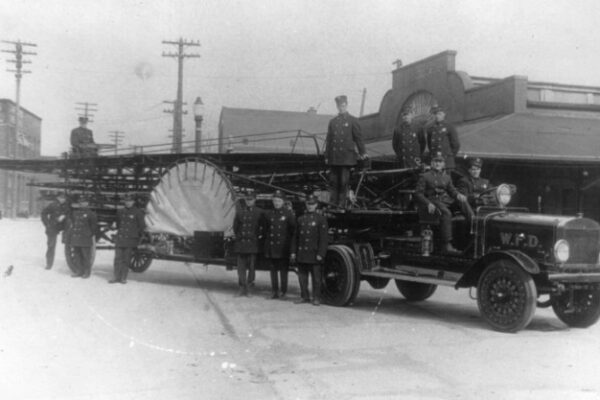 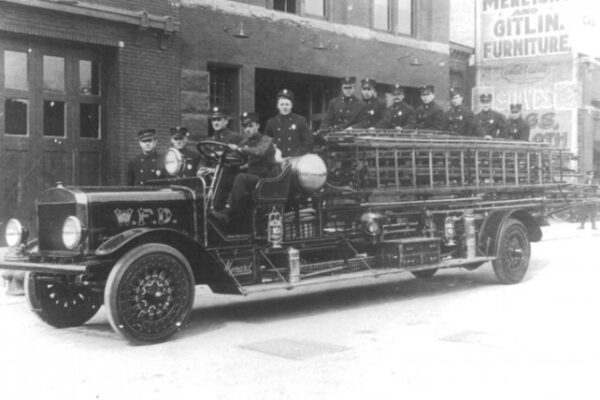 In 1915 and 1916, the Menard Motor Truck Company built four pieces of motor fire apparatus for the Windsor Fire Department. Windsor’s first motor-driven fire apparatus was a big Seagrave Model WC-96 pumper built by the W.E. Seagrave Fire Apparatus Co. of Walkerville in 1914. But the W.F.D.’s two horse-drawn hose wagons couldn’t keep up with the much-faster motor pumper, so a decision was made to replace the horse-drawn rigs with a pair of motor hose combinations.

Purchased at a cost of $4,000 each, the two Menard Motor Combination Hose and Chemical Wagons were delivered in May, 1915 and placed into service at Station 1 on Wellington St. and Station 3 on Langlois Avenue. The chain-drive Menards rode on solid rubber tires and had 35-gallon soda-and-acid chemical tanks mounted behind the driver’s seat, connected to a hose reel above the hose body.

Menard built two more motor trucks for the Windsor Fire Department in 1916 – a four-wheel auto tractor to replace the horses that pulled the department’s 1910 W.E. Seagrave 85-foot aerial ladder truck, and a straight-frame Combination City Service Hook and Ladder truck with chemical equipment. When the two motorized ladder trucks were placed into service at Station 2 on Pitt St. E. on Christmas Day 1916, the Windsor Fire Department’s last fire horses were retired and put out to pasture.

The two Menard motor hose combinations and aerial truck tractor apparently gave good service — but the big city service ladder truck wasn’t nearly as satisfactory. Badly underpowered, it was sent to the American-LaFrance Fire Engine Co. of Canada plant in Toronto in 1920 where it was completely rebuilt at a cost of $6,000.

The two Menard motor hose wagons were retired following the purchase of American-LaFrance triple combination pumpers in 1923 and 1925. Both were sold – for $500 each – in 1926. The Menard/Seagrave aerial was retired when a new American-LaFrance aerial was delivered to Windsor in 1936. The trailer was broken up for scrap but the Menard tractor was sold to a Mr. B. Jasperson of Kingsville. The 1916/1920 Menard/LaFrance service ladder truck was replaced by a new shop-built Ford cab-over-engine ladder truck in 1941 and scrapped.

Menard commercial trucks were built in Windsor from 1910 until 1920, when the Menard Motor Truck Company was sold to the Maple Leaf Manufacturing Co. of Montreal.