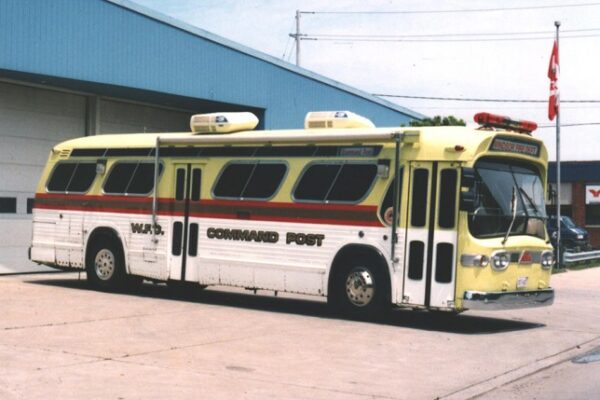 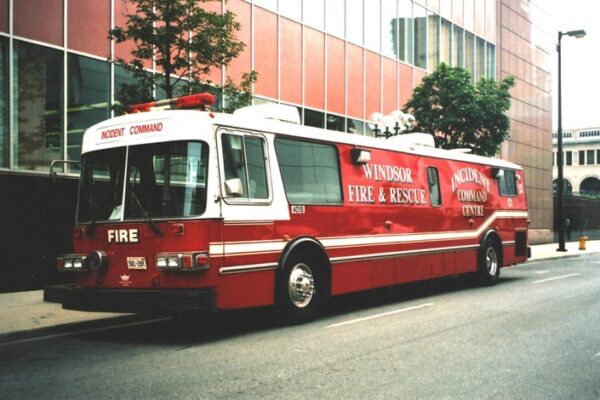 In the good old days, it wasn’t hard to find the Chief Engineer on the fireground — he was the commanding figure in the white helmet and coat, barking orders to his men through his speaking trumpet.

Firefighting has changed a lot since then, of course, and incident command is a vital function at fires and other major public emergencies. One thing that hasn’t changed is the need for a designated location on the fireground where command officers and other specialists – rescue, Hazmat, structural, gas and power utilities etc. — can implement carefully pre-planned strategies for handling major incidents with maximum safety for firefighters, other first-responders and the public.

In 1961, the Windsor Fire Department purchased its first Command Car – a Chevrolet station wagon that was more than just transportation for a District Chief. Equipped with the department’s first electronic siren — which could also be used as an external public address system — the Command Car was a highly visible nerve centre at the fire scene.

As firefighting became far more complex and scientific, a need arose for a more advanced fireground command vehicle. In the early 1980s, the W.F.D. acquired a recently-retired 1965 GMC transit coach (bus) from Transit Windsor, which the W.F.D. shops converted, over the next two years, into its first dedicated Mobile Command Post. In addition to a well-equipped “office” with all of the latest radio communications equipment, maps, hazmat data, mini-kitchen and a conference table, the Mobile Command Post also served as an on-site rehabilitation centre, where weary firefighters could take a well-deserved break out of the winter cold or summer heat. A retractable awning on the right side of the fully air-conditioned coach could be lowered for shade when the unit was pressed into long-time summer service.

After nearly two decades of service, the big GMC coach was replaced in 2001 with a far more modern and advanced custom-built Incident Command Centre. Based on a 1985 Orion motorcoach, the WF&RS’s white-over-red, Incident Command unit is a familiar sight at large public gatherings in Windsor, as well at the scene of major fires or other emergencies. As with its predecessor, the Orion ICC is also used as a firefighter (or public) rehab unit in extreme cold or hot weather.

Not regularly manned, the Incident Command Centre is dispatched as-needed on a special call basis. Among the largest vehicles on the WFRS apparatus roster, the mobile ICC has been housed at various Windsor fire stations including the Headquarters hall on Goyeau St., Station 2 at Richmond and Walker, and Station 5 on Cabana Road.