The introduction of the first successful steam fire engine in Cincinnati, Ohio in 1852 revolutionized firefighting in North America, precipitating as it did the replacement of often rowdy, politically powerful volunteers with the first paid, professional fire departments. The romantic era of the steam fire engine – immortalized by classic images of a straining three-horse hitch with flared nostrils, flying hooves and billowing smokestack – spanned a period of precisely 65 years culminating with the delivery of the last steam fire engine in 1917.

As far as can be ascertained, the Windsor Fire Department had only one horse-drawn steam fire engine in its long history. As was the case in many towns and cities, the acquisition of the city’s only steam fire engine was a belated response to an emergency rather than the result of any visionary planning. Six months to the day after Canada’s birth as a nation, on December 1, 1867, Windsor’s downtown area was devastated by yet another disastrous fire. The bustling town’s only fire engine – a puny hand engine dependent solely on the muscle power and endurance of the volunteers who manned its long handles – was simply no match for the flames that raged through building after building.

Goaded into action by this most recent calamity, the Windsor Board of Trade met the following evening and with little discussion urgently recommended the immediate purchase of a steam fire engine. City council voted the then very substantial sum of $6,000 for this purchase – plus 1,000 feet of hose. A “Second Size” steam fire engine of the latest design was ordered from the Amoskeag Mfg. and Iron Works of Manchester, New Hampshire. Founded in 1859, Amoskeag was one of America’s largest and most prominent steam fire engine builders.

The new fire engine arrived in Windsor on May 15, 1868 and was tested and accepted by the city four days later. A new fire company was formed to man the machine, which was housed in a small frame firehouse erected soon after at the corner of London (now University Ave. W.) and Church Sts. Drawn by two horses, the steamer, which bore Amoskeag factory serial number 279, towed a two-wheel “jumper” or hose cart. The second-size engine’s double-acting, vertical piston pump was rated at a respectable 700 gallons-per-minute. 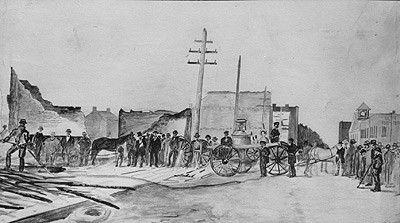 The Amoskeag steam fire engine formed the backbone of Windsor’s firefighting forces for approximately the next two decades. But from the late 1880s on there is virtually no record of what happened to it – how long it remained in service, its eventual replacement or disposition. Well-maintained steam fire engines typically remained in service for 20-30 years or more. No records or photos have been found seem of the Amoskeag engine in the 1890s or into the early years of the new century.

Windsor did not purchase its first motor-driven pumper until 1914. Dependable as it was, it is unlikely that the 1868 Amoskeag remained in service for 46 years, or nearly half a century. It’s an enduring mystery – we hope to eventually unravel.