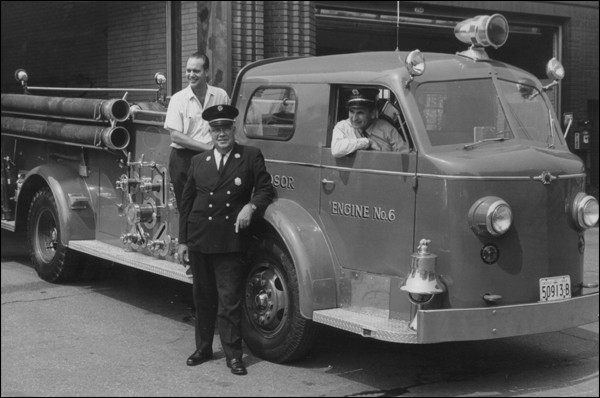 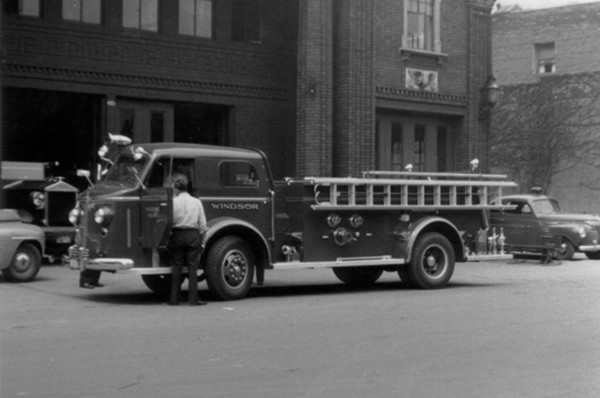 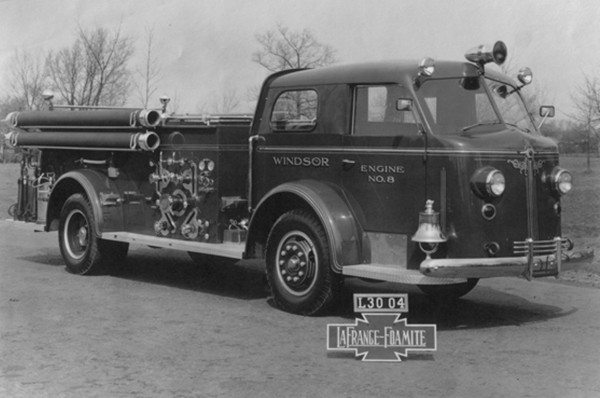 Immediately following the Second World War, Windsor’s firefighting fleet was in dire need of modernization. The city’s last new pumper had been purchased in the mid-1920s, and only one new piece of apparatus – an aerial ladder truck – had been purchased during the entire decade of the 1930s.The Windsor Fire Department’s postwar modernization program began in 1946, when the W.F.D. placed orders for a new pumper and a 100’ aerial. A huge backlog in factory orders for new fire apparatus by Canadian fire departments which had to “make do” through the depression and the Second World War resulted in long waits for new equipment — typically two to three years.

Just after the war, industry leader American-LaFrance announced a radical new type of cab-forward fire apparatus design. In the company’s revolutionary 700 Series fire engines, the motor was placed behind the front axle, resulting in compact overall vehicle dimensions and excellent forward visibility for the driver. The breakthrough 700 set the standard in modern fire apparatus design, and basically the same configuration pioneered by the 700 Series six decades ago is still widely used by the industry today.

Windsor received the third of these advanced-design pumpers built by American-LaFrance’s Canadian subsidiary factory in Toronto. Delivered to Windsor on April 21, 1948 – more than two years after it was ordered at a contract price of $19,560 — the Model 710-PJC Spartan was Windsor’s first closed-cab pumper. Two firefighters rode in rear-facing jump seats in the canopy style cab and three more on the broad rear step. Powered by a 215-horsepower V-12 engine and bearing factory serial number L-3004, Engine No. 8 was equipped with an 840 gallon-per-minute pump and 125-gallon booster tank. The pride of the department, the ultra-modern pumper was placed into service at the headquarters station on Pitt St. E. a few weeks later, replacing a1929 Bickle pumper the W.F.D. had acquired through the annexation of Walkerville in 1935.

With the delivery of another new pumper in 1950, Engine No. 8 was transferred to Station 2 on Walker Rd. at Richmond St. Two years later Engine 8 was again reassigned, this time to Station 3 on Turner Rd. at Tecumseh Rd. E. The 1948 LaFrance pumper covered the city’s east side for 12 years — but its long service life there came to an abrupt end when the pumper was heavily damaged in a collision at Tecumseh Rd. E. and Walker Rd. in 1964. After repair and overhaul in the W.F.D. shops, the pumper was repainted and relettered Engine No. 6. While the pumper got a fresh coat of bright red paint, all of its fancy gold-leaf striping and trim was gone resulting a bland, rather austere appearance.

Engine 6 then became a spare pumper, filling in for other apparatus that was in the shop for maintenance or repair.

Twenty-six years after its delivery, the old LaFrance was literally worn out. In early 1974 it was stripped of its motor, pump and other usable parts, and on the drizzly afternoon of March 15, 1974 the 1948 American-LaFrance made its last run – at the end of a tow chain. It was ignobly hauled to the East Windsor Auto Wreckers yard on Drouillard Rd. and – for $175 – sold for scrap.