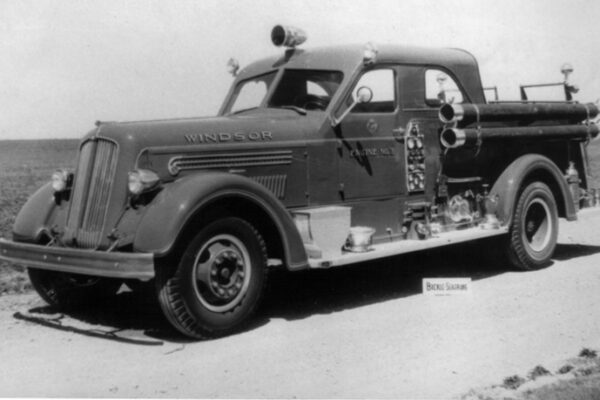 This is the factory portrait of the 1950 Bickle-Seagrave. 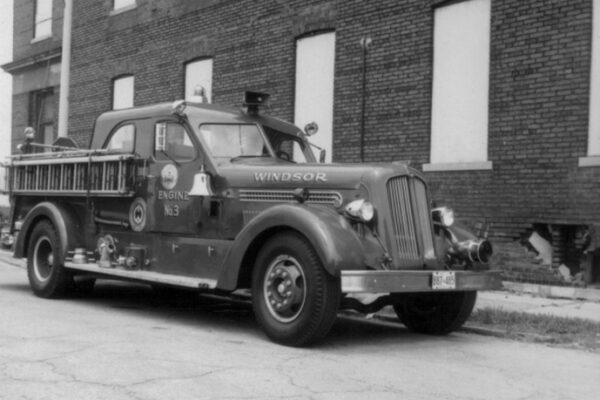 After repainting in 1967. The siren was moved from the roof to the front bumper. 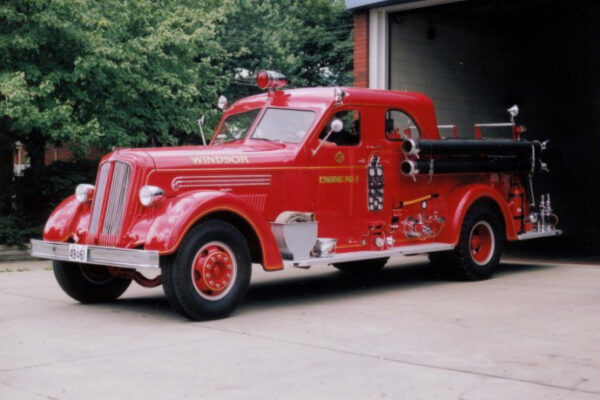 Restored to Perfection! On the ramp at Station 2 in 2001.

As the nineteen-fifties began, Windsor’s pumper fleet was urgently in need of modernization. Most of the city’s front-line pumpers were wide-open, chain-drive relics of the 1920s. The Windsor Fire Department had purchased only one new pumper since 1925 – a cab-forward American-LaFrance delivered in 1948.

In the Late 1940s, Chief Hedley G. Coates and his senor officers drew up an apparatus replacement plan which mandated the purchase of at least one new pumper over the next three years. City Hall concurred, and the first order was placed with Bickle-Seagrave Ltd. of Woodstock, Ontario in early 1949.

And so it was that a handsome new Bickle-Seagrave triple combination pumper was delivered to the Windsor Fire Department on May 16, 1950 at a contract price of $22,990. So urgent was the need for new apparatus that the factory-fresh pumper was placed into service at the Pitt Street headquarters station just four days later! Lettered Engine No. 3 on its cab doors, the shiny new pumper replaced a 1922 American-LaFrance which was traded in to Bickle-Seagrave.

The Model JB-12 pumper – the largest and most powerful then made by Seagrave — was powered by a 900 cubic inch V-12 engine linked to a 1,050 gallon-per-minute pump. A 150-gallon booster tank was connected to a booster hose reel on the rear step. Three or four firefighters rode on a full-width, rear-facing bench seat under the rear roof canopy. Entry to the crew seat was through a narrow aisle between two hose beds. A big Sterling 30 Sirenlite was mounted on the cab roof above the windshield. The traditional fire bell was mounted on the right-hand cowl.

Bearing factory Serial # F-510.- and W.F.D. radio call sign Car 44 – Engine 3 covered the downtown area out of the headquarters station until late in 1952, when another new Bickle-Seagrave pumper was delivered. The two-year-old Bickle-Seagrave was reassigned to Station 2 on Walker Road at Richmond St. The `50 Bickle responded to alarms out of this hall for an incredible 21 years – the longest continuous assignment out of the same station for any rig in WFD history.

In 1967, Engine No. 3 was overhauled and repainted a dark shade of red. When it returned to service a few months later, all of its fancy striping and trim were gone. The ageing Engine 3 entered the twilight phase of its long service career in 1977, with the delivery of four lime-yellow Pierreville-Ford pumpers to the W.F.D. – one of which was lettered Engine No. 3. The 1950 Bickle-Seagrave became a spare, filling in for other pumpers in the shops for service or repair. When its V-12 motor developed problems in the late 1970s, Engine 3 was placed into storage in an empty bay at Station 2.

Sometime in the early 1980s, the 1950 Bickle was sold to a group of Sandwich West Township firefighters who planned to restore it for use as a parade rig. As well-intentioned as they were, they were overwhelmed by the magnitude of the task and the old pumper was eventually sold again – this time to volunteer firefighter Mike Ouellette who hauled it out to his farm near Belle River. Mike eventually gave up on this ambitious project, too, and in 1993 sold the truck to fellow vintage fire engine buff David J. Wheeler of Ypsilanti, Michigan.

Mr. Wheeler could see beyond the pumper’s gray primer and rough appearance. What followed, starting in 1994, was a stunning, frame-up restoration. No expense or detail was spared. The motor was hoisted out of the chassis and totally rebuilt. Dave’s unwavering objective was a perfect reincarnation of the pumper to its original appearance. When Engine No. 3 emerged from Dave’s shop in the spring of 2001 it looked even better than it had the day it was delivered to Windsor 41 years earlier.

The beautifully restored pumper made its debut at an antique fire apparatus muster in Woodstock, Ontario in June of 2001. After the muster Dave, drove the pumper into downtown Woodstock, where he photographed it in front of the former Bickle-Seagrave plant where it had been built.

For its fourth owner, the born-again pumper’s crowning achievement was its triumphant return to Windsor on July 1 of the same year – where it joined the WFRS contingent in the big Canada Day parade. After the parade, Dave – assisted by the author – drove the engine back to the fire station where it had spent most of its career. To the astonishment of the on-duty crew, they backed old Engine 3 into its old stall. Who says you can’t go home again?

The 1950 Bickle-Seagrave continues to reside in glorious retirement at Dave Wheeler’s home. It’s a consistent prize-winner at antique fire engine shows and musters all over the U.S. and was featured in full color on the cover of Enjine!-Enjine! – the quarterly magazine of the Society for the Preservation and Appreciation of Antique Motor Fire Apparatus in America – better known as SPAAMFAA.