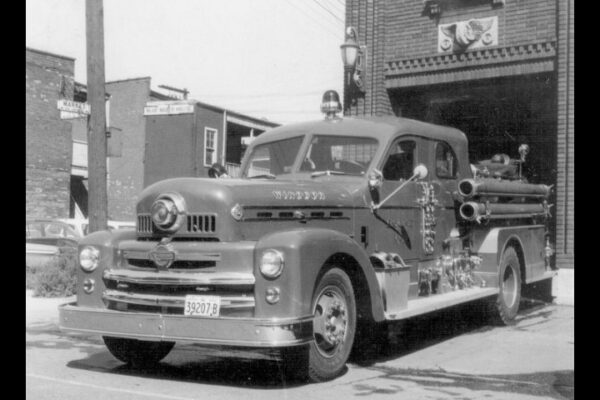 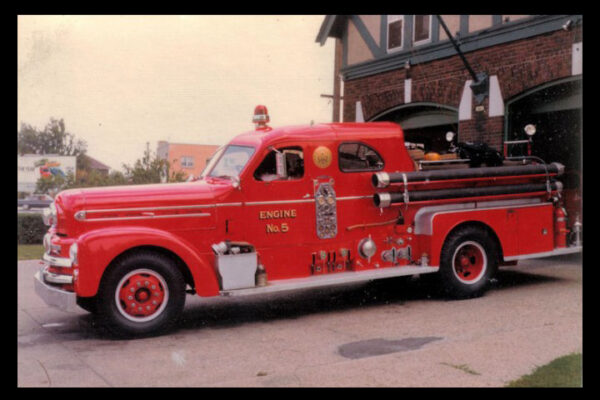 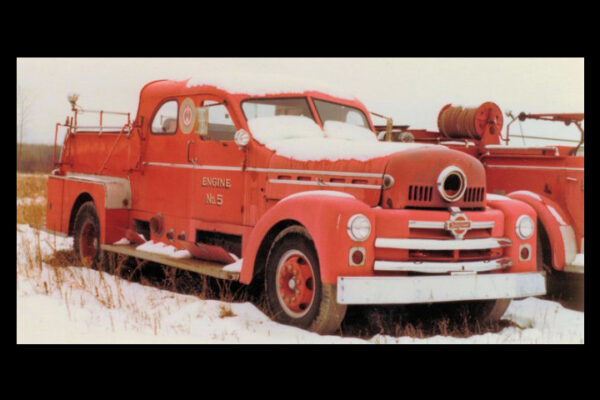 In 1951, The Seagrave Corporation of Columbus, Ohio — and its Canadian cousin, Bickle-Seagrave Ltd. of Woodstock, Ontario — marked Seagrave’s 70th anniversary as one of North America’s leading manufacturers of motor fire apparatus with the introduction of its first all-new postwar fire engine design.

Seagrave’s new 70th Anniversary Series pumpers and aerials featured a bold, new front end with two massive full-width chrome grille bars. But the new design’s most distinctive feature was the integration of the siren into the truck’s nose – just like the headlight on a modern diesel locomotive! The 70th Anniversary Series was among the company’s most successful designs, remaining in production for nearly two decades. Nicknamed the “Rudolphs”, the last one was built in 1970.

The Windsor Fire Department was among the first Canadian cities to order Seagrave 70th Anniversary Series apparatus, with two pumpers and a service aerial ladder truck delivered in 1952 and 1953.

The first of these was an impressive canopy cab pumper delivered to Windsor on December 29, 1952. Purchased at a contract price of $27,552.50, the sleek Model 900-B, bearing factory serial number #F-4405 was placed into service two days later at Windsor’s headquarters station on Pitt St. E. The shiny new Engine No. 5 replaced a 1919 American-LaFrance pumper that was subsequently scrapped. Powered by a 312-horsepower Seagrave V-12 engine linked to a 1,050 Imperial gallon-per-minute centrifugal pump, the 900-B was the largest and most powerful pumper Seagrave offered at the time. Windsor’s `52 was one of only a few equipped with a four-stage high pressure booster pump, and the city’s first apparatus with a beacon-type red warning light on its cab roof.

Engine No. 5 responded out of the Pitt St. hall for more than a decade – as the first-out, front-line engine until 1960, and then as the second or “back engine” for another five years. On August 31, 1963 Engine 5 was extensively damaged in a collision with a car while responding to an alarm on Wyandotte St. E. near Wellington St. The battered pumper was repaired and rebuilt by the W.F.D. workshop staff, repainted and placed back in service on January 27, 1964. The most visible exterior change was a heavy plank-type front bumper made by the workshop staff.

With the delivery of a new Mack pumper in 1965, Engine 5 was transferred to Station 3 on Turner Rd. at Tecumseh Rd. E. Following the delivery of four lime-green Pierreville/Ford pumpers in the summer of 1977, Engine 5 was taken in on trade and driven to the Pierreville plant in Quebec on July 18, 1977. Stripped of useable parts, it languished in a field behind the Pierreville plant until the mid-1980s, when it was finally hauled off for scrap.

The 1952 Bickle-Seagrave 70th Anniversary Series pumper served the city well for 25 years. A virtual twin, but with smaller pump and engine, was delivered the following year. The third of this siren-nosed trio was a 75’ service aerial also delivered in 1953. (See Aerial No. 3A under the Windsor’s Aerials section of this series).