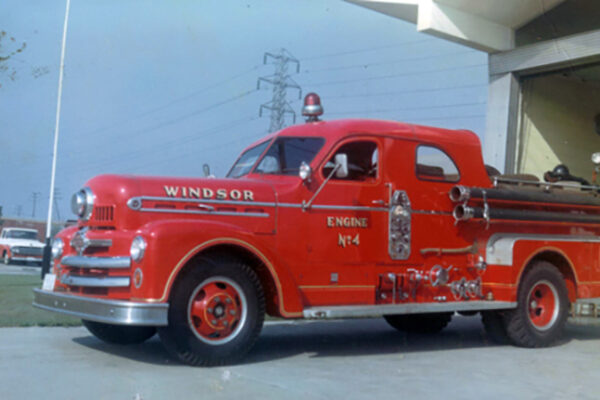 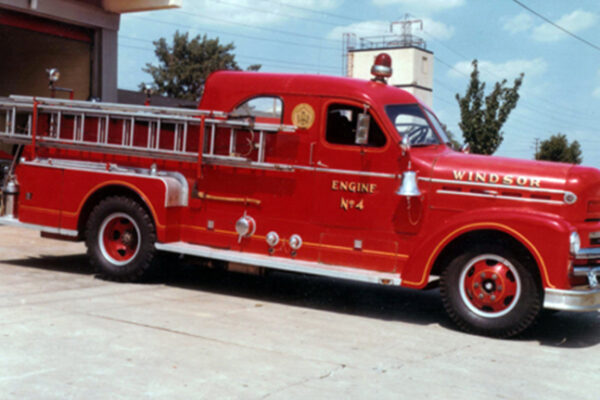 Engine #4, late in its career at Station #4, College Avenue 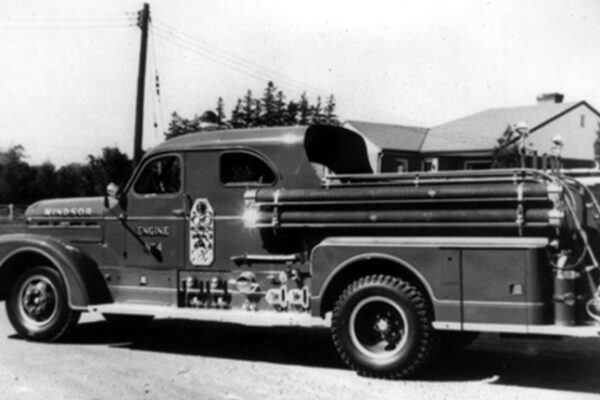 In Woodstock, ready for its delivery trip to Windsor, October 2, 1953

In 1951, the Seagrave Corporation – and its Canadian subsidiary, Bickle-Seagrave Ltd. of Woodstock, Ontario – marked its 70th anniversary with the introduction of a totally redesigned series of pumpers and aerial ladder trucks. The most distinctive feature of the bold, new 70th Anniversary Series design was the incorporation of the siren in the nose of the massive, full-width grille.The Windsor Fire Department purchased three of these classic siren-in-the-nose Bickle-Seagraves – a pumper and a 75’ aerial ladder truck in 1952, and a second pumper in the fall of 1953.

While they looked virtually identical externally, the 1952 and 1953 pumpers were quite different under their stylish sheet metal. Engine No. 5, the 1952 delivery, was powered by Seagrave’s largest motor – a 900 cubic inch, 300-horsepower V-12 and had a 1,050 gallon-per-minute pump. The 1953 Model 400-B pumper was powered by Seagrave’s “small” 202-horsepower, 462 cubic inch V-12 engine and had an 840 gpm pump. The big “J” model also had a high pressure booster pump and booster hose reel under the rear step. The booster hose on the `53 was coiled in an open well on the rear step, rather than on a reel. Both pumpers had seven-man rear entrance canopy-style closed cabs.

Bearing factory serial number F-9047, the shiny new Engine No. 4 was delivered to the W.F.D. apparatus shops on Richmond St. at Walker Road on October 2, 1953. A few weeks later it was placed into service at Fire Station No. 6 on Mill Street in the former town of Sandwich, replacing a 1930 Bickle 800 gpm pumper. Purchase price was $22,770 – less an allowance of $350 for a 1923 American-LaFrance chain-drive pumper (former Engine No. 3 and 4) traded in.

In July, 1964 the 1953 Bickle-Seagrave was transferred to the new Fire Station No. 4 on College Avenue, where it answered west-end alarms for another dozen or so years. In 1971, Engine No. 4 underwent a motor transplant – its original V-12 engine was replaced with a 534 cubic inch Ford V-8 truck engine. The 1953 Bickle-Seagrave’s fire service career came to an end with the delivery of four new Pierreville-Ford pumpers to the Windsor Fire Department in1977. On May 10, 1977 Chief of apparatus Mike Koehl drove the 1953 Bickle-Seagrave trade-in to the Pierreville Fire Trucks plant in Pierreville, Quebec where it sat in the plant yard for several years before being stripped and sold for scrap.

Ironically, the 1923 LaFrance pumper traded in 23 years earlier on the 1953 Bickle-Seagrave is still on the road today, owned by the North Gower, Ontario Fire Department as an antique parade piece!