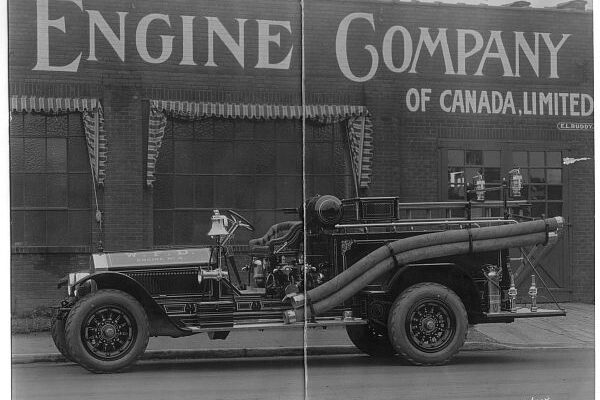 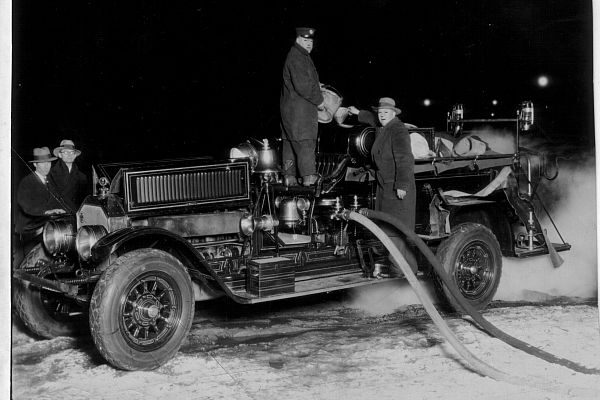 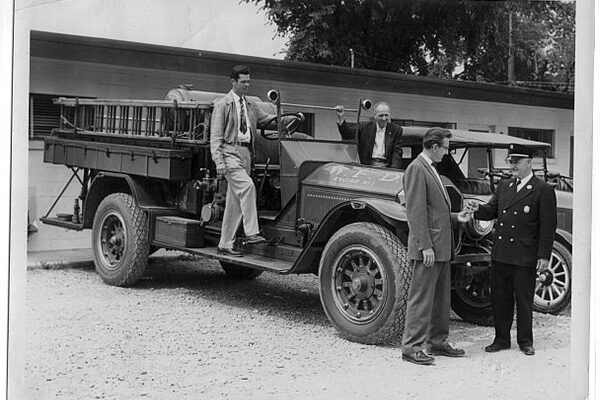 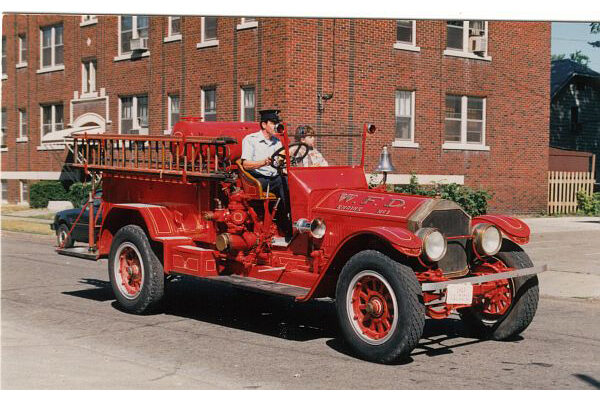 Engine 1 as it looks today

Of the four chain-drive American-LaFrance pumpers which served the Windsor Fire Department from the 1920s through the 1950s, the last one purchased had the most colorful, and distinguished, service life.Built by the American-LaFrance Fire Engine Company’s Canadian subsidiary plant in Toronto, the 800 gallon-per-minute Type 45 Triple Combination Pumper, Register #5170, was delivered to Windsor on August 15, 1925. Contract price was $15,500. Powered by a 120-horsepower, six-cylinder engine, the shiny new Engine No. 4 was placed in service in the Headquarters Station on Pitt St. E. across from the old City Market a few days later. The new pumper was a virtual twin to Engine 3 — the one purchased two years earlier — and similar in appearance to two others, built in 1922 and 1920.

Engine No. 4’s moment of glory came four years later, on the cold night of December 9, 1929 when the Windsor Fire Department alarm office received an urgent call for help from the City of Chatham. The old Garner House Hotel was in flames and the city’s entire downtown business district was threatened by one of the largest fires in the Maple City’s history.

Permission was obtained from Windsor’s Mayor and the crew clambered aboard for what is still the longest mutual aid run the W.F.D. has ever made. Engine 4’s motor roared to life and the open-cab pumper – which didn’t even have a windshield — roared out of the station into the cold, winter night. The fire’s glow was visible in the sky when Engine 4 wheeled into a Highway 2 service station near Tilbury for fuel. The 50-mile run took less than an hour. No time was wasted upon arrival at the fire scene. Hose lines were dropped off and Engine 4 headed for the nearby Thames River. A hole was chopped in the ice and the pumper’s suction hose lowered into the water.

Engine 4 pumped away all that night and well into the following morning. The Garner House lay in smoking ruins, but the inferno had been contained. It was a weary crew that reported back to the Pitt St. station with the grimy, ice-encrusted pumper late that afternoon.

In 1938, after 13 years of service, the 1925 American-LaFrance went into the W.F.D. shops next door to Station 2 on Richmond St. for a complete overhaul. A steel windbreaker and windshield were installed. The apparatus was repainted and renumbered Engine No. 1. The refurbished pumper saw service at Station 5 on Wellington St. and Station 2 before it was assigned to the spare fleet following the delivery of a new LaFrance pumper in 1948. Old Engine No. 1 regularly filled in when the newer engines went into the W.F.D. shops for maintenance or repairs.

But on July 1, 1954, the 1925 American-LaFrance proudly rolled down Ouellette Avenue once more, in Windsor’s huge Centennial Parade. Not long after, Engine 1 became embroiled in a political fiasco at City Hall. Mayor Michael J. Patrick and several councillors opposed Fire Chief Ovila Bezaire’s plea for replacements for the W.F.D.’s aging and outdated pumpers, most of which had been purchased in the 1920s. The mayor and council insisted the three old pumpers could be modernized for the price of one new engine.

A local antique auto club – the Windsor Branch of the Historic Vehicle Society of Canada – charged into the fracas and made a formal request to acquire the 1925 pumper for its antique auto museum. After a prolonged verbal battle, the old LaFrance was turned over to the antique vehicle club for the token sum of $1.00 on May 30, 1959. Nearly half a century later – far longer than the pumper was in service – the club still owns it.

The chain-drive American-LaFrance subsequently made two commemorative runs to Chatham – one in 1963 and another in 1967. Engine No. 1 rolled down Ouellette Avenue once, to celebrate Canada’s Centennial in 1967, and the centennial of the Detroit Fire Department later4 that same eventful year. With the author at the wheel, old Engine No. 1 also participated in several antique fire apparatus musters at Greenfield Village in Dearborn, Michigan in the 1970s.

About ten years ago the 1925 pumper was repainted and placed on permanent public exhibition in the HVSO’s new Canadian Transportation Museum at the Southwestern Ontario Heritage Village near Essex. Eighty-two years after it was delivered to Windsor, old Engine No. 1 is kept in running condition and remains fully capable of again fighting a fire if it had to!